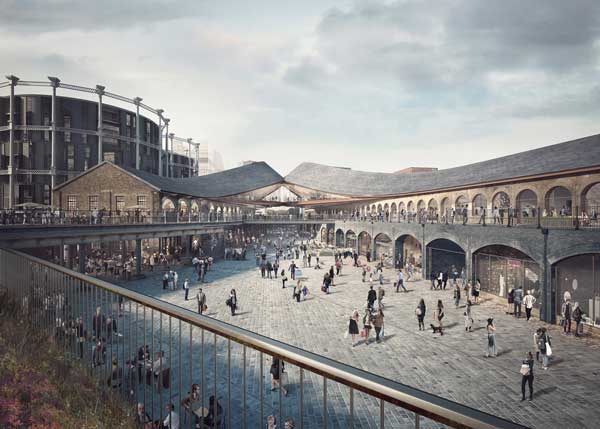 Designed by architect Thomas Heatherwick, the Coal Drops Yard retail scheme in London’s King’s Cross is due to begin its two-year construction programme in the coming weeks.

Located next to Regent’s Canal, Coal Drops Yard will include approximately 65 shops, including five large stores, as well as restaurants, galleries, music venues and a new public square.

The London-based Heatherwick Studio will renovate two existing buildings next door to the Central Saint Martins school campus, which were built in 1850 and used for storing coal arriving from the north of England.

The project will include a substantial steel element to form a distinctive main roof structure between the two existing buildings.

“These two historic structures were never originally designed for people to circulate through, and by themselves would have never made a successful retail destination if we did nothing more than clean them and fill them with shops,” said Heatherwick.

“The distance between them being too great to have any social chemistry with each other and only two storeys of activity would not create enough busyness and vitality.”

The 9,300m² project was commissioned by property developer Argent and is being led by King’s Cross Central Limited Partnership (KCCLP), which is overseeing the wider redevelopment of the area.