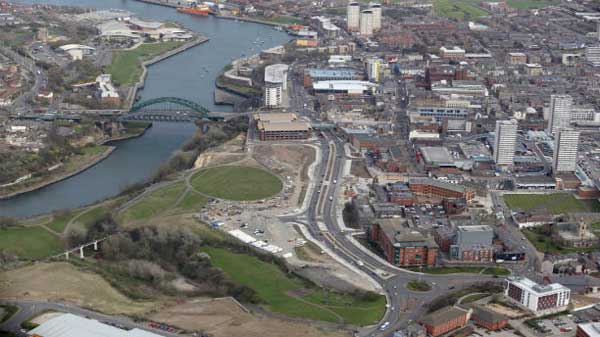 The former Vaux brewery site in Sunderland, which has lain dormant for more 16 years, is being redeveloped with a steel-framed office block representing the first phase.

Siglion, a joint venture between Carillion and Sunderland City Council, with Igloo Regeneration providing development, asset and fund management, is carrying out the work on the five and a half hectare site.

A materplan has been drawn up which includes a mix of uses for the site including offices, retail, restaurants and cafes, a hotel, residential apartments, a car park and leisure spaces. The plan will also create new public spaces with path and cycle routes along the River Wear cliff edge and through the site, with direct links to the city centre.

Groundworks are now under way for the first phase of construction work and the erection of a steel-framed office block is expected to start later this summer.

Councillor Paul Watson, Leader of Sunderland City Council, said: “Shaping Sunderland for the future is now under way, and this is the biggest regeneration Sunderland has ever seen to reality.”

More than 300 people lost their jobs when the Vaux Brewery closed in 1999 after 162 years. Several proposals for the site, including a Tesco superstore, previously failed to win planning permission.