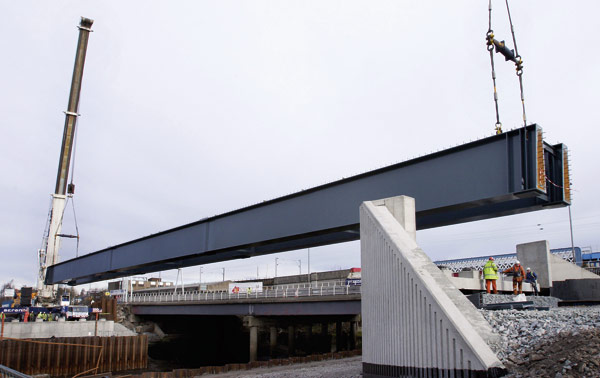 Main contractor Farrans opted for the most environmentally friendly and cost effective way of constructing a new bridge across Glasgow’s Kelvin River, a 61.5m single span steel girder believed to be the longest ever in the UK.

Grant Scholes, Project Manager for bridge designers Atkins said a construction method was required that would cause minimal disruption to the river while allowing workers to remain on either bank.

“A composite steel girder solution gave us the facility to crane in braced pairs of single span beams eliminating the need for work in the river channel,” Mr Scholes said.

Other important factors for choosing a single span steel girder, Scholes said, was the light nature of steel which allowed relatively easy craneage, while minimising loads to the piled foundation.

Steelwork contractor Fairfield-Mabey delivered the structure to site in 18 pieces which were then assembled into three 62.5m 128t braced pairs.

After four weeks of pre assembly on site, the three pairs of braced girders were lifted into position during one weekend possession.The procedure took only one day and was completed by two mobile cranes, one an 800t unit and the other 1000t machine. The cranes were positioned on the west and east abutments and lifted the braced pairs in tandem lifts.

The bridge is scheduled to open to traffic in June.