Tests on intumescent coatings have demonstrated that they will provide protection against explosion and hydrocarbon fire as well as severe natural cellulosic fires. Dr Bill Allen of Leigh’s Paints reports.

The Building Regulations for England and Wales, Approved Document B, entitled Fire Safety states “The building shall be designed and constructed such that, in the event of a fire, it will maintain its stability for a reasonable period”. What is a reasonable period?

The same document gives fire resistance periods in terms of building height and use. These vary from 30 to 120 minutes and also can depend on whether sprinklers (active fire protection) are installed in the building. The fire resistance periods are achieved by applying insulating products (passive fire protection) to the structural steel members in the building. These materials have to satisfy the requirements of BS 476: Part 21 Fire Testing Standard for the period designated by Approved Document B. Essentially this involves testing loaded and unloaded steel columns and beams at a UKAS approved laboratory. The fire test regime is based on a standard cellulosic fire in a furnace where the rate of temperature rise is controlled to meet the standard heating curve. The fire test results are then assessed and the thickness of passive fire protection required for each steel section is determined. One important class of fire protection materials frequently favoured by architects and designers are Intumescent Coatings.

Should these requirements be reviewed to improve fire safety in tall buildings?

There is currently no legislative requirement within the UK for structural steel assemblies (where gas, oil and chemicals are not a hazard) to carry out any further testing beyond the requirements of the Building Regulations. Specifically there is no requirement for any testing or approval against the effects of explosion and/or hydrocarbon fire. A similar situation prevails in the rest of Europe and the USA, where only cellulosic fire testing is required to the appropriate National Standard.

Since the events at the World Trade Center in New York on September 11th 2001 many questions have been asked about the fire protection of tall buildings around the world. In order to provide an additional level of confidence and to address some of these questions in advance of any specific requirements, Leigh’s Paints have subjected a number of Firetex intumescent coatings to explosion and hydrocarbon fire.

In September this year the opportunity arose to comment on the fire protection of tall buildings at the NIST Technical Conference on the Federal Building & Fire Safety Investigation of the World Trade Center Disaster.

On July 6th 1988 the UK had it’s own catastrophic fire event, the world’s worst ever off-shore oil disaster. A gas leak followed by explosion and fire left 167 dead. The fire was uncontrollable and evacuation was difficult. This event radically changed the oil and gas industry and it’s treatment of fire safety.

Today epoxy intumescent fire protection is widely used provided it has been shown to survive the rigours of explosion and hydrocarbon fire testing and in many cases jet-fire testing.

Can the on-shore construction industry learn some valuable lessons from these tragic events by adapting building codes to meet more demanding test requirements.

In the event that an explosion precedes a fire, to fulfil its role in protecting the underlying structure from a fire, the intumescent coating must remain intact and well adhered both during and after the explosion. Leigh’s Paints contracted Advantica Technology (formerly British Gas Technology) to conduct a gas explosion experiment to evaluate the resistance of Firetex thin film intumescent coatings to the explosion.

In addition to the above experiments Leigh’s were invited to place a steel column section coated with Firetex intumescent inside a fire compartment in a multi-storey test building at the Building Research Establishment in Cardington. This section of the building was then subjected to a severe natural fire exposure. The performance of this intumescent-coated steel section is also reported in this paper. 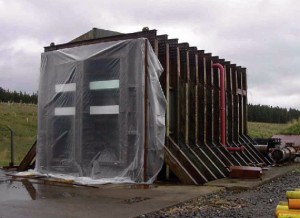 Figure 1: An explosion chamber at the Advantica, Spadeadam test facility 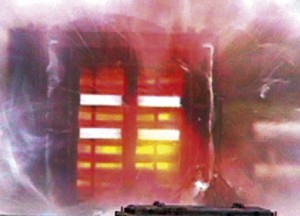 Figure 2: The test blast at its height 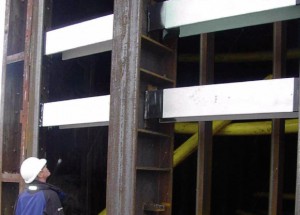 Figure 3: On inspection none of the test specimens showed any sign of damage

The explosion experiment was carried out on a number of I-section columns coated with Firetex intumescent materials in a 182m² explosion chamber. The average peak over-pressure of 1697mbar was generated with an average duration of 104msec.

There was no sign of damage to any of the specimens due to the over-pressure generated by the gas explosion.

The experiment was conducted using an explosion chamber at the Advantica, Spadeadam Test Facility. The explosion chamber shown in Figure 1, measures 4.5m x 4.5m in cross section and 9.0m in length. The chamber has a vent opening on one of the 4.5m square faces, with all other faces being confined.

Four universal columns 254 x 254 x 132kg each 1.6m in length were positioned horizontally in the vent opening frame shown in Figure 2. The four beams were coated with a 90 minute intumescent thickness.

The test was ignited by a single low energy spark positioned at the back of the chamber opposite the vent opening and behind the banks of pipes. See Figure 2, a still photograph captured from the video at the height of the blast.

Pressure transducers were used to measure the over-pressure in the test rig, and video cameras were used to provide visual records of the test.

The average over-pressure measured by the pressure transducers was 1697mbar, with an average duration of 104msec.

When inspected visually post-test there was no sign of damage to any of the specimens due to the over-pressure generated by the explosion and the coatings were intact. (See Figure 3). These tests are reported fully in Advantica Report No. 5539.

This poses the question; how would other fire protection materials perform in similar explosion conditions, and would the material retention be sufficient to offer adequate fire protection?

Following this experiment the test specimens were to further undergo hydrocarbon fire testing. 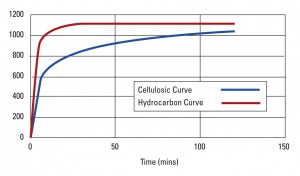 Diagram 1: Hydrocarbon fires are generally much gretaer in severity than cellulosic fires 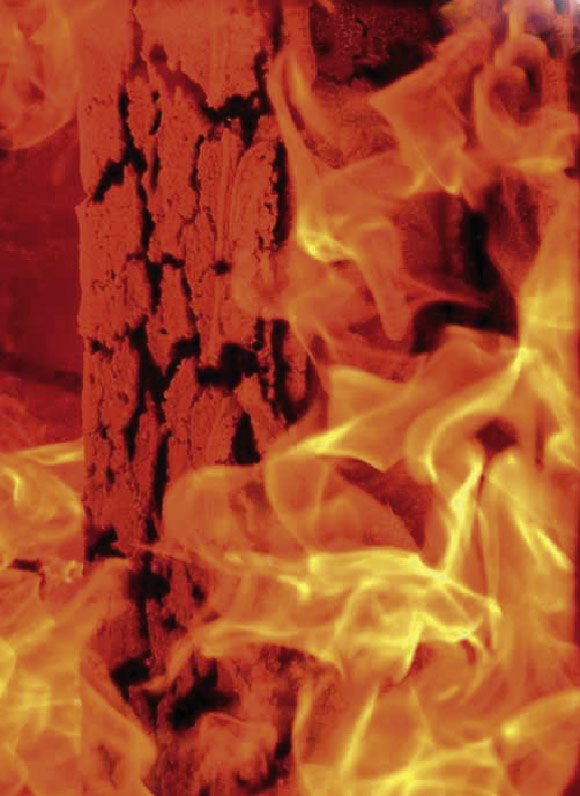 Figure 4: Firetex M78 intumescent on a steel column during a fire test 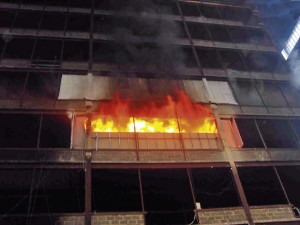 Figure 5: The fire compartment at Cardington in flames

The blast tested and control specimens were then subjected to a fire test which simulated the heating conditions specified in Appendix D of BS 476: Part 20: 1987. This appendix relates to a temperature relationship, which simulates fires burning hydrocarbon fuels.

Hydrocarbon fires are generally much greater in severity than cellulosic fires, as can be seen when comparing the standard BS 476: Part 20. (See Diagram 1)

It should be noted that the performance of these materials, which were designed for use in cellulosic fires, was excellent. On the whole in the hydrocarbon fire tests the materials achieved in the region of 60% of their expected performance in a cellulosic fire. See Figure 4 showing Firetex M78 intumescent on a steel column during a fire test.

These fire tests were witnessed by an officer of Warrington Fire Research and are reported fully in Warres Report No. C128566.

Performance of Firetex M78 in a large-scale natural fire

The figure also illustrates the severity of the fire during the post-flashover stage. The compartment floor area was 11m by 7m and the height of the compartment was approximately 4m. The time equivalence for this fire was calculated as 72 minutes. It was therefore considered appropriate to coat the steel column with a 90-minute fire protection thickness.

The results indicated that a steel member protected in a similar manner to the indicative test specimen with Firetex M78 would have maintained load-bearing capacity for the entire duration of the natural fire and for a period corresponding to an equivalent fire severity of approximately 100 minutes – see BRE Report No. 211576

In conclusion the above series of tests using more reliable and robust intumescent coatings has demonstrated that they will provide protection against explosion and hydrocarbon fire in addition to severe natural cellulosic fires.

The author hopes that this paper will go some way to provide additional confidence in expertly formulated intumescent coatings when they have been subjected to far more than statutory requirements.