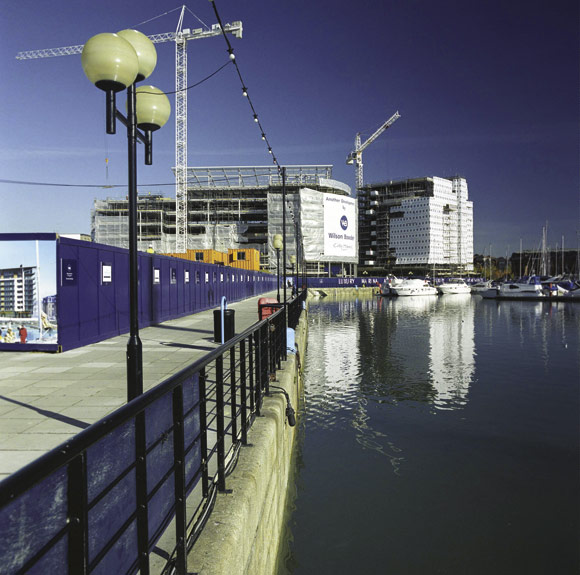 Demand for high-quality waterfront apartments shows no sign of easing, and many developers are selecting steel. David Fowler reports how the use of steel is speeding construction of a prestigious development in Southampton.

Admiral’s Quay in Southampton is one of the biggest city centre residential projects in the UK, consisting of seven blocks of five to 11 storeys overlooking the marina.

Developer Wilson Bowden City Homes changed to steel for blocks two to five after an initial block had been constructed as a flat slab concrete frame.

“Block A went well but a cost analysis caused a rethink,” says Paul McCracken, Buildings Director of structural engineer Robert West Consulting. For the next four blocks, of which all but one are now complete, Wilson Bowden went over to steel. Construction of the last two in the development has yet to begin. 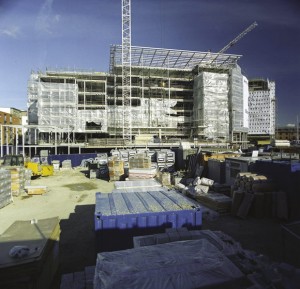 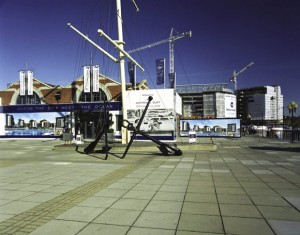 As well as apartments bars, restaurants and retail outlets form part of the project 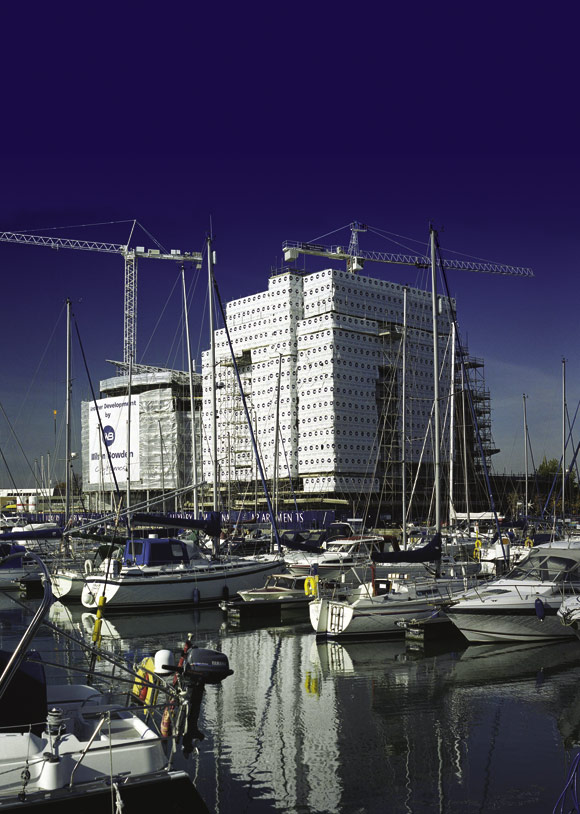 Composite construction has allowed floor spans which minimise the number of columns at ground level and made it possible to create a range of apartment layouts on the upper levels. On a typical floor, five apartments of 80m² to 140m² in area are arranged in a cluster around a central braced steel core containing lifts and stairs.

Universal column sections spanning 6m to 9m were chosen for all beams. “This minimises the depth and allows them to be contained completely within the ceiling space, giving the architect complete freedom in partition wall layout,” says Ivor Drodz, project manager for Robinson Construction. Columns are all located in separating walls between apartments.

A battened floor and suspended ceiling contribute to the acoustic insulation, which tests have shown exceeds the requirements of the Building Regulations by 10dB.

Edge beams were kept to the minimum depth to allow full-height glazing and walk-through balconies. Steel balconies were attached to stub brackets pre-welded to the edge beams.

Robert West had only undertaken one previous residential project using steel, Bellway Homes’s Neptune project in Ipswich, though Wilson Bowden had prior experience of using steel.

“To make sure it reached the acoustic requirement for a density of at least 360kg/m³ the first block has 170mm slabs. The others had 140mm slab plus 45mm of screed,” says Mr McCracken.

Where undercroft car parking is provided, the steel is fire protected up to the soffit of the first floor. Otherwise, steel members are encased in boarding or built into walls.

The change to steel meant some aspects of the design needed close scrutiny. “We had to look carefully at where we put transfer beams to bring loads down where the buildings step in on the higher floors,” says Mr McCracken. “We worked closely with the architects on where to put columns.”

Placing of columns on the ground floor also requited close co-operation to keep the number to a minimum, and in particular keep kitchen areas column-free. Using the 3D Max module of CADS, a column load take-down over eight storeys was possible in one and a half days.

The key advantage of steel was speed of construction. Mr McCracken says: “It’s fair to say it was quicker to put up: it definitely had the edge as far as the programme was concerned.”

He adds: “You can always build a steel frame quicker, but the overall advantage depends on how quickly you can get through the process with all the follow-on trades. On Admiral’s Quay this worked well.”

This was helped by the use of lightweight metal stud partitioning for internal walls, so that there were no wet trades. The prefabricated steel balconies were also quick to erect.

A decision on whether to build the remaining two blocks, B and D, in steel has not yet been taken, but the indications are good.

Overall, Mr McCracken says: “With steel, if the detailing and quality of the workmanship is good, it definitely has the edge.”