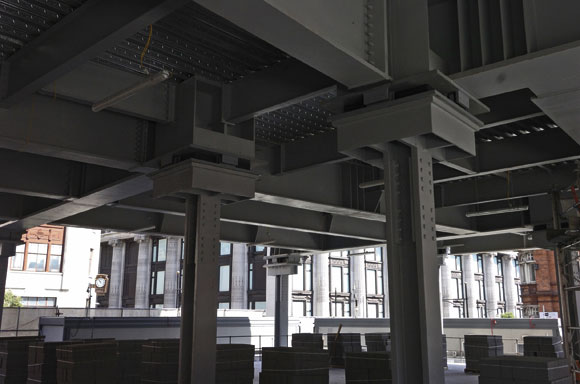 Large bearings isolate the upper levels of the building

Described as Oxford Street’s largest development in 40 years, Park House is set to transform the western end of Europe’s busiest high street. Located on the south side of this world famous shopping street and backing onto the exclusive area of Mayfair, the mixed-use development is set to be one of the most sought after commercial and residential addresses in this part of the capital.

Scheduled for completion by November 2012, Park House will consist of three levels of retail – with many of the ground floor units featuring shop fronts twice the average height for the area. Above the retail zone the building is split in two, with seven floors of office space occupying the western half of the structure and 39 apartments housed in the upper eastern portion of the building.

The development is also big, occupying an entire 150m-long city block. To the rear of the building, along North Row, there will be an entrance for the exclusive use of residents; the offices will be accessed via an entrance on the eastern elevation. 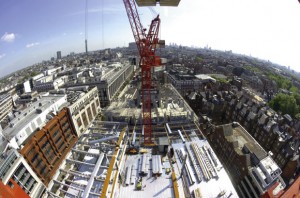 A building such as this, with multiple uses is not unique. But the relationship between the three uses (retail, commercial and residential) was certainly one of the main drivers for the project’s structural design.

“The challenge was to devise a rationale which met three different uses, and what we came up with was a hybrid design for a hybrid building,” explains Alex Hanna, AKT II Project Engineer.

For the ground and first floor retail levels, which sit atop two concrete basement levels, steel was the chosen framing material. Above the retail zone is where the structure becomes interesting, at least design wise, as here the building is split in half, with an expansion joint separating the upper commercial floors from the adjacent apartments.

The commercial portion of the building is also steel framed, meaning the western half of Park House is constructed with the same framing material from ground level up to the roof. However, the other half of the structure, housing apartments is a reinforced concrete frame.

In order to facilitate this change, not only in framing material from steel to concrete, but also the differing column lines, a large steel transfer structure has been installed to support the residential portion. A 12m x 12m grid pattern has been adopted for the shops, but this was deemed to be too large for apartments and so the grid reduces to a 4m x 8m pattern. 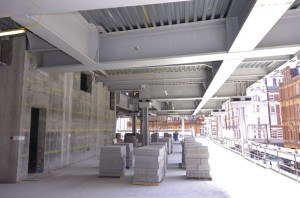 “To support the different concrete column lines above, we had to install much deeper and heavier beams for one portion of the second floor level,” explains Jim Graham, Severfield-Reeve Structures Contracts Director.

The transfer structure consists of beams weighing up to 30t and these large sections were too heavy for the on-site tower cranes, which were used for the majority of steelwork erection. Severfield had to use two 250t capacity mobile cranes to erect these pieces, with one crane positioned in North Row and the other sat on the concrete slab.

“It was vitally important that this part of the steelwork was erected as quickly as possible due to critical path activities running through the residential section of the building,” says Mace Operations Director, Dean Emblin.

The transfer structure is not the only interesting feature incorporated into the second floor steelwork. As Park House is situated directly above the Central Line underground railway, vibration could have been an issue, especially for the offices and apartments. For this reason, the entire structure upwards from second floor level has been isolated from the lower two levels of steelwork. Large 1.5m x 1.5m rubber and steel bearings have been incorporated into the main frame steelwork, and these will absorb any vibrations from the underground railway and from Oxford Street’s considerable amount of traffic. Isolating the upper floors also meant that the two main concrete cores had to be constructed on top of some similar bearings; these ones located at sub-basement level.

Another interesting steel element of the project is the shape of Park House, which completely lacks any sharp corners. Both ends of the building are rounded and curve upwards towards a sloping roof, while the two main elevations start inclining at second floor level. As well as curving in two directions, the roof also slopes down, west to east, to incorporate the higher commercial section of the building.

The commercial section of the building extends up to level nine (level eight being the last office floor and nine being a galvanised plant mezzanine floor), while the residential part of Park House is slightly lower, only extending up to level seven.

To form this complex shape, the perimeter columns, always remaining at 12m centres, are facetted at approximately 3m intervals. These column lines then carry on and over the roof to form the sleek shape of the structure, which has been described as mimicking the outline of a racing car. 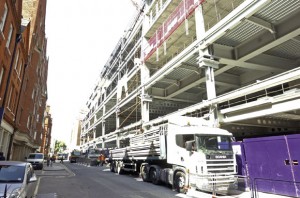 With two framing materials going up simultaneously on one project, teamwork has played an important role on this project. Once the steel transfer structure was erected on level two, concreting works for the residential portion of the building started to be constructed in tandem with the steelwork for the commercial floors.

“Teamwork between all of the on-site trades has played an integral role in this project. Steelwork and concrete tie-in together at five levels, so working together is necessary for a speedy construction programme,” explains Dean Emblin, Mace Operations Director.

As well as working in tandem with the concrete contractor for the upper levels of the building, Severfield-Reeve’s steel erection team has also maintained a quick and safe delivery of the overall steel package.

To help maintain a safe working environment for all of the follow-on trades, steelwork erection and metal decking has always maintained a two floor buffer zone. In this way the completed steelwork forms a crash deck and safety zone between the erection process and other trades.