Hold the front page for steel 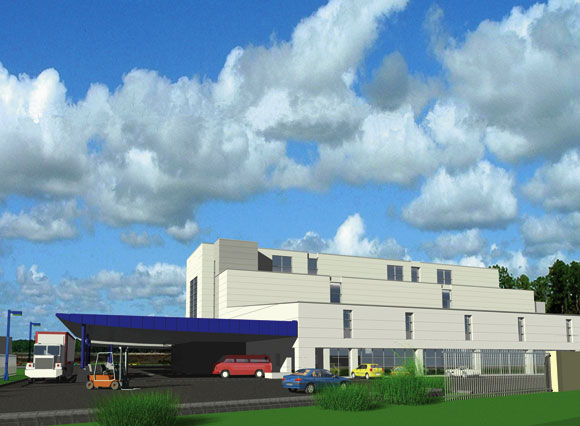 A new extension to the Johnston Press works in Portsmouth required some hefty steel bracing to support a narrow and tall structure.

What a building will eventually house often dictates how the structure is constructed and what it will look like. Add to this the available space and quite often a new structure has to be engineered to fit a number of important criteria.

An example of this is the new Johnston Press redevelopment in Hilsea, Portsmouth. This large extension, next to the existing Portsmouth News building will eventually house the latest printing press technology with a capacity to produce more than 80,000 newspapers per hour.

“The building is tall because of the need to accommodate an 18.2m high press, considerable ventilation ductwork and a maintenance crane, together with the need to house an internal erection gantry crane for lifting the presses into place. The width was dictated by the available space and the need for a further framed and trussed structure for offices, plant and a mailroom,” says Alan Rose, Partner of structural engineers McLay Collier.

The construction of the structure also had to take into account a requirement for a large truck turnaround area and storage space to the rear of the building.

Johnston Press gained planning permission for the project following an announcement in 2005 that it had secured a 15 year contract to print for News International. This workload, in addition to the numerous local newspapers the company is already producing from its premises, meant a larger press hall was required.

Work commenced on site in July 2005 with the demolition of part of the existing structure containing an old press hall and service areas. 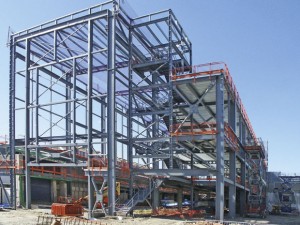 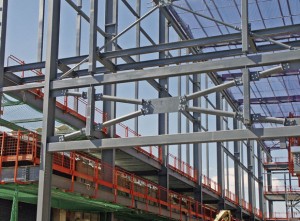 Sturdy bracing was erected at both ends of the building 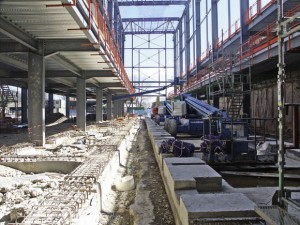 The press hall was erected around the concrete inertia block

ACL Structures completed the majority of the steelwork in an eight week programme. But the challenge, says ACL’s Site Supervisor, Jason Berry, was erecting the frame for the press hall around the concrete inertia block.

“It had recently been cast and we couldn’t run plant machinery over it, so we had to erect the majority of the steelwork with 120ft reach cherry pickers and one 35t mobile crane positioned outside of the building’s frame so it could get the required reach,” explains Mr Berry.

What also necessitated the need for the large crane was the overall height of the new structure and the fact that the site was so tight, as it sits next to an existing building.

“Ordinarily we would erect the steelwork for a job of this size from the inside,” says Mr Berry. “But for the press hall that just wasn’t possible.”

“Basically we have a large steel structure built over a concrete interior. The concrete inertia block has two rows of internal concrete columns – one either side –  but the rest of the structure is all steel. “Steel is more adaptable for the large open plan areas and the height,” explains Mr Berry.

ACL erected main spliced columns in three individual 8m sections to give the overall height. The majority of these members were 686 x 254 x 140. But a free-standing building with a length of 60m, a width of 16m and a height of 24m meant some sturdy steel bracing was needed.

Mr Rose says, normally on this type of building there are free faces into which the bracing can be inserted. However the design of the structure, with one side of the press hall immediately abutting an existing building and the majority of all other faces being required for access, meant that the bracing of this structure was particularly challenging.

“The bracing at the west end was fairly conventional, however, at the east end it had to be contorted around the stair tower and on to the relatively narrow, solid side panels,” explains Mr Rose. The bracing consists of mainly circular hollow sections up to 219mm diameter at the lower levels.

“We also had to incorporate possible future plans to extend the building, – which is easier with steel but also limited the locations where we could brace the structure,” Mr Rose adds.

As well as the main press hall, ACL Structures has also erected an adjoining lean-to building which will be used as a mailroom and distribution centre. The structure has no internal columns and consequently features a number of long 24m trusses to support the roof.

Each truss weighs 4.5t and they were brought to site fully assembled and lifted into position as complete units. They are predominantly made up of 203 x 203 x 71 columns.

The lean-to structure also contains a mezzanine office level, covering approximately a quarter of its floor area. “We had to insert some large floor beams for this level,” says Mr Berry. Some heavy equipment will also be stored on this floor so some 610 x 229 x 101 beams were erected.

Connected to the lean-to structure, ACL is also erecting a large 20m x 20m steel canopy over a truck docking area. This will consist of cold rolled purlins supported by a number of steel rafters.

Johnston Press anticipates the new presses will start rolling by the end of the year, and before then a second phase of the project will have started. The adjacent 1960s newspaper building is scheduled to be renovated and an additional steel framed mezzanine floor erected within to support new offices.