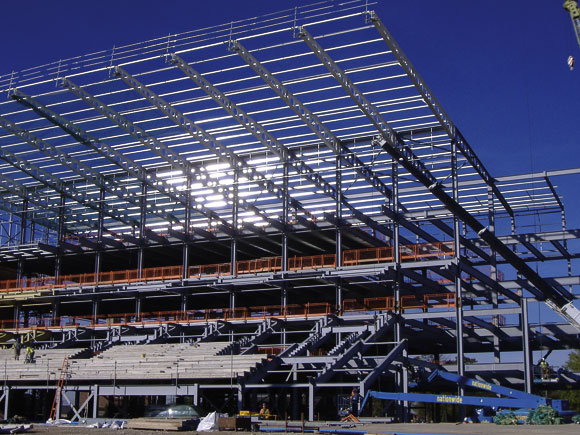 The new stand towers over the famous Town Moor track

The redevelopment of Doncaster Racecourse is set to transform the site into one of the most modern and impressive sporting venues in the UK. Martin Cooper takes his place in the press box.

The three hundred year-old Doncaster Racecourse is currently undergoing a major redevelopment. The course which hosts the oldest of the five British flat racing classics – the St Leger run annually since 1776 – will have a new grandstand, equipped with all modern facilities including an exhibition hall, up and ready for the historic meeting in September.

There is also a much bigger picture to envisage, as the Racecourse is ultimately just one piece in the overall transformation of Doncaster. In the past five years, the Borough has attracted over £750M worth of investment from both public and private sectors, which has helped boost the local economy and improve transportation links.

Other significant projects recently completed include the Frenchgate retail development in the town centre, the Sports Complex at Lakeside and a new football stadium for Doncaster Rovers.

Commenting on the Racecourse redevelopment at last November’s topping out ceremony, Mayor Martin Winter said: “When complete, the Racecourse will provide a real boost to Doncaster. Residents will see a massive change in the facilities and will be able to appreciate a day at the races at its very best. The new attraction will also provide an anchor for bringing investment into the Borough along with a whole host businesses.”

As well as the grandstand, the Racecourse works also include £1M invested in the racing surface, improving both irrigation and drainage which the owners say will ensure the best conditions for the very best thoroughbreds to run in. Meanwhile, new stables are being constructed and these will be complimented by a new horsewalk, saddling boxes, pre-parade ring and weighing room. 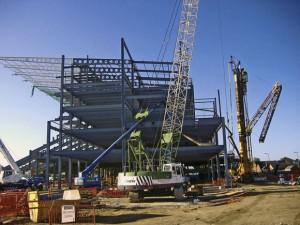 All of this work constitutes Phase One of the project, with a second phase, including a four-star hotel due to begin in 2008. The overall centrepiece of the project is the grandstand structure and its interconnected conference and exhibition hall. The new five-storey stand will feature numerous bars and restaurants and two levels of private boxes – with panoramic views stretching across the famous Town Moor track.

The state-of-the-art exhibition centre will be housed on the ground floor of the new grandstand and extend back 24m, incorporating more than 4,000m² of floor space with a number of alternative room and break-out area layouts.

The new grandstand replaces an old 1970s concrete framed structure which main contractor ISG InteriorExterior began demolishing in January 2006. In line with its sustainability charter, the majority of the concrete, including foundations, were recycled and incorporated in the new scheme. Demolition was completed in June and then steelwork erection was able to commence in late August.

At first the idea was to refurbish the existing stand, but once substantial amounts of asbestos was found, it was more cost effective to demolish the structure and build a new one.

“The decision was then taken to construct the new Grandstand with steel as the programme was very tight,” says Tim Royle, Director of TRP Consulting. “Steel also lends itself to the large spans required in the exhibition area as well as the deep cantilever roof.”

Mike Rowe, Contracts Director for Billington Structures comments: “By early January we’d completed most of the steelwork, with the exception of a small section of the main entrance canopy. This was the last piece to assemble and lift into place.”

For the main grandstand Billington erected approximately 1,500t of structural steelwork with the construction predominantly consisting of column and beams supporting metal decked floors and pre-cast concrete slabs for the terracing.

“We had to erect and programme our work around the pre-cast deliveries,” comments Mr Rowe. “There was so much of the material used it dictated our schedule somewhat.”

Even with this slight inconvenience, Mr Rowe is quick to point out that Billington was however, always ahead of its contractual programme. All exposed steelwork used on the project was also pre-painted and this contributed to speeding up the overall construction process.

The stand is an imposing structure at 90m-long, with a maximum height of 28m and topped with a 18m cantilever roof.

A whole array of different size beams were used for the terracing areas. Mr Rowe points out that most of the grid sections have a unique make-up as there are numerous exits and wheelchair access points. 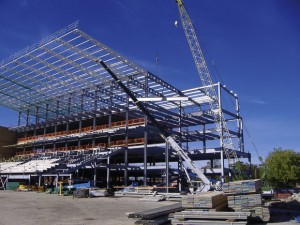 The main structural steelwork was erected in 10m x 10m grids, which was also replicated on the roof assembly. The main columns, which are centred at 10m intervals and support the roof, are predominantly 356 x 406 x 235 UC’s. These 14m long members were spliced at the building’s second level to give the overall height of 28m.

The cantilevered roof is constructed with a number of tapered 18m-long Westok 838mm x 194mm beams which are 30m long overall, having a 18m cantilever section, which were chosen for the durability and lightness.

A grid spacing of 10m x 10m or 10m x 15m was adopted for the main stand to suit the large open plan dining and bar facilities which occur at each level. This was again a key factor in the decision to adopt a steel frame.

The 10m bay spacing couldn’t work for the terracing, comments Mr Royle, due to issues of crowd induced vibration and the associated natural frequency limits. This combined with the complexity of the terrace profile with alternating banks of seating and standing area led to a reduction in the bay spacing for the terrace structure to 5m.

Adjoining the back of the Grandstand – and incorporating the ground level of the stand – is the 70m-long exhibition centre which has no internal columns and has clear spans of 20m.

The construction and planning has all gone to plan, however running directly below the Grandstand at a depth of 6m is a main sewer which initially caused some structural headaches. Mr Royle says the answer was to insert a series of 10m long beams to transfer the load over the brick sewer and then lay the ground floor concrete slab on top of this structure.

Doncaster Racecourse is due to re-open for business on 17 August, followed by a Grand Opening Ceremony on the first day of the Ladbrokes St Leger meeting in September. The new Grandstand is set to become a landmark structure for all race-goers.