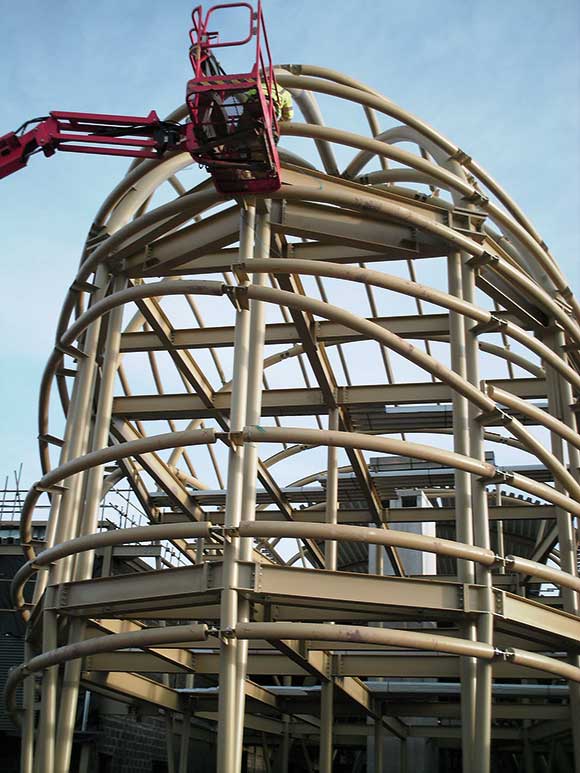 The final steel members are erected on the handle’s nose.

The door handle of a famous car marque was the inspiration behind the design of a new academy in Liverpool. Martin Cooper reports.

World famous it may be, but the Jaguar car isn’t necessarily associated with Liverpool even though they roll off the production line at Halewood on Merseyside. But that’s all about to change, thanks to a new school which has borrowed some of its design from a car – a Jaguar door handle to be precise. 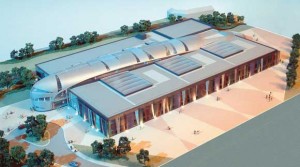 The inspiration for the design was a Jaguar car door handle.

The North LIverpool Academy, being built on former playing fields and within earshot of both of the city’s football grounds – Anfield and Goodison Park – is predominantly a simple beam and column build. But what stands out is a central steel structure shaped liked a car door handle which is sandwiched between the academy’s two teaching blocks.

Dubbed the ‘handle’ the structure is not symmetrical about the short axis as the ridge
along the length of the handle and at both the head and tail vary to create the desired shape. At three storeys high, it will stand a floor above the rest
of the building. It is 140m long x 15.6m wide and requires 350t of structural steelwork.

Because of the complexity of the handle’s shape, the steel erection part of the construction programme has been sequenced around its design. “Ordinarily the project would have been built north to south with the two teaching blocks and the central handle constructed as one. However, the design work needed for the handle was so involved that the two outer blocks were erected first, while the handle’s design was still being finalised,” explains Tony Foster, Wates Project Manager.

Fabrication drawings were made for each piece of steel. The sections of steel were welded then delivered to site in the order they would be needed. The connections were a challenge and it took time to analyse the loads which passed through the structure to make sure they were the right strength.

“The forces passing through the handle structure are hugely complex,” says Paul Hayes, Project Manager for steelwork contractor Billington Structures. “Our design team were working on the model for more than six months.” 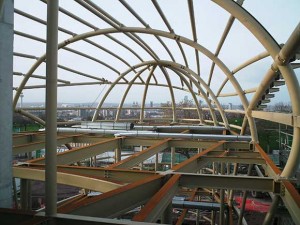 Steel ribs form the arc of the handle’s shape.

“The outer two teaching blocks are standard build,” adds Nick Garcea, Atkins Project Engineer. “However, the challenge in designing the handle was the fact that it’s curved and also skewed by three degrees on plan, which means every connection is different.”

The two storey outer teaching blocks were erected around a 7m grid pattern and will predominantly house classrooms. However, the eastern block also contains a sports hall which has column free spans of up to 23m and required a series of 1.25m deep trusses.

“Once the teaching blocks were erected we began erecting the handle from its tail, and then worked through to the head using a 60t capacity crane.”

Primary bowstring trusses at 12m centres – all of differing length and depth – supported on oval  sections form the handle. Above this, steel ribs at roof level then form the distinctive rounded shape. There are cruciform connections at quarter points, and adding to the complexity, all CHS sections are unique because of the structure’s changing shape.

“The connections are all bespoke and they will remain exposed for architectural and aesthetic reasons, so we had to cover them with steel plates,” adds Mr Hayes. 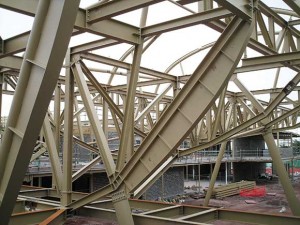 A series of bowstring trusses support the handle.

As well as the complicated design and fabrication work undertaken by Billington, the company also had to make sure all steel members arrived on site in the order they were needed.

“This wasn’t so much of a priority with the teaching blocks,” says Mr Hayes. “But because all the steel members for the handle are unique we had to make sure they arrived on site as needed.”

The sequencing for steelwork deliveries also included the bowstring trusses as they vary in size, although they are typically around 14m long. The trusses are positioned on first floor level and span in two directions. As well as supporting the rib steelwork the trusses also allow the ground floor area of the handle to be an open area which will be the academy’s canteen.

The steel ribs are in a sequence of perpendicular tangential arcs which give a smooth shape and help make the handle erectable.

One of the most technically challenging parts of the project was getting the curves of the handle’s head and tail sections as smooth as possible. Because of the shape a lot of thought went into what materials could be used for cladding.

To prevent faceting three layers of single plywood membrane have been applied to the head and tail sections of the handle and finished with
a plastic silver grey membrane coating. The main body of the handle only requires two layers of ply to get the curve correct.

Curved tubular purlins and sheeting rails will also help give the external shape to the head and tail sections.

The majority of the of the roof will be constructed using 200mm metal decking fixed to the steel ribs. To get the smooth continuous surface for the roof, welded steel plates have been added to the top of the CHS supports. On the head of the handle, 48mm decking sheets have been installed to get the required tighter curves.

As to the question why the handle shape was chosen, the construction team are adamant it will be inspirational to the future students, although at first there was some local opposition.