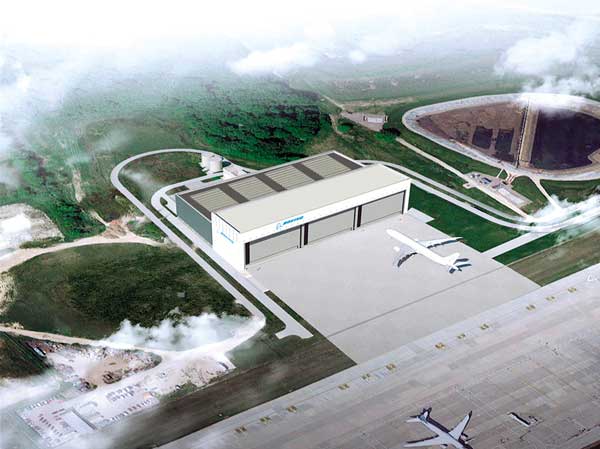 Aircraft manufacturer Boeing’s proposed plan with Gatwick Airport to build a new 180m-span aircraft hangar has been granted permission to go ahead by Crawley Borough Council, with full works scheduled to commence later this year.

The steel-framed facility will be fully operational in early 2019 and will add on-site engineering and maintenance capability for operators of Boeing aircraft at Gatwick, including short haul 737 aircraft and Gatwick’s growing long haul fleet of 747, 777, and 787 Dreamliner aircraft.

Gatwick Airport said its route network is growing fast, and the airport is in the Premier League of European Airports that serve more than 60 long-haul destinations.

With new services on Boeing aircraft to Denver, Seattle, Austin, Chicago and Singapore recently commenced or announced, this new hangar will play an important role in supporting Gatwick’s long-haul network as it continues to grow.
The new hangar facility will support the Gatwick airline community’s immediate operational needs which, in turn, will help the airport to continue its record growth in both short and long-haul services.

The new multi-million pound hangar facility, which will be located in the north west zone of the airport, is expected to support more than 200 jobs at Boeing and its suppliers in the region surrounding the airport.