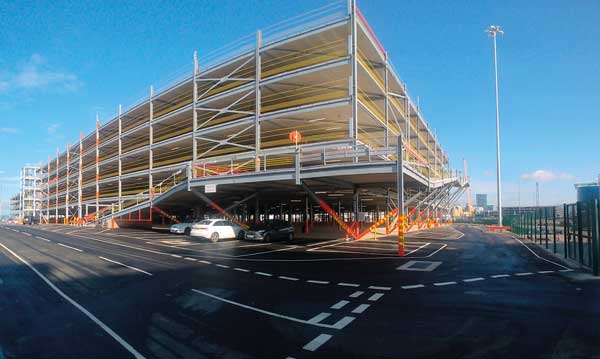 A new vehicle export terminal, which is part of a £50M investment by Associated British Ports (ABP) in The Port of Southampton, has been officially opened following the completion of a major expansion project.

The Pacific Terminal is the sixth multi-deck facility at the Port, and is one of two new car storage facilities recently completed by Morgan Sindall.

The project was handed over three weeks ahead of schedule, while a seventh multi-deck storage facility, as yet un-named, was completed four weeks early with just seven weeks between each completion date. The projects were executed simultaneously and have a combined value of £24.5M.

James Killelea was the steelwork contractor for both of the car storage facilities and erected a total of 2,800t of steel.

The facilities have created almost 10,000 additional spaces, ensuring that The Port of Southampton is the UK hub for automotive shipping by enabling leading British car manufacturers like Jaguar Land Rover to reach global marketplaces.

ABP is a major employer within Southampton docks, already the busiest port in the UK with almost one million vehicles passing through the port in 2017, an increase of almost 10% from 2016.

Morgan Sindall’s Managing Director for the South, Andy Duff, said: “The Port of Southampton is a key UK asset and we’re proud to have formed such a successful relationship with ABP to deliver this strategic new terminal, building on its capability as a world-leading import and export hub.

“Working collaboratively with ABP and major car transporters at the dock, our team delivered on budget and ahead of schedule. This was a fitting way to end these key projects, the fourth and fifth schemes we have successfully delivered for ABP.”