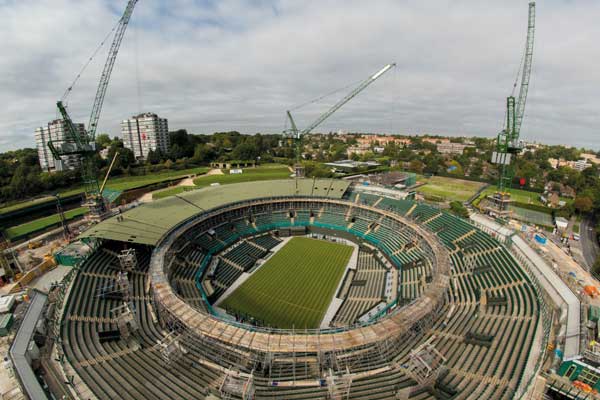 Work is under way on the £70M contract to redevelop No.1 Court at Wimbledon.

The project will include new, wider seating at the court as well as two additional tiers with approximately 900 seats, and the creation of a two-level plaza in place of Court 19.

When fully completed in 2019 a new retractable roof, like the existing one at Centre Court, will allow guaranteed play irrespective of the weather.

Around 220 electro-mechanical devices (including motors), along with a control system capable of working to accuracies of a fraction of a millimetre, are needed to ensure the roof operates smoothly and quietly.

The roof is divided into two sections with a total of 10 bays. Each of the bays is clamped on either side by prismatic steel trusses. The ends of each truss are supported on a wheeled bogie that moves along rails that are fixed to the new superstructure of No.1 Court.