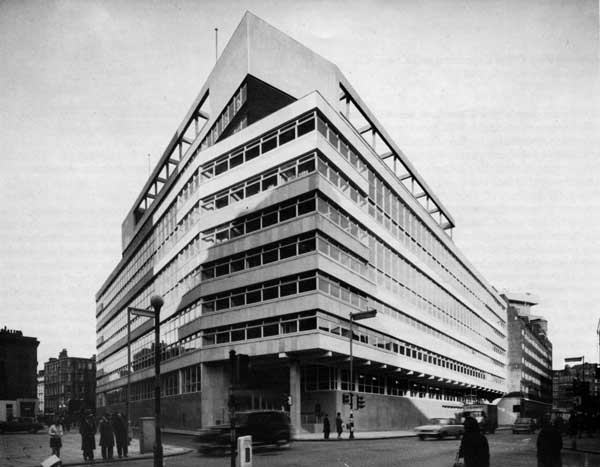 The West Central District and Eastern District Offices are large multi-storey projects for the mechanised handling and sorting of general letter and parcel mail. These offices require large basic grids and have storey heights much greater than normal offices. Likewise, there are the same requirements for future adaptability and modification.

Mainly because of an insufficiency of repetition and irregular plan configuration, lightweight aggregate precast concrete floor panels have not been used on these projects. Instead both have the major basic skeleton in steelwork, with secondary beams and floor slab in in situ reinforced concrete, the two elements acting compositely.

This produces a waffle like grid which means that the slabs and their supporting beams span in both directions. Hence, the floor slabs are relatively thin, and because of the two-way span system can tolerate quite large holes being cut through in the future. The two-way system reduces overall floor and beam depth. The use of steel for the main skeleton minimises the overall dimensions of the main stanchions, and reduces dead loads.

It is of interest to note that at W.C. District Office (pictured) two lines of stanchions were eliminated between ground and first floor to provide clear areas for vehicles between the loading platforms. This was achieved by the introduction of twin welded plate girders in B.S. 968 steel spanning 65 ft, each pair supporting an upper stanchion at mid span carrying approximately 850 tons.

The senior architect for these two projects was E.T. Sargeant, ARIBA, AMPTI, and the Senior Structural Engineer was R. C. Westbrook, MIStructE.

Reprinted for BUILDING WITH STEEL, June 1968
To read about the W.C. District Office’s latest incarnation, see ‘In the post’, NSC March 2018