The fifth office block in the prestigious Chiswick Park development in west London has recently been opened by developer Stanhope.

Steve Roberts, Arup’s Project Designer said the steel frame is so large that its basically a major structure in its right. 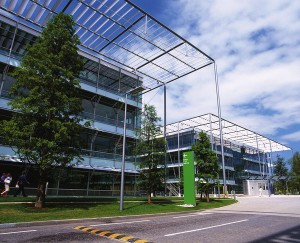 “The lightweight nature of steel meant there was no other material for such as structure,” Mr Roberts said. “And architecturally, steel also makes that supporting frame look elegant as well as being cost effective.”

Featuring 20 slender 18m-high steel columns, the supporting frame is tied into the main building at roof level. Extending out from the building the external frame is topped with a number of aluminium louvres (sunshades) which will keep out excessive sunlight.

The frame also supports external steel staircases which cascade down the sides of the facades.

Custom Metal Fabrications (CMF) supplied 240t of steelwork for the project. David Gibbs of CMF said: “The steelwork is all architectural and the columns have pin connections at top and bottom. The canopy itself is constructed with primary beams connected by tension rods which support the sunshades.”