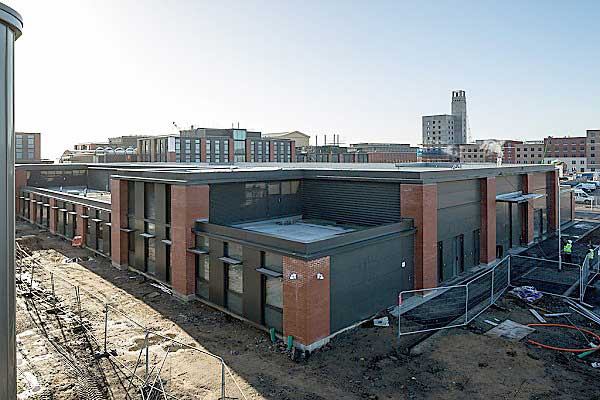 The steel-framed Institute of Structural Materials (ISM) is the first building to be completed and handed over by developer St Modwen on Swansea University’s Bay Campus project.

The ISM building is a 72m long × 26m wide portal frame with a 10m wide lean-to structure positioned along either side.

It will provide a large testing facility for existing materials that are used in the aerospace and aero engine industries. The structure will also house a data centre for the new Bay Campus.

Steelwork contractor Caunton Engineering has erected a total of five buildings for the project consisting of the £32M Manufacturing facility, the School of Management, the Great Hall, a Library, as well as ISM (see NSC Jan/Feb 2014).

The largest of the buildings and the first to be erected is the 95m long × 87m wide Manufacturing facility. This three-storey structure is divided in half by a 9.5m wide street, which will be glazed at either end and spanned by a tensile fabric roof.

A further two steel framed buildings for the overall scheme have been constructed by Leadbitter.

The entire Bay Campus scheme is on schedule for the intake of students in September 2015.