Beams with web openings can include cellular beams fabricated from rolled sections or plate girders with circular or rectangular openings cut in the webs. Typical long span floor beams of this nature are designed to act compositely with the floor slab, as shown in Figure 1, greatly increasing their load carrying capabilities. 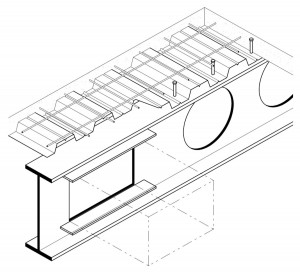 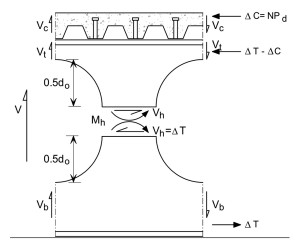 Figure 2: Typical model of the forces and moments acting on the web post 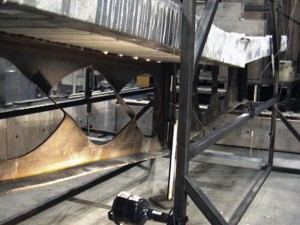 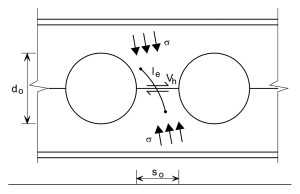 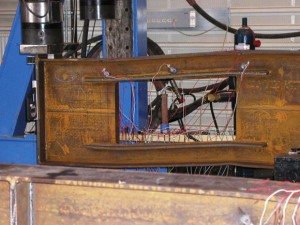 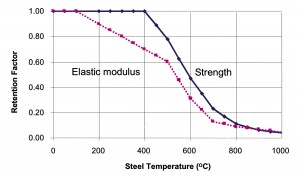 Figure 6: Relative values of material properties of steel with temperature

The use of asymmetric sections is also common, as this allows the weight of the beam to  be reduced by removing steel from the top of the section where it is less effective.

The structural behaviour of beams with web openings is relatively complex and involves five main failure modes which are included in the design model for ULS design at room temperature and in fire conditions. The modes of failure are described briefly below, for a fuller explanation of the structural behaviour reference may be made to Lawson et al(1) or P068(2).

The global bending capacity of the beam is calculation at the centre of each opening and is based on a reduced cross sectional area. A composite beam with large openings tends to resist bending predominantly by tension in the bottom tee and compression in the concrete. The global bending capacity and the vertical shear capacity are rarely the critical modes of failure in cellular beams. In bending the utilisation of the bottom flange of the section will depend on the ability of the web posts to transfer horizontal shear. In  beams with closely spaced openings the web post will often govern the load carrying capacity.

The shear resistance of a cellular beam takes account of the contribution of the web and flange for rolled sections and the concrete slab. The precise distribution of shear between the top and bottom tees is determined from the analysis procedure and must be compatible with the vierendeel bending capacity of the tees.

The model shown in Figure 2 shows the forces and moments acting on the web post  between adjacent openings. Horizontal shear forces are developed in the web post in order to transfer the incremental tension force to the bottom tee. Web posts in  asymmetric beams will also be subject to in-plane moments in order to maintain equilibrium  between the top and bottom tees.

Due to the shear forces transferred across the web posts between openings failure can  occur due to out of plane buckling, as illustrated by Figure 3. The tendency for the web post to buckle will depend on the width of the web post the height of the opening and the d/t ratio of the web.

The web post buckling model currently preferred is based on the concept of an equivalent strut, as shown in Figure 4. This model has been calibrated against test results and finite element analysis for cold and fire design.

Vierendeel bending occurs due to the transfer of shear forces across an opening, which results in the development of local moments in the top and bottom tees. The bending resistance of the top tee can be based on the composite cross section where appropriate. When calculating these local bending resistances the moment capacity will be reduced to account for the presents of axial forces and shear due to global bending behaviour. Figure 5 shows vierendeel bending of a stiffened rectangular opening.

For the fire limit state, the structural model must assume a temperature distribution on the beam cross section in order for the capacity of the section to be calculated. From observations of previous fire tests on beams, the non-perforated web will generally be at a higher temperature relative to the flanges, due to the difference in thickness between these elements. 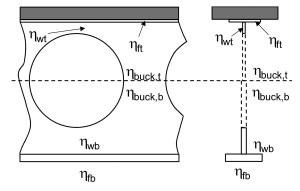 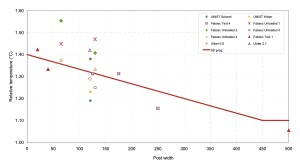 However, the web posts between openings have been observed to experience a further increase in temperature relative to a non-perforated web, which accentuates the effect of the change of material properties with temperature.

Figure 7 shows the temperatures that must be determined for a cellular beam in order to allow the structural model to be applied to the fire design case. These temperatures are normally taken as relative values with respect to the bottom flange temperature, which is used as a reference point.

The temperature of the web post has been found to be dependant on the width of the web post and also the fire protection material used to protect the beam. Figure 8 shows the  relationship between web post temperature and bottom flange temperature for a number of test specimens covering a range of web post widths and coating types. From these test results the generic relationship used in the RT1085(3) structural model has been derived and is shown as the solid line in Figure 8.

A similar relationship to that shown in Figure 8 has been observed for sprayed  cementatious fire protection materials(4). At present no data is available for board  protection systems.

As the mode of failure of cellular beams in fire conditions can change to web post buckling due to the combined effect of changing material properties and non-uniform  temperatures, the limiting temperature of this type of section will depend on the performance of the fire protection material used to protect it. Some fire protection materials perform better than others in terms of their ability to limit the increase in web post temperature.

The purpose of the testing protocol is to determine suitable thermal data to enable a product specific version of the web post bottom flange temperature relationship to be  determined. This can then be used as part of a structural analysis in order to determine appropriate limiting temperatures for design purposes. 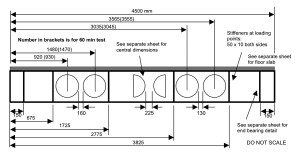 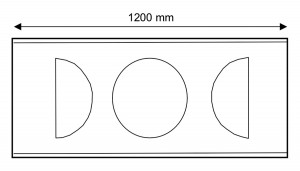 Figure 10: Indicative specimens for the determination of thermal distributions 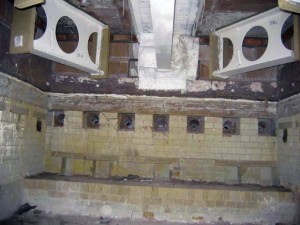 The process requires that a conventional ‘plain beam’ assessment is available, for each product which is to be tested and evaluated for use on cellar beams. The ‘plain beam’ assessments provide a baseline dry film thickness onto which an appropriate enhancement for cellular beams is added, based on the limiting temperatures determined from structural analysis. For each fire resistance period covered, a multi-temperature analysis based on the ‘plain beam’ data must also be available for the intumescent coating system being evaluated.

The fire testing programme for cellular beams needs to consider a range of section geometries. Each fire test is carried out using five sections each fitted with thermocouples to measure temperature data. The specimens tested and the location of the instrumentation is standardized as part of the protocol.

The basic section types are shown in Figure 9 and Figure 10. One loaded section is included in each test in order to permit the fire protection material to be evaluated over the range of deflections typically  experienced by this type of section. The loaded section is fabricated from plate, and acts compositely with a slab cast on Z28 Holorib steel decking. The shear connection between the beam and the slab is achieved by two studs per trough, through deck welded to the top flange of the beam. The 120mm slab is constructed using C30 concrete and is reinforced with A142 mesh.

To gather the necessary thermal data four unloaded 1200mm sections are also included in the furnace, which enables a range of web post widths and section factors to be evaluated. These sections are fabricated from rolled sections or plates and contain two half openings and one full opening, as shown in Figure 10. The geometries of the sections used varies depending on the period of fire resistance to be evaluated. Standard sections are defined  for 60, 90 and 120 minutes fire resistance. Figure 11 shows two of these indicative specimens located in the furnace, on either side of the loaded beam.

Full details of the testing protocol are given in the fourth edition of ‘Fire protection for structural steel in buildings’(5).

Generic design guide for composite cellular beams with circular openings exists in the public domain in the form of SCI report RT1085. The limiting temperature data given in  this report, tabulated for a range of beam geometries, takes account of the temperature distribution in the cellular cross section and the web post instability effects. This report covers the design of beams with circular web openings but does not currently cover fabricated plate girders with rectangular openings. Intumescent manufacturers have also tested to the ASFP protocol and obtained a product specific version of RT1085, which contains more favourable limiting temperatures based on the actual performance of their particular intumescent coating.