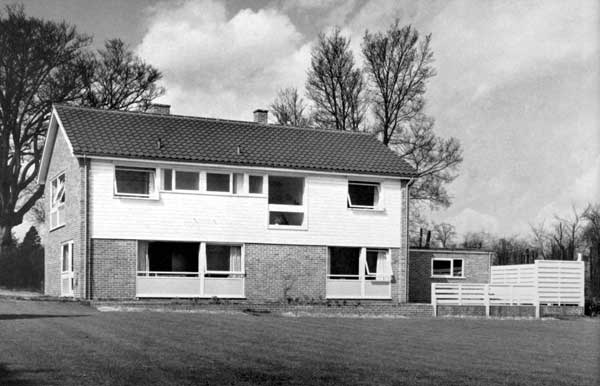 One of the most important social problems facing this country at the present time is the acute shortage of living accommodation. The problem is so urgent and vital that its solution has become one of the major political issues of the day. The Government target for domestic dwellings – both houses and flats – is 400,000 per annum, and it is estimated that 25% of the approvals given so far for public projects (Local Authorities, New Town Development Corporations etc.) are for dwellings to be built by industrialised methods.

To meet the above target a 55% increase in total output by the construction industry over the next ten years is necessary and this will have to be achieved with an increased labour force estimated at only 2%. It is to make this project really possible that greater use of industrialised building techniques is being encouraged. Many of these systems for single and two-storey houses incorporate the use of steel frame construction 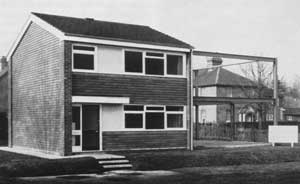 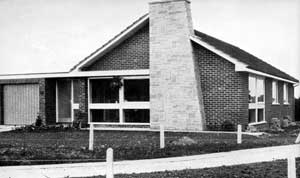 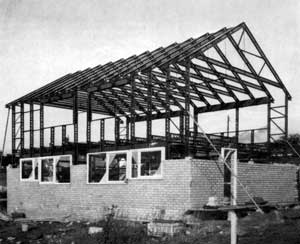 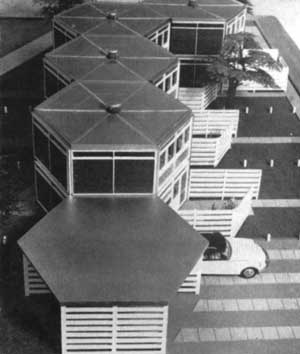 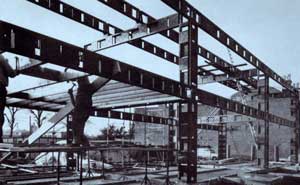 Flexibility in Construction and Design
The flexibility in this type of ‘system’ building makes possible, within certain minor structural limitations, alterations of the basic design both external and internal before and after erection. For example, it is a simple matter for the architect to alter the layout of the rooms, the position of the staircases or the design of the roof to meet individual requirements.

To make industrialised building an economic proposition houses must be ordered in quantities sufficiently large to warrant the expense of installing plant and equipment for producing the various standard units on a ‘mass production’ basis. To bring this about Local authorities are being encouraged by the Ministry of Housing and Local Government to form development groups so that large single contracts can be placed on behalf of the Group instead of a series of small orders by individual Authorities, perhaps placed at different times.

The 5M Flexible House
The basic principles of this type of house are to be found in practically all industrialised systems used today: the name ‘5M’ indicates a system  based on a planning grid of 1 ft. 8 in., i.e. five times the module of 4 in. The system is not based on type plans but on a series of standard components which, as mentioned earlier, can be used by architects to produce house plans of practically any design.

A timber and steel composite frame is erected on a lightly reinforced site slab without normal strip foundations. The frame allows roofing and walling to follow quickly after erection, creating covered workshop conditions on site at an early stage for the following trades. The frame also acts as a jig for the placing of other components. Wind forces are transferred to ground through floor and roof diaphragms and thence through the portal connection of the perimeter beams and through diagonal braces in the party walls to stanchions. The choice of cladding is wide and may be timber, clay, concrete tiles, panels and other materials.

The most significant innovation is the change in the construction of the party walls which are, in effect, movable partitions to incorporate wardrobes and storage shelves and with a high quality finish.

Steel-framed Houses
5M was the prototype design but in many later systems frames are now all steel. The factory-made frames require no special skill to erect and the structure is dimensionally accurate.

Stress calculations can be made with accuracy and the greater strength of steel work has a number of advantages, an important one being its ability to withstand unequal ground subsidence. Reduced fire hazard, freedom from distortion with age and freedom from insect and fungoid attack are other features.

In some cases the frames are supplied to site as completely rigid bolted or welded structures, though the normal practice is to deliver as separate components to be assembled on site: these are suitably marked to withstand unequal ground subsidence. Reduced fire hazard, freedom from distortion with age and freedom from insect and fungoid attack are other features.

In some cases the frames are supplied to site as completely rigid bolted or welded structures, though the normal practice is to deliver as separate components to be assembled on site: these are suitable marked to facilitate quick erection by unskilled labour. This makes unnecessary the need for heavier cranes as two men can normally handle all items without difficulty.

Columns and girders vary somewhat from company to company and in some cases are of patented design. Considerable use is being made of square, rectangular and circular hollow steel sections in the construction of frames and for columns, floor beams, rafters, bracings and certain architectural details.

In general the external walls are made up of panels of standard sizes, in many cases steel framed. However, as will be evident from the accompanying illustrations, many types of cladding are available. The modular sized windows are normally available in a variety of designs, a feature which permits variation of the external appearance. Some systems offer a choice of roof styles and other features giving individuality to the houses and avoiding the ‘factory made’ look.

As a rule the steelwork is supplied to the site suitable treated against corrosion. For instance, in one system the parts are first degreased and then immersed on a red oxide/zinc chromate paint and stoved. A second similar treatment is given after fabrication into major components. The amount of steelwork naturally varies with the design of the system but figures ranging up to two tons per house are typical.

Erection times vary according to the size and design of the house but as a guide it may be mentioned that one firm claims that the complete structural cladding assembly for one pair of their semi detached houses can be erected and temporarily waterproofed in 10 hours and completed in 21 days at the most. Another states that in 14 days six men can put up a pair of their semi-detached houses ready for occupation. A third firm claims that, on prepared foundations, the frame, walls and roof can be erected in one day by a team of six men and that the total construction time per house can be as little as two weeks. Prices compare advantageously with the more orthodox type of dwelling.

To meet the rapidly increasing demand for industrialised buildings a number of firms have laid down production lines which in some cases are comparable in efficiency with those of the automobile industry. One organisation in the north of England already has three such lines capable of producing a total of 1,000 steel-framed dwellings a year and by the end of the year will have in operation a new factory with an annual output of 6,000 of their ‘system’ buildings as well as large quantities of components for the building industry in general.

For general utility value and to supply a gaping need this type of dwelling will be in great demand. Constant care must be applied to ensure that good design is always in step with and even ahead of utility.