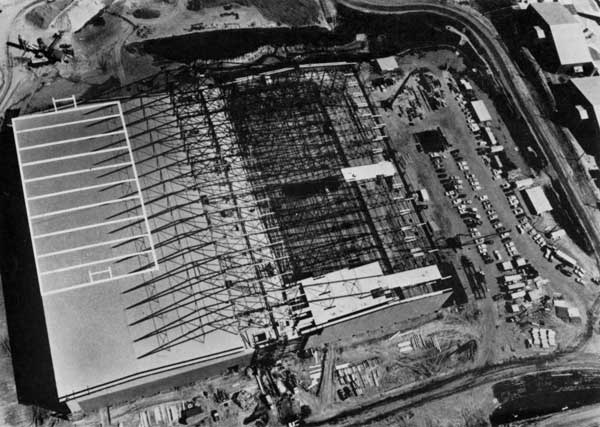 The Lockheed company has such a problem with the housing of its latest transport aeroplane, the largest transport yet built: one should say ‘had’ the problem because it has been solved by an ingenious patented gigantic steel framed double cantilever hangar large enough to house simultaneously four aircraft each of which is 246 ft long, 65 ft high and measures 223 ft wing tip to wing tip: and yet show savings in cost!

The design of the hangar envisages two back-to-back cantilevered canopies, one for static and fatigue ground testing, the other to house aircraft undergoing actual flight tests. The two areas are completely column-free and provide a clear span height of 78 ft throughout. Offices, laboratories and workshops are contained in the central core of the hangar occupying five storeys and a total area of 240,000 sq ft. This central core is the supporting structure for the two massive cantilevered roofs: one roof extends 261 ft, the other 271 ft. 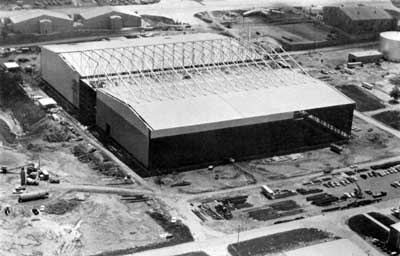 Two exposed main tension and compression members – 24-in wide flange beams with 19-in channel caps – extend down at an angle from the top of the columns and connect to the trusses forming a triangular structural system.

The object of the superstructure – in addition to holding the cantilevered trusses in shape – is to provide resistance against uplift in abnormal wind conditions. This means that the ends of the trusses will move up and down a few inches and no more, under maximum wind or live load conditions.

It is estimated by the designers that the advantage in saving of steel with this hangar over a conventional cantilever design, lacking the superstructure, can be as high as 32 per cent with a maximum saving in cost of 24 per cent – very substantial indeed.

The designers draw special attention to the fact that each cantilever canopy supports a full coverage, bridge crane system of 10 ton capacity.

The hangar illustrated in the article is equipped with enormous structural steel sliding doors on each end of the two 480 ft hangar ends: these doors are 70 ft high and 80 ft wide but it is emphasised that experiments are now being carried out with doors of up to 100 ft clear height.

Five thousand tons of steel are being used in this structure which becomes fully operational this month (February 1968).
Complete dimensions of the hangar – 630 ft by 480 ft with a height of 142 ft.