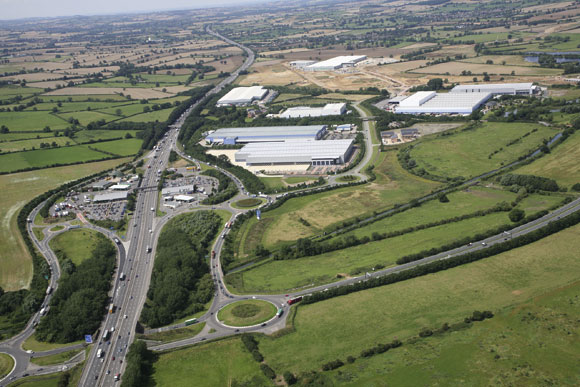 Steelwork has recently been completed on what is described as the most environmentally-friendly distribution centre in Europe.

Atlas Ward Structures has completed the steelwork for the flagship warehouse at the ProLogis Park in Pineham, Northamptonshire. The structure, which will use a number of advanced features designed to reduce energy consumption and carbon emissions, is said to be one of the most environmentally-friendly warehouses ever built.

The installed energy saving features include wall-mounted photovoltaic panels that generate electricity, a solar wall product that produces energy from daylight, a power plant that re-uses the heat produced by air-conditioning and an on-site recycling facility.

Also included are energy efficient lights and a system which will harvest rainwater for internal processes as well as distributing it to an adjacent ecological corridor for native plants and animals.

The energy savings, combined with ProLogis’ investment in an accredited carbon credit system, will mean the distribution centre will operate with a negative carbon footprint.

Ken Hall, Managing Director of Global Construction for ProLogis in Europe, says: “When completed, the building will be amongst the most environmentally advanced distribution facilities in the World.”

The building has been pre-let to major supermarket chain Sainsbury’s and forms a major element of a scheme which will eventually provide more than 1,500 jobs.

“We’re pleased to be partnering with Sainsbury’s on this development which will deliver significant efficiencies and long lasting environmental benefits,” adds Mr Hall.

The state-of-the-art building has a footprint in excess of 57,000m² and required Atlas Ward to design, fabricate and erect 2,190t of structural steelwork.

With so many high-tech features to be installed, it was imperative to get the building’s frame up and ready as quick as possible.

The structure is a portal frame, four spans wide and 44 x 8m-wide bays long. Bill Armstrong, Project Manager for Atlas Ward, says the building was fairly straightforward to put up with erection going quickly and smoothly in an alloted eight week programme.

The distribution centre has two attached office blocks along one facade, one with three storeys and the other a single floor structure. “We installed external feature columns for the larger office building,” comments Mr Armstrong. “Along with brise soleil support steelwork.”

Commenting on the need for a quick steelwork turn-around, Rob Miller, Buckingham Contracts Director, says: “It has been a particularly tight programme and Atlas Ward were able to commence erection eight weeks after the award of the contract and complete some eight weeks later. This was vital to enable the follow on trades to progress.”

Nigel Pickard, Atlas Ward Managing Director summed up: “We are delighted to have been in-volved with Buckingham, ProLogis and Sainsbury’s on this flagship project. The Severfield-Rowen Group places the sustainability and carbon reduc-tion issue high on the PLC agenda for 2007 and in the future.”

The warehouse has been pre-let to supermarket chain Sainsbury’s