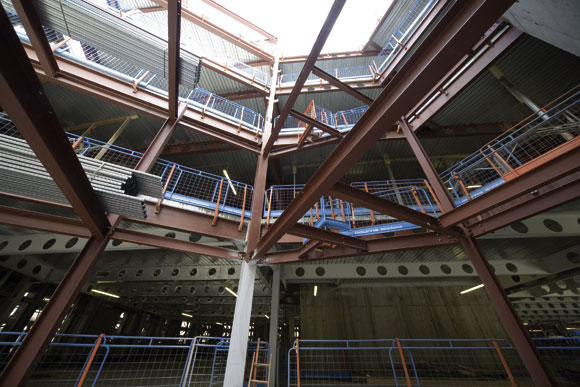 A new steel framed commercial and residential project in a London conservation area required some intricate designing, around a retained façade, to allow it to complement its surroundings.

The number of inner city projects requiring contractors to retain old facades, while constructing a new and often larger premises inside is gathering pace. Conservation areas have proliferated in recent times and councils and city authorities are loathe to tear down old buildings without giving some thought to what could be preserved.

Central London has seen more than its fair share of these projects and one of the latest examples is the new £23M mixed use development that sits on a site bounded on two sides by Chancery Lane and High Holborn.

Prior to construction a number of structures of varying ages needed to be demolished, leaving a retained 19th Century facade along most of the High Holborn and Chancery Lane frontages.

The new steel-framed building stands on a raft foundation with three concrete cores providing stability. Main contractor Skanska, says close attention has been paid to the Chancery Lane conservation area, in which the development resides, and the building will provide a traditional exterior, complementing its surroundings.

“The facade was load-bearing masonry, but the retained feature will only support its own weight,” explains Mike Roberts, Project Engineer for Ramboll Whitbybird. “Retaining this facade meant one of the project’s main drivers was then the resultant fixed floor levels.”

To achieve the same floor levels within a tight structural zone, beams with a maximum 500mm depth were used to marry into the original facade.

Initially steelwork began at basement level with Bourne Steel installing 35 columns to support the ground floor concrete slab. These supporting columns varied in size, but the largest 356mm x 406mm members weighed in at 8t each. 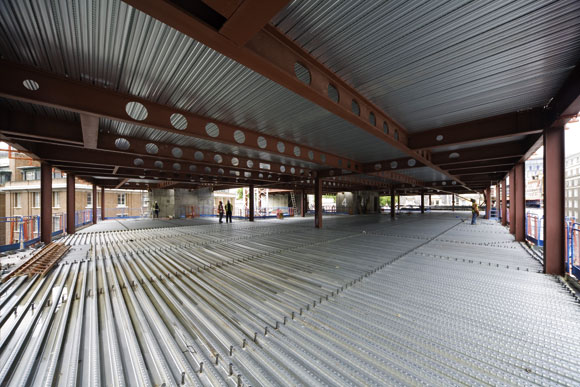 “We came on site around Easter time and installed these lower columns,” says Ryan Long, Project Manager for Bourne Steel. “Then once the ground slab was poured we came back and erected the majority of the steel frame between April and  August.

“We then split the project into phases and progressed quickly upwards,” adds Mr Long. “As with all inner city projects space and access was challenging, and logistically we had to work around other trades.”

One on-site tower crane was shared by all trades and steel erection was also aided by two cherrypickers working off of the ground floor slab.

Bourne’s phased steelwork erection saw it build the main commercial block up to the third floor splice, before turning attention to the residential area.

At first floor level Bourne had to erect two large 780mm deep transfer beams over a lightwell and loading bay area. “Columns would have come down right in the middle of this area, so these transfer members were, as well as being some of the heaviest pieces installed, vitally important.” adds Mr Roberts.

The building consists of six levels, including the ground floor, with approximately 1,000m² per floor. The basement will be used for retail storage, the ground floor will accommodate entrances and retail outlets, while all other levels will be office and residential apartments.

“The residential section of the project is nearly an independent frame,” explains Mr Long. “It shares some columns and a core, but it has lower floor heights as historically this part of the building has always been residential.”

“Again it was important to marry into the original floor heights and retained facade windows,” adds Mr Roberts.

Located to the rear and along the Chancery Lane frontage it will house two apartments per floor and features spans of no more than 5m widths, with columns and beams being mostly 254 x 254 sections. “It’s all fairly light stuff for this frame,” comments Mr Long.

The lighter residential frame was erected with light rolled steel beams and columns, and metal decking with an imposed load of 1.5kN/m², as opposed to 3.5 +1kN/m² in the commercial part of the structure. 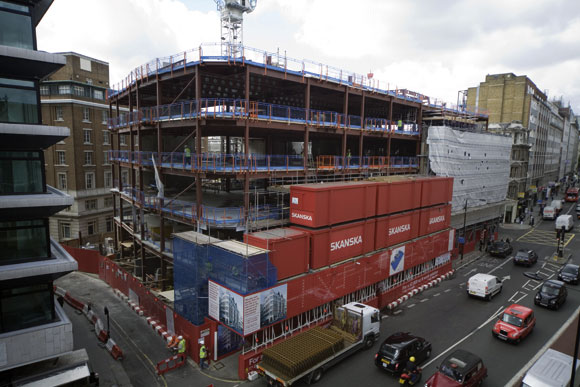 One half of the Holborn frontage incorporates a retained façade.

Because the site is very restricted, Bourne continued its phased erection process once the residential block had reached the third level. It then erected the commercial zone up to the top level working its way across the structure by finally erecting the upper three floors of the residential zone. Incidentally, the commercial zone has a grid pattern which incorporates 13m spans at 6m centres.

“Planning constraints dictated that we designed the building to look like a collection of individual buildings,” says Mr Roberts. “The amount of step in at fourth and fifth floor varies around the perimeter to help achieve this.”

Marrying the new steelwork to the retained facade also posed one of the biggest challenges of the project.

Mr Roberts, says: “We recommended an in-situ concrete strip around the floor perimeter which was a practical solution developed to help on site coordination between the old and new structure.

“Consequently the metal decking stopped 750mm short of the facade and the concrete perimeter strip connected to the retained masonry via steel brackets.”

Mr Long adds: “To replicate the retained facade’s appearance we are installing some lightweight steelwork which will form the mansard as well as chimneys.”

Along the top of the retained facade the original brick chimneys have been demolished, and so new steel framed modules have been erected, which will be clad to resemble the original features. Again, these new chimney features will aid the impression that the structure is a collection of individual buildings.

Summing up the successful steelwork job Mr Long, says: “The weather didn’t help, but we’ve negotiated a particularly bad summer and a short steel erection programme to complete the work on schedule.”