Elegant structure points the way ahead 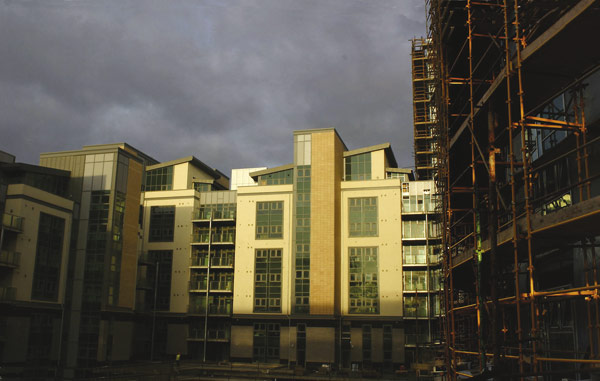 Steel was chosen for a residential development on Edinburgh’s waterfront for speed of construction. Improvements in structural efficiency then cut the cost too. Paul Wheeler reports.

The Platinum Point development at Leith in Edinburgh is a good example of a new breed of residential development — while unashamedly urban, high-rise and high density, they are also architecturally exuberant and desirable.

The first phase consists of 245 apartments within four blocks surrounding a large well-landscaped communal quadrant on the banks of the Firth of Forth. The development of five, 11 and 13-storey interconnected apartments and penthouses forms part of a proposed billion-pound regeneration of 16km of Edinburgh’s waterfront, which could ultimately see construction of over 18,000 new homes.

With the potential for so much development, it is significant that the first phase is steel-framed. The experience and benefits achieved put steel in a very strong position to be the chosen material for subsequent developments.

Douglas Thomson, Director of project architect Gilbert Associates, says that in the project’s early planning stages it took a fairly conventional approach to weighing up the benefits of designing with either concrete or steel. Although the concrete solution was slightly cheaper, “speed determined the decision to go with a traditional steel frame,” says Mr Thomson.

But part way into the process, the use of steel got much more innovative. Mr Thomson and Platinum Point developer Gregor Shore visited Westpoint Homes’ Berkeley Street development in Glasgow, where the Corus Slimdek flooring system was being put to innovative use. That visit was to have a major consequence for Platinum Point.

Design of the blocks evolved as the projct progressed 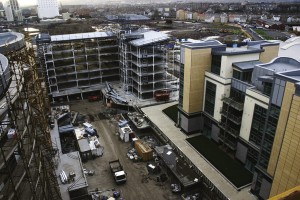 Four blocks of five to 13 storeys surround a square 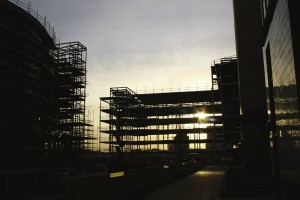 Like Platinum Point, this development included apartments over car parking. Bob Dickie, a Director with structural engineer Goodson Associates, says: “I was playing around with Slimdek for use in car parks when I realised that at Berkeley Street we could readily span the car park and configure the layout with just one column within each flat — and that was hidden in a wall.”

Fortuitously, Gregor Shore visited Berkeley Street at a time when it was possible to stand at one end of the structure and look all the way along — a full 70m without a single downstand beam.

Realising the potential benefits this could bring to Platinum Point, Gregor Shore duly appointed Mr Dickie as structural engineer for the project. As Mr Thomson, the Project Architect, says, “It was a major philosophical change and we needed an engineer experienced in the process.”

Platinum Point wasn’t, however, a direct copy of Berkeley Street. In particular the layout of the car parking was not so favourably in relation to the flats, which meant the design became rather complicated.

Even so, Mr Dickie maintains that despite the late switch in approach and the limitations this imposed, “we were still able to take £1.5M in costs out of a £14M shell”. That meant steel was not only winning in terms of speed and functionality, it was now also considerably cheaper than concrete.

The big advantage of the Slimdek flooring system is that by minimising floor zones, more storeys can be fitted into a given height, or ceiling heights can be maximised cost-effectively.

Alasdair McFarlan, Gregor Shore Project Manager, says there are many benefits that come from this, but at a prestige development like Platinum Point, achieving high ceilings “was a critical factor.”

The resulting design at Platinum Point has a maximum floor slab depth of 325mm, compared to 450mm with a conventional structure. This allows a floor to ceiling height of 2.55m to be maintained throughout the building, leading to a much greater sense of space within the apartments, without increasing overall height. Conversely where a conventional floor to ceiling height of 2.35m is required, use of Slimdek reduces the overall building envelope, cutting down on the amount of cladding materials used.

A further advantage is the system provides a clear soffit, which makes it much easier for follow-on trades to fix services too.  But the key benefit is the long spans achievable with the system which means that internal columns are kept to a minimum giving great flexibility to the internal layout.

Burton-on-Trent based Conder Structures won the £4.8M contract to supply 3,000t of beam and column steelwork for the development.

Vertical columns are square hol-low sections that can be easily and neatly contained within the party walls. And this, together with novel connection details, has enabled the structure to be “built into” the dividing walls without the need for piers, explains Conder’s Design Manager Gerrard Cox.

Mr Dickie’s aim was to develop a simple and straightforward design and Mr Thomson confirms: “we liked the simplicity of the detailing and the use of consistent beam sizes.”

An underlying principle in ensuring structural integrity of this open structure, explains Mr Dickie, has been to make the beams, rather than the columns, continuous. The corollary of this approach is the need for greater care during installation to achieve line and level when working with single storey height columns. “Where we couldn’t get columns straight down, we had to develop some complex lattice girder arrangements, but in general we managed to avoid massive transfer structures,” he adds.

Platinum Point’s four different phases went through a long gestation, so that each wing is a development of the previous one. In particular the third, says Mr Dickie, is structurally very different from the previous two, especially in its complicated roof. The final wing, closing the square, is different again. High wind loads on the tall structures beside the Forth of Firth added to the challenges.

As a general observation, Mr Dickie believes designing with steel is more straightforward than con-crete and in his quest to make buildings as structurally simple as possible, steel is usually his first choice.

From an architect’s perspective, Mr Thomson says Platinum Point is geometrically complex, with curves and projections, and he feels that “steel handled this well”. Cladding is provided by a variety of terracotta and aluminium rainscreens, with some rendered elements, curtain walling and masonry at lower levels. Although complicated, it would have been more so with a concrete frame, says Mr Thomson.

Conder will complete the structural steelwork this summer, allowing Gregor Shore to complete the building envelope by the end of the year, with apartment fit-out through 2005.