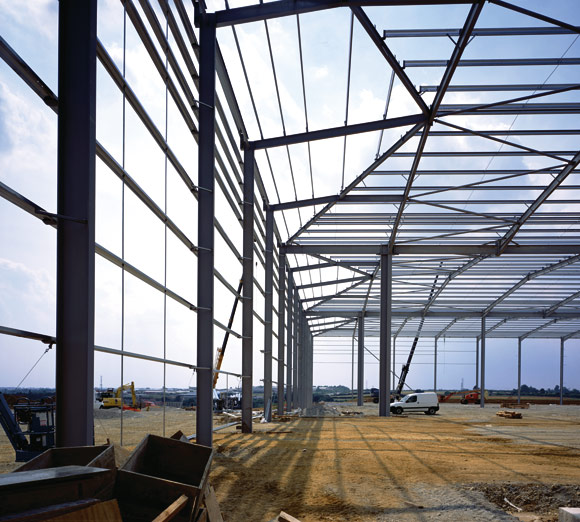 Sheds just keep getting bigger. This major new East Midlands warehouse will soon be joined by one twice as big.

ProLogis Park Kettering is strategically sited close to both the M1 and A1 and will be inaugurated by a 40,800 m² warehouse currently nearing completion.

The warehouse, due to be operational in May 2006, has been pre-let to kitchen equipment manufacturer BSH Home Appliances, a subsidiary of Bosch-Siemens, and in the words of ProLogis UK Vice-President Simon Jenkins will provide “a state-of-the art building in a prime location for UK distribution”.

Steelwork contractor Atlas Ward Structures constructed the steel portal frame under a design and build contract, following on from the success of a similar project at ProLogis Park Wellingborough.

The Kettering project uses 1250 tonnes of structural steelwork and is nearly twice the floor area of the Wellingborough job. The eight-span portal frame measures 236m wide overall, by 20 bays of 7.875m long. Height to the underside of the haunch is 11.5m. Atlas Ward designed the structure using the CSC Fastrak suite.

Construction began in May 2005. Steelwork erection was carried out on a fast-track programme between June and early August. “We finished a week ahead of programme,” says Atlas Ward Project Manager Peter Church.

The building includes a two-storey administrative office on one side and a part-internal, part-external two-storey hub at the rear, which forms the interface between the warehouse and goods going in and out. There are four level access doors and 29 dock levellers, and parking space for 98 trucks.

ProLogis Park Kettering will eventually provide 204,000m² of distribution space on the 49ha site. It is strategically located off junction 7 of the A14 east-west link road, which connects the M1 at Rugby with the A1 at Huntingdon, respectively 32km and 43km away. The developer currently has 11 new buildings on site in the UK, totalling over 400,000m².

Atlas Ward has designed, fabricated and erected over 4,800t of structural steel, representing almost 140,000m² of space, for ProLogis over the last year. It is already working with the same project team on its next ProLogis job, a warehouse of double the size on an adjacent part of the Kettering development. 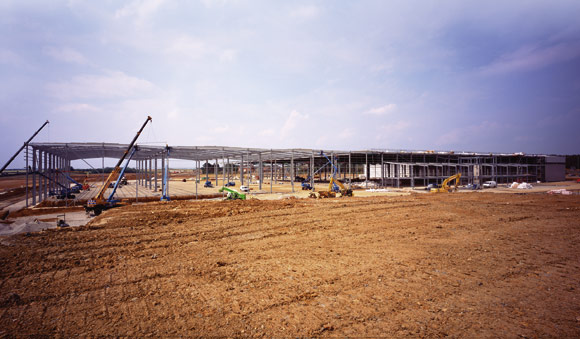