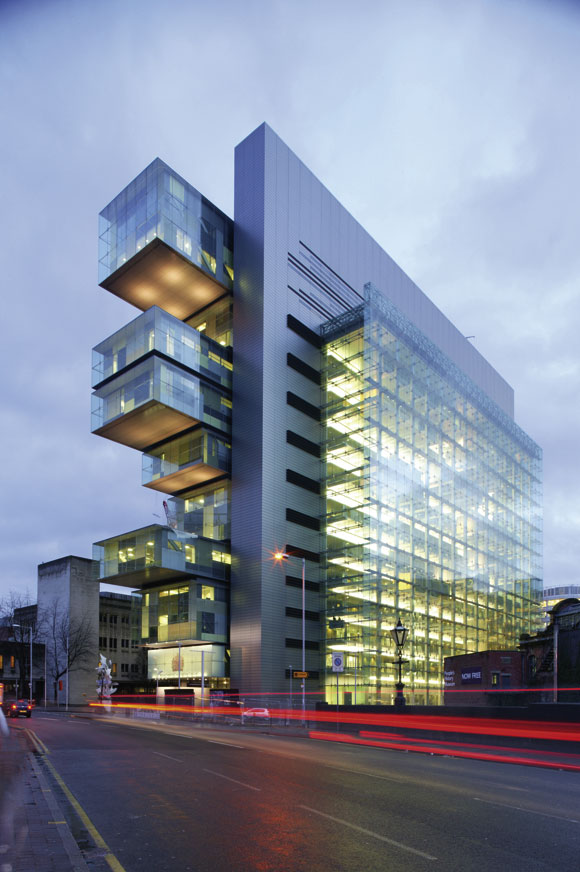 In the first of a new series on completed steel framed buildings Nick Barrett looks at Manchester’s celebrated Civil Justice Centre, the biggest court complex built in the UK since the Royal Courts of Justice in London during Queen Victoria’s reign. 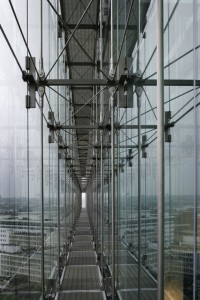 The fingers are fully glazed but not fully transparent as they contain courtrooms.
Photo courtesy of Denton Corker Marshall
Photography: Morley von Sternberg

When NSC first wrote about the Manchester Civil Justice Centre (MCJC) just after topping out in 2005 (NSC September 2005), we highlighted that its eye catching design represented a dramatic rethink of what a court building should look like. The completed structure is in fact a bit of a rethink of what any building should look like, as there is nothing quite like it in Manchester, or anywhere else, with its distinctive finger-like pods cantilevered from both ends, a striking atrium covering most of one elevation and an unusual high tech perforated metal cladding ‘veil’ on the other side.

The steel framed building has been lauded as a huge success, marking a step change from the traditional architectural approach in the City, which took inspiration from its red brick Victorian industrial heritage. The MCJC has been praised for managing to look modern and accessible at the same time as providing a link between surrounding Victorian structures, more distant post war commercial buildings and other developments currently underway.

Previous court buildings, whether for civil or criminal justice, seemed designed to impress and perhaps intimidate miscreants, and probably also witnesses, with the majesty of the law. This design however is intended to make the law seem more accessible and user friendly.

It seems to have succeeded. The 15 storey building has been almost universally praised by locals as well as the international architectural community. The design, by Australian owned firm Denton Corker Marshall (DCM), has been hailed as a major success in extending Manchester’s tradition of innovative architecture and urban design, bringing to life the City’s new financial and legal district, Spinningfields.

Design and environmental award winner
The building has been sweeping up design awards, including the 2007 Green Major Project of the Year Award at the Green Construction Awards. Judges praised the MCJC’s environmental solutions for integrating engineering and architecture. The main example of this is Mott MacDonald’s natural ventilation system, with a mechanical back up. The client wanted the building to be as naturally ventilated as possible, which meant designing the structure to accommodate of ductwork allowing air to be taken in through vents at the sides of the atrium to be circulated throughout the building. 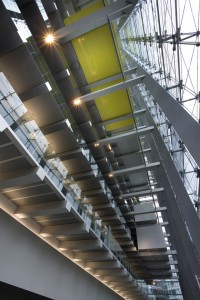 Mott MacDonald carried out a lot of modelling of how wind and air could be distributed through the building. An intelligent building management system brings in a back up forced ventilation mechanical system if wind speed drops.

Judges were also impressed by the perforated veil, which helps reduce cooling load energy consumption by 20%.

Landmark design
The design brief called for a building that would provide a landmark on the way into the City when approaching along the historic main thoroughfare of Bridge Street. DCM scored points in the competition for the project design by proposing a main entrance on Bridge Street rather than the entrance on a side street that the client originally envisaged.

The building provides 34,000 m2 of accommodation on 15 levels, housing 47 courtrooms, 75 consultation rooms and space for offices and support staff. It is conceived as a ‘layered’ building with different functions and degrees of transparency on particular levels. A striking atrium is one layer, providing the public areas and allowing for a 3.2m wide concourse at each level. Pods within the atrium provide meeting rooms for solicitors and their clients, designed to appear as if suspended in mid-air. The public pods connect to a light and airy concourse that is linked to the core.

The concrete core forms another layer, containing lifts and stairs and more meeting rooms, acting as a link to the next layer which contains courtooms, judges’ chambers, administrative offices and a library. Although the cantilevered fingers are fully glazed they are not intended to be fully transparent as they contain courtrooms; there are however external views from the end of each courtoom and the sky is visible through high level glazing along each side. 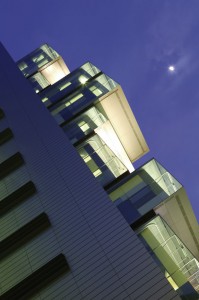 The final layer is a distinctive ‘environmental veil’ set 600mm outside the line of the Bridge Street façade. This is a perforated metal cladding, with the degree of perforation varying to allow an appropriate amount of natural light through to the room behind, providing shading or natural light as required.

The grid is irregular, with floor to ceiling heights of 5.6m up to the court areas on level 11. Administrative offices are mainly on the four floors above, with more standard ceiling heights.

In courtroom areas the maximum floor spans are 11.5m. Detailed vibration analysis was carried out for these long span areas and a response criteria twice as stringent as the normal standard for offices was adopted.

The architect says the working courts and offices are expressed as long rectilinear forms, articulated at each floor level and projecting at each end of the building as a varied composition of solid and void. In side elevation, these elements collectively establish a dynamic and distinctive building profile; in end elevation, they form a powerful sculptural interplay of light and shade, depth and complexity.

The architectural implication is that the courts are not forbidding or concealed, but open and accessible. This is achieved by maximising the use of glass, through which are visible coloured panels in the atrium and courtoom areas, reminiscent of a Mondrian painting. 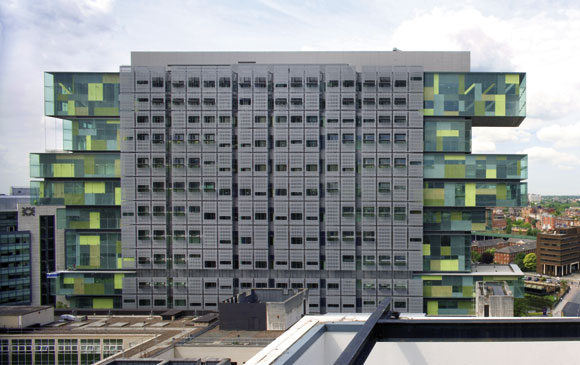 The most complex engineering aspect of the project is the cantilevering fingers, which are designed as trusses. The high tensile forces produced at the top of each ‘finger’ and the high compression at the bottom are distributed through the composite steel deck floors to the main slipformed concrete core, via tension reinforcement where appropriate,

The component members of each finger are made of plated sections generally 450mm deep and 220mm wide. Flanges are typically of 30mm plate with 15mm webs.

The trusses are up to four storeys high, fabricated and welded at steelwork contractor William Hare’s works with a built in precamber. Each truss was cut through the diagonals into sections and was bolted together on site. Pods were also assembled on site and craned into place.

A row of 700mm hollow equilateral triangular columns rise the full height of the atrium, restrained at irregular intervals by the beams which also support the pods. They are geneally designed to run for three storeys between restraints, which means nearly 18m because of the courtrooms. Sliding movement joints were placed between the atrium façade support structure and the main structure to accommodate differential thermal movement between the façade and the columns.

The columns are made from steel plate of either 15mm, 20mm or 35mm thickness, depending on the load on the column, welded at each triangle’s vertex. One challenge for the steelwork fabrication was achieving a sharp edge detail desired by the architect at each corner of the columns. After mocking up a number of solutions a detail was selected in which rather than attempt to achieve a perfect point, the welded joint is squared off to 15mm wide.

Close cooperation between steelwork contractor and the rest of the design team from the earliest stage paid dividends. For example, after constructing a model in Strucad that included details such as the glazing system frame, areas of potential problems and missing information were identified and resolved before fabrication.