AD 318: Tolerances on plan position of steelwork in bridges

Posted on February 1, 2008 by NSC3 in Advisory Desk, Technical 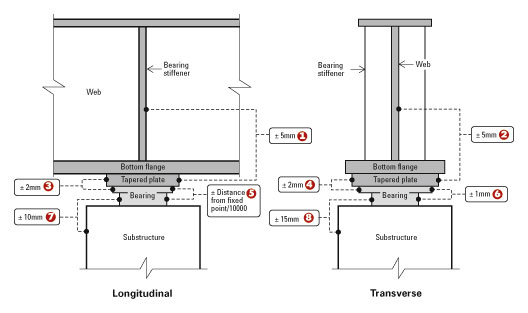 There has been some debate about the build-up of tolerances in bridge steelwork and the accuracy with which the steelwork can be positioned on the substructure. The tolerance of ±5 mm given in clause 6.302 iii) of the Model Appendix 18/1 (publication P170) is now generally accepted as being unrealistic and an over-simplification of what is
a complex issue. The following diagrams and table show typical longitudinal and transverse deviations in plan position (at datum temperature) between the various components, together with a brief commentary. The Model Appendix 18/1 needs to be modified to reflect these comments.

It is not intended to print a modified version of P170 but the electronic version that is available on Steelbiz (currently the Third Edition) will be updated as follows:

In clause 6.302 (“The tolerance on steelwork dimensions and levels at completion is as follows:”), the wording of (iii) will be modified and item (v) will be added. iii) on plan position of steelwork at bearings (structure at datum temperature):

Where Ls is distance from the fixed point.

v) on spacing of top flanges where permanent formwork is to be used: ±10mm.

It is also not intended to modify any of the Guidance Notes (publication P185) at present, because they will be updated in about a year’s time, to align with recommendations in the Eurocodes and in the execution standard,

In GN 1.04, under the heading of “Basic principles for good articulation”, add the following advice:

“Allow for fabrication tolerances in calculating design translations for the bearings

Include an allowance for systematic growth/shrinkage of the steelwork due to fabrication tolerances, as quantified in GN 5.03/3 Tolerances on Length.” In GN 5.03, the above change to the Model Appendix 18/1 clause 6.302 iii) makes some of the text

in GN 5.03 redundant. Under the heading “Tolerances on length”, disregard the comments in paragraphs 2 & 3 (i.e. from “Model Appendix 18/1 clause …” to “… unnecessary tolerances upon each other.”).