All the right credentials 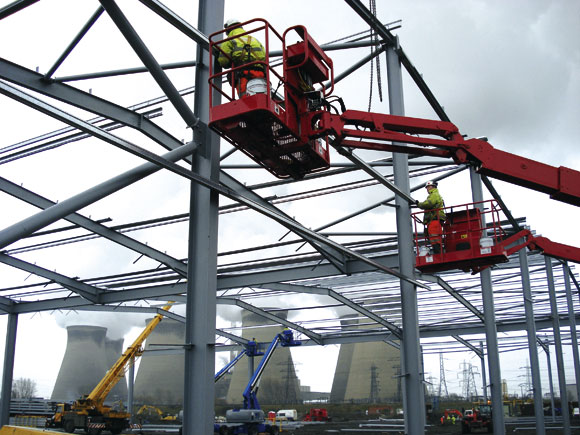 A new sustainability driven factory is relying on steelwork to provide its required long spans and quick construction time.

A brownfield site in Ferrybridge, West Yorkshire, is the location for Lafarge’s new £35M plasterboard manufacturing and distribution facility.

On the site of the former Ferrybridge ‘B’ Power Station, the new factory is adjacent to the currently operating ‘C’ power station, and with this location comes a major, if slightly unlikely, sustainability benefit.

The power station has installed a flue gas desulphurisation plant to cut emissions from its flue stacks and a by-product of this equipment is synthetic gypsum.

Nigel Clephan, Lafarge Project Manager, explains: “Gypsum, either natural or synthetic, is the main raw material used in the production of plasterboard. By having our latest facility here at Ferrybridge we will be using the by-product of the power station’s latest emissions reduction equipment as our main raw material.”

Making use of this by-product has a number of sustainability benefits, such as a reduction in the number of trucks delivering raw materials to the site and the fact that synthetic gypsum increases production efficiency as it is delivered as a wet slurry.

“This means the product doesn’t have to go through a crushing stage as the initial stage of our process has already been carried out,” explains Mr Clephan. 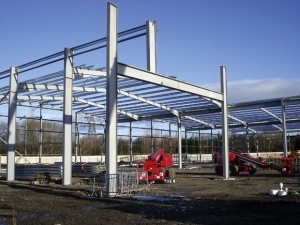 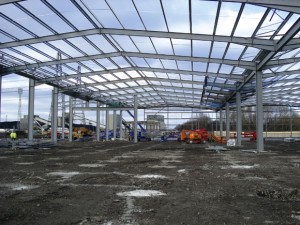 The plan, once construction is complete and production is up and running later this year, is for the synthetic gypsum for the plasterboard manufacturing to be delivered via a conveyor belt system from the Ferrybridge ‘C’ Power Station. The rest of the required raw material – natural gypsum – will arrive by rail and road.

The construction of the plasterboard facility is now well under way, with the steel frame nearing completion on the majority of the project.

Caunton Engineering is fabricating, supplying and erecting approximately 800t of steelwork for the main facility, with a further 350t for an adjacent gypsum storage house which will begin construction this month (April).

Paul Cadman, Project Manager at consulting engineer White Young Green, says the project would have been tricky to construct in any other material than steel, particularly with the time constraints.

The need for a warehouse zone with minimal internal columns and long spans led the client – Lafarge – to request a steel-framed factory.

“Steel is also quicker to construct with, and Lafarge want the factory up and running before the end of the year. And, importantly, much of the equipment will start to be installed before the building is even finished,” adds Mr Cadman.

Another important consideration in choosing steel was its weight compared to concrete, and consequently the need to install fewer piles.

The steel frame is being erected on new concrete piled foundations around 12m deep. However, if the building was concrete framed the piles would have needed to be deeper and the process would have been more complicated and expensive, explains Mr Cadman.

As the site was once a power station, Clugston had to do some extensive groundworks when they started work in August 2006.

The old foundations were very deep and most had to be dug out along with many other associated obstructions. In line with the project’s sustainability credentials, Clugston Project Manager Richard Bowmer, says all of the foundations were broken out, crushed, then re-used for the piling working platform and as bulk fill.

The main factory building is approximately 25,000m² and consists of a large warehouse and distribution area, and an attached plasterboard processing area with plant rooms. 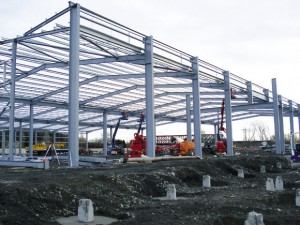 The design of the processing area was modified at quite a late stage. Some columns were discovered to be in the way of the intended equipment and so three of the steel members were omitted.

Denis Morton, Project Manager for Caunton, explains the steelwork was engineered to suit the revised requirement.

Steel’s flexibility was highlighted as Caunton replaced one column with portal bracing, while the other members were replaced with longer 16m rafters to increase the grid size.

“The new equipment couldn’t have been installed with the original grid sizes as columns were positioned on areas where plant machinery would be standing, and steel obviously lends itself to these kinds of alterations,” says Mr Cadman.

The larger of the two structures will contain two silos and these units have already been installed with the steelwork having to be erected around them. “They would have been too heavy to lift into the completed structures,” explains Mr Morton. “So we are erecting the steel frame and floors around them before putting the roof on.”

Once the plant houses are complete, Caunton will begin erecting the steelwork for the final phase of the project.

This last piece of the jigsaw is the gypsum store, which will be a single storey stand-alone structure measuring 80m x 42m with 10 x 8m bays.

This building will accept the synthetic gypsum from the adjacent power station via a conveyor belt system. To support this conveyor system the portal frame structure will have a 4m deep lattice truss across the entire roof width.

Lafarge is scheduled to produce the first sections of plasterboard at the new Ferrybridge facility in October, only five months after the steelwork has been completed.