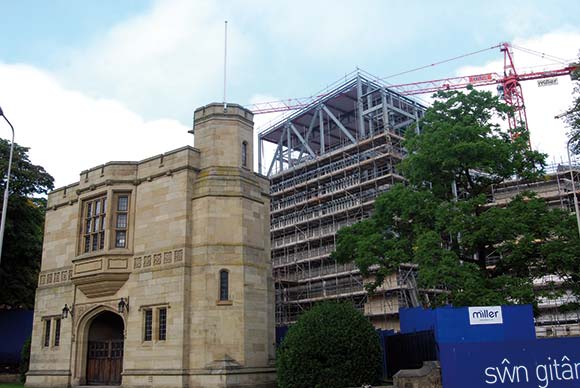 A new arts and innovation centre at Bangor University will provide first class facilities for students as well as becoming a hub for the local community. Martin Cooper reports

Building bridges between the arts and science, the University and the local community, and the city to the wider world are not aims usually associated with a construction project.

But this is precisely what the Pontio (Welsh for ‘to bridge’) Project will hopefully achieve in Bangor once it opens next year.

With its 500-seat theatre, cinema, spacious lecture theatres, design and innovation centre, students union as well as a bar and café, the project will create a link between the nearby city centre and the existing University buildings.

The project is being built into the steep slope of the hill that the listed university main arts building sits upon and stretches from near the summit to end at the foot of the hill close the Memorial Arch, another local landmark.

Bringing the gown to the town is how some have described the job, as many of the facilities will be open to the general public as well as students.

A cultural beacon for the people of Wales and their language, Pontio will become a hub for the local community, says the University. Its light airy spaces, relaxing cafés and outdoor amphitheatre will provide people of all ages with places to meet, greet or be entertained.

Constructing these new facilities has been a prime objective for some time, and much of the sloping site’s groundworks and a large retaining wall were completed before Miller Construction started on site last year.

These preliminary works included the demolition of a theatre, which will be replaced by the project. The University and the City have been without such a facility for sometime now and so speed of construction is vital, not just for theatre goers, but for the project in general.

“Steel has been used for much of the project for its speed of construction as well as the many long spans we have,” explains Jon Paull, Atkins senior Structural Engineer.

“Once the structure reaches a series of flat plateaus up the slope, steelwork then springs off the concrete retaining wall and substructures,” adds Mr Paull.

The theatre space is formed by a large concrete box that is surrounded by an independent steel frame forming the circulation areas, back of house space and dressing rooms.

“For acoustics both frames are totally isolated and independent of each other,” says Shaun Thomas, Miller Construction Senior Project Manager.

Acoustic isolation has also been necessary above the theatre space as this part of the project is topped by a large open plan lecture theatre.

Elland Steel had to use a 250t capacity mobile crane to install these large trusses as they were too heavy for the tower crane.

The lecture theatre is stabilised by a series of cross bracings, which in turn are supported, by a series of Vierendeel trusses that span the full height of the facade.

Because of the various functions of the project the building is in fact split into four different structures, all interlinked but separated by movement joints.

The functions also mean different stability systems have had to be employed. Cross bracing has been inserted around most of the structures, but in areas with large glazed façades, either shear cores or portalised bays have been utilised.

A more hybrid approach has been utilised for the cinema area that is partially enclosed by the project’s retaining wall. Here the upper level containing the cinema is steel framed.

“A large open column free space was needed for the cinema and this has been created by a series of 17m long steel trusses,” says Mr Thomas.

Work is currently progressing on schedule and Elland Steel Structures completed the steel erection in September. Construction is due for completion next May and after a fit out programme the facilities will be open during the autumn. 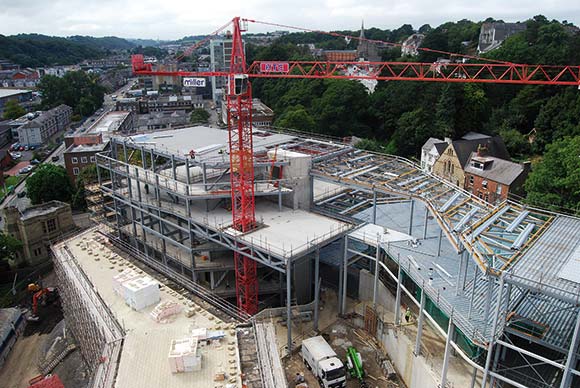 The steel frame is divided into separate structures by movement joints

The main theatre will boast a flexible auditorium with the ability to transform the venue. From a 450-seat traditional proscenium-arch theatre experience, to theatre-in-the-round, to standing only gigs for 700 plus, this will be the first space of its kind in north west Wales.

The lecture theatre above the theatre will seat 120 for more intimate events as well as being an ideal venue for community-based activities and student societies, while the 200-seat cinema will be supported by state-of-the-art facilities.

The innovation and design studios will boost the University’s cross-disciplinary teaching programmes and encourage collaborative work between students, staff and local businesses.

Pontio will also be home to the Student Union’s offices and student radio Storm FM, putting them back at the heart of the campus.

Throughout the Centre, new teaching and social learning spaces will be created to support a modern educational environment, along with digital showcase facilities to enable the display of work using the latest in digital technology. 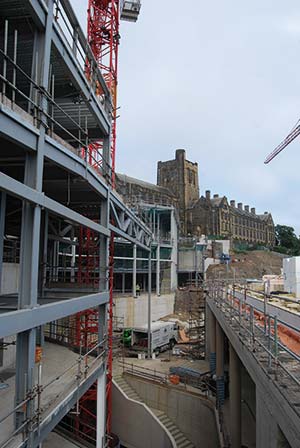 As well as linking Deinol Road in Bangor city centre with the existing university buildings at the top of the hill, the Pontio Project will also aim to preserve views of the historic main arts building from the memorial arch.

This will be achieved by a long fully glazed atrium or street that will divide the building in half and allow people to see the top of the hill from the main entrance.

Providing the main circulation within the building, the atrium will also deliver a covered route up the hill to the other university buildings.

Secondary steelwork will form the atrium, connecting to the main steel frame via a series of sliding connections and intricate detailing.

“The high level glazed atrium spans between three independent structures and so in effect, the glazing system also acts as  a movement joint,” explains Mr Paull.