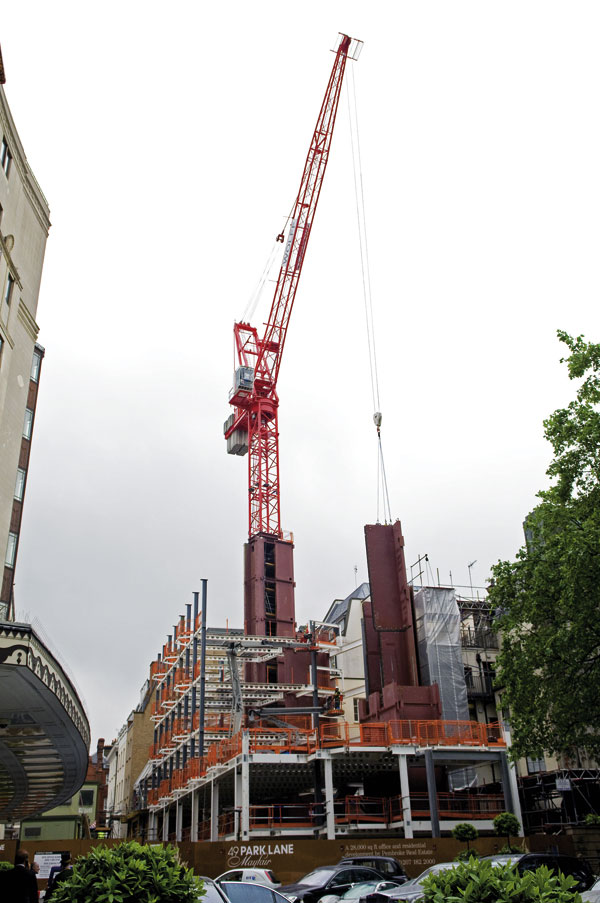 A new structure on Park Lane in London is being erected by a tower crane bolted on top of the building’s Corus Bi-Steel core. Construction of the first of two nine storey high cores for the new office and residential building began in April. The use of Corefast has reduced the construction programme by an estimated 8 weeks.

The site is very confined, between an existing building and a road leaving little room for lay down areas and this made positioning of the tower crane a key issue. The solution was to build the first structural core in Corefast, position the tower crane on top of it and then use this to install the remaining steelwork.

A special steel ‘crane saddle’ for the top of the core was designed and fabricated by Corus. The saddle was levelled and bolted on to the top of the first Corefast core, which was then filled with concrete, anchoring the platform in place. The tower crane was lifted on top of the core and bolted to the saddle, enabling the entire steel frame, the second structural core, and a corefast shear wall to be erected without the need for a crane on the ground.

Billington Structures is currently erecting the structure’s steel frame and the building is expected to be completed and open in April 2009.