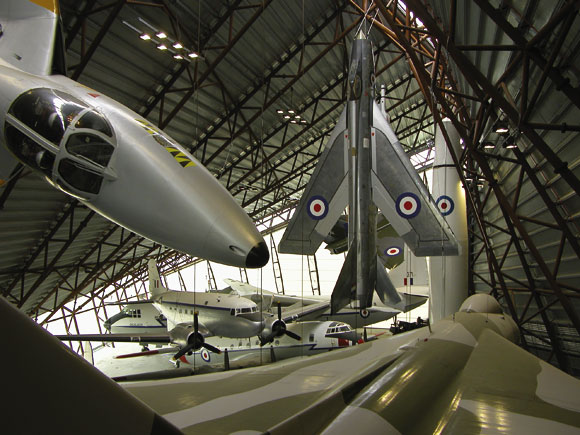 One of the largest collections of aircraft from the Cold War has been brought together in a new landmark structure. The Royal Air Force Museum Cosford is now home to the National Cold War Exhibition, one of the first to focus solely on this significant part of modern history.

Some of the aircraft on display are the only surviving examples and needed to be preserved in a purpose designed building with controlled humidity and lighting. Architects Feilden Clegg Bradley, structural engineer Michael Barclay Partnership and building services engineer Max Fordham designed the innovative structure, formed of two triangular areas to reflect its content and the Cold War period.

The £12.4M project was completed in December 2006 and will open to the public this month. The exhibition tells the whole story of the Cold War from culture and sport to economics and space with missiles, radar designation models, military vehicles and even a piece of the Berlin Wall on display as well as a number of interactive kiosks.

The design consists of a central spine supporting a series of steel trusses of varying length and pitch spaced 8.4m apart and which fan out and slope on angles from 25° to vertical. The finished structure, clad in steel, is characterised by its sweeping curves in two directions despite every structural element being straight. 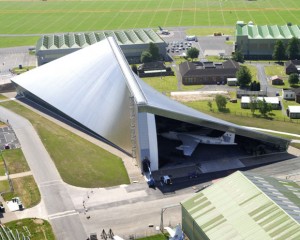 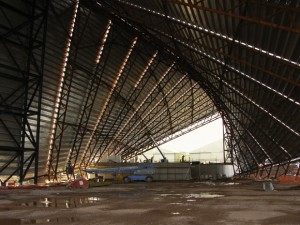 Inside view of the curved triangular central spine

The building measures 160m in length, has a maximum width of 60m and is 30m high. The fabric covered gable ends have been designed to be removable making it possible to take the aircraft in and out when necessary.

Steelwork contractor SH Structures, carried out the supply and installation of the 672t of complex steel used for the project. (See New Steel Construction October 2005 for further information on the construction details.)

The central spine includes a 75m long elevated walkway, which divides the two triangular areas and features a lift up to a look out area to view the museum from above and to get a closer look at suspended aircraft.

The design provides over 8,000m² of space for two classrooms and an auditorium as well as the huge display hall. A total of 17 aircraft are now on display including Britain’s three V-Bombers; Vulcan, Victor and Valiant and the massive Short Belfast with its 45m wingspan. A number of aircraft are also suspended from the roof such as a Canberra at 13t (with the engine removed) and a 9t Dakota.

Director General of the RAF Museum Michael Fopp said: “This is the largest expansion at the museum since it was founded and it is the world’s first exhibition dedicated to the Cold War. It reflects not only the aircraft but the lifestyle and culture.

“The building itself is designed to show the divided ideologies of the Cold War with a dark and a light side.” The ‘dark’ side houses the missile carriers and weapons and the ‘light’ side holds the transporters and items associated with the lifestyle of the period and is the only part of the structure with glazing. The exposed structural steelwork has been designed to be a significant feature of the structure and is unpainted to emphasise the atmosphere and the industrial feel of the Cold War.