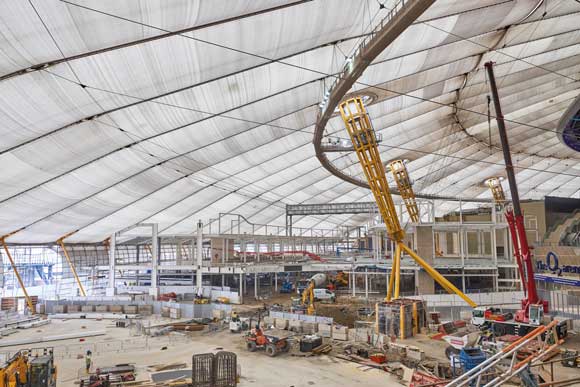 Construction progresses within the vast dome

A retail village being constructed around part of The O₂ Arena is helping to finally complete the ring of outlets surrounding the well-known venue. Martin Cooper reports.

Home to the renowned 21,000-capacity O₂ Arena, this current construction work, being undertaken by ISG on a £69M design and build contract, will on completion help to finally ring the famous venue with outlets.

This is not the first construction project to have taken place within the domed structure. A trawl back through history reveals that once the millennial celebrations and exhibition, that the Dome had been built to house, had finished, the structure faced an uncertain future.

Demolition was mooted in some quarters, but once Anschutz Entertainment Group took over ownership in 2007 it reinvented the Dome by constructing the arena and a street of bars and restaurants [see NSC May 2006].

That initial steel-framed project, which also included a night club and a cinema, occupied the centre of the Dome (for the arena), with the other elements wrapping around approximately half the circumference of the venue.

Spread in an arc around the northern part of the arena, the 80-plus retail outlets for this latest scheme will be arranged either side of a central street. They will link The O₂’s main entrance at one end to the existing entertainment mall at the other. 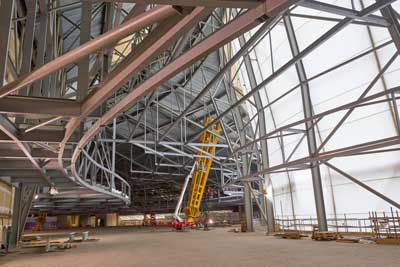 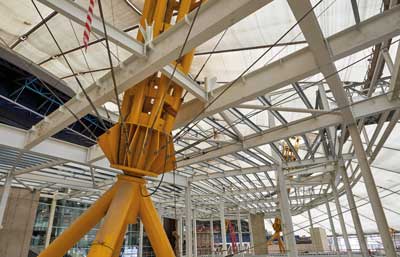 The dome’s supporting pylons protrude through the steelwork

The construction job is officially known as Project Mint, with the analogy referring to the scheme’s resemblance to a Polo Mint with the arena acting as the central hole. “The retail outlets will complete the outer ring, creating a dining and shopping destination,” explains ISG Project Director Fraser Tanner.

The single storey retail area is being built on top of a large concrete slab that spans the arena’s loading bay. This floor was originally constructed in 2006 to accommodate a super casino, but the gambling Mecca was later scrapped and since then the slab had remained unused.

A series of trusses spans the slab creating a large column-free space. The trusses support lightweight metal decking to form a roof, which was constructed to make sure the casino was watertight if the Dome’s fabric roof was ever removed.

The trusses vary in length with the longest spanning up to 60m. They are all tapered at both ends and have a maximum depth of 3m in the centre.

Some shorter trusses have been installed around the large Blackwall Tunnel ventilation shaft that protrudes upwards through the slab and out through an opening in The O₂’s fabric roof.

This part of the village mall is described as a pinch point, as the slab and the retail outlets squeeze around the vent through a narrower area. There will only be outlets on one side of the mall in this zone.

“With the trusses in place it was decided that the steelwork would be hung from them, thereby creating large column-free flexible retail areas,” explains BuroHappold Engineering Technical Director Jonathan Roynon.

“It also meant we averted adding more load to the slab, as strengthening works on this structure would have been difficult due to the loading bay and arena back-of-house facilities that sit beneath the structure being in constant use.”

Some modifications were however needed to the trusses, as they were never intended to support an underslung steel frame. ISG and BuroHappold were able to get hold of the original design details from Watson Steel (now Severfield).

Using this information, it was decided that, in order to make the trusses able to support the extra loads from the new steel frame as well as some associated plant decks, a series of 35mm-thick stiffening plates would be welded to the trusses, while all of the node connections, approximately 36 on each truss, had to be strengthened.

Not wanting to overload the slab also had an effect on what kind of plant equipment steelwork contractor Bourne Steel could use during its erection programme and the strengthening works.

MEWPs were deemed to be too heavy and so a number of spider access units, which spread their load via stabilisers, were used.

As the slab was originally built with just a casino in mind, for today’s retail project it has been built a little too high. Consequently, in the area where the slab meets the two-storey steel frame, the upper level gradually slopes down by 1m.

“Maximising the floor-to-ceiling heights on the two-storey zone was important as we have made provision for mezzanine floors to be installed, at a later date, on the ground and first floors,” explains Mr Roynon.

The two steel-framed retail elements are both stand-alone structures deriving no stability from the original steelwork malls, roof or arena, but instead relying on new concrete lift and stair cores.

Both are nominally based around 7.5m column spacings, although the grid patterns are dictated by the radial curve of The O₂.

The retail outlets have required over 1,800t of steel, all of which has been fabricated, supplied and erected by Bourne Steel.

“It has been a challenging project working on many work fronts at the same time across a large area spanning some 400m. We have had an excellent team both on and off site and have completed the main works ahead of our contractual programme,” sums up Bourne Steel Divisional Manager Andy Davies.

ISG will begin handing over retail units from May and the entire project is expected to be complete by Autumn 2018. 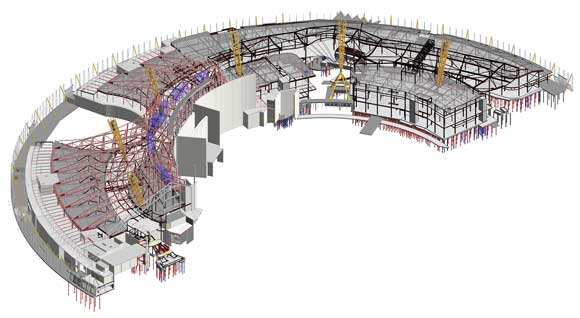 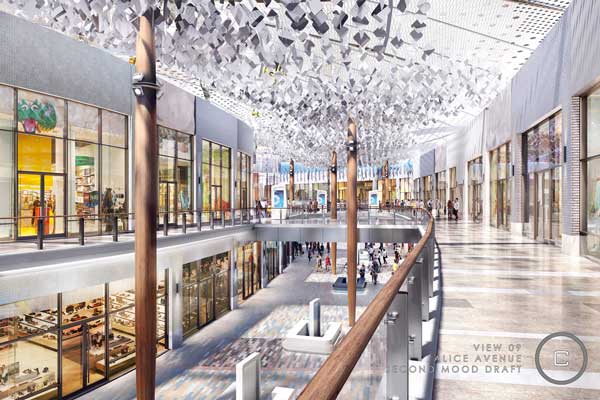 The two-storey retail zone will be spanned by a steel diagrid roof structure supporting a steel mesh. Measuring 36m at its widest part and 156m-long, the structure is formed with a series of CHS members up to 356mm in diameter.

Containing 125t of structural steelwork, this part of the scheme was fabricated, supplied and erected by S H Structures. The company also erected the eight cigar-shaped glulam columns that provide the primary support for the roof.

The roof structure also connects back to the main steel frame of the retail zone at approximately 20 roof level locations.
Providing this part of the retail village with some high-level visual drama, a total of 6,500 lightweight aluminium petals are suspended from the underside of the steel mesh roof.

Meanwhile, the single storey retail part of the village will be spanned by a stretched fabric roof hung from the bottom booms of the large existing trusses that span the supporting slab. 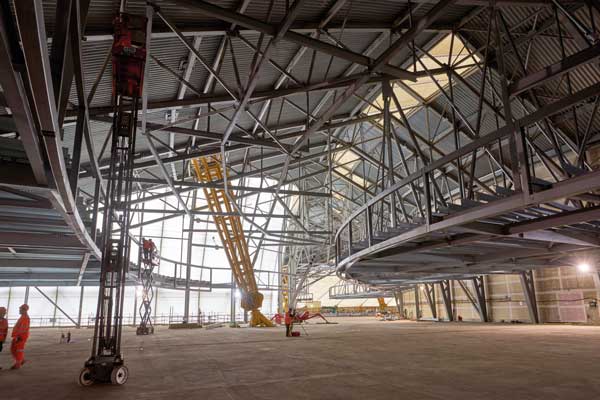 Michael Sansom of the SCI discusses the reuse of steel and ‘design for deconstruction’.

Although not specifically intended when first designed, the ability to reuse the trusses for retail units demonstrates the versatility of steel structures in the hands of structural steel experts.

By retaining the slab and the existing steel trusses, waste is minimised and resources preserved; both key aspects of the evolving circular economy agenda. Not to mention the avoided costs and inconvenience were the existing slab to be broken out and the trusses recycled and replaced with a new, bespoke retail design.

More thought should be given, particularly for structures like The O₂ which are likely to be frequently reconfigured, about how they can be designed to be adaptable and extendable so that projects like this become the norm. This ‘design for deconstruction’ concept should be extended to all buildings going forward. Principles for doing this are given here:
https://www.steelconstruction.info/Steel_and_the_circular_economy#Design_for_deconstruction_and_reuse

The adaptation of the steel trusses at The O₂ also demonstrates the importance of material and design data and information in facilitating the reuse of steel structures. In this case, BuroHappold was able to obtain the 2006 design information from Severfield and based on this, assess the existing structure and propose strengthening measures for the trusses. For older structures, this is frequently not the case and often expensive, intrusive surveys and testing are required before refurbishment or adaptation can happen.

SCI is exploring how BIM can be used to collate and securely store structural steel information to facilitate projects like Project Mint in the future. Material traceability, data security and future-proofing are key considerations but mill test certificates, block-chain and open IFC formats are readily available solutions.

The UK steel construction sector has been using what is now called ‘BIM’ for over 30 years, and capturing the necessary material and design information to facilitate future reuse of steel structures is a simple thing for the sector to do. While there remain significant barriers to the mainstream reuse of structural steel, certainly within existing business models, putting in place a means to facilitate future reuse of steel makes good sense for the sector and wider society.

SCI’s R&D into steel reuse includes the EU projects REDUCE and PROGRESS. The focus of REDUCE is demountable composite flooring solutions and the focus of PROGRESS is the reuse of single storey industrial buildings. Both projects are exploring the use of BIM to facilitate the deconstruction and reuse of steel structures.