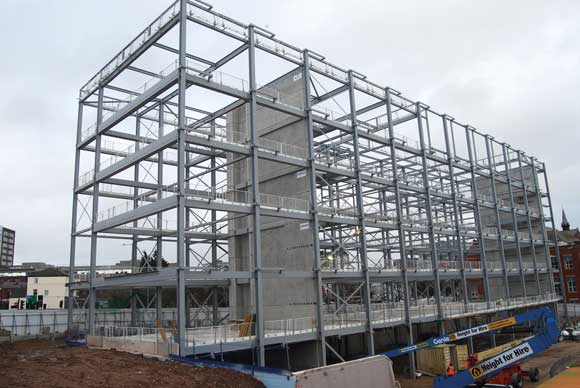 A steel solution was chosen for its flexibility

A flat soffit and exposed steelwork will all work towards creating a suitable industrial-looking environment for a university’s engineering and research building.

The idea behind the £30M EIC is to create an environment that inspires teaching, research and knowledge exchange, establishing the University as a leader in engineering innovation.

The EIC will capitalise on the location of the University at the centre of one of the most intensive engineering and manufacturing areas in the UK to create an internationally competitive facility that will bring together the region’s expertise from within academia and industry.

The EIC will be equipped to the highest standard with technology demonstration areas and specialist work areas to create an integrated space for teaching, research and knowledge exchange.

Staff, students and local companies will have access to state-of-the-art equipment, including flight simulators, Formula Student cars and specialist electronics laboratories, which will also allow users to work on a variety of projects.

UCLan says its vision over the next 10 years is to create a unified, sustainable and welcoming campus which will enhance the experience for all those visiting the University. The new campus will integrate seamlessly with the rest of the city, benefitting current and future generations of students, staff, visitors and the wider community. 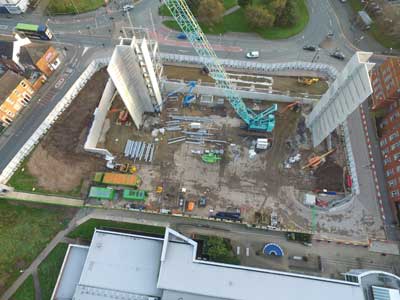 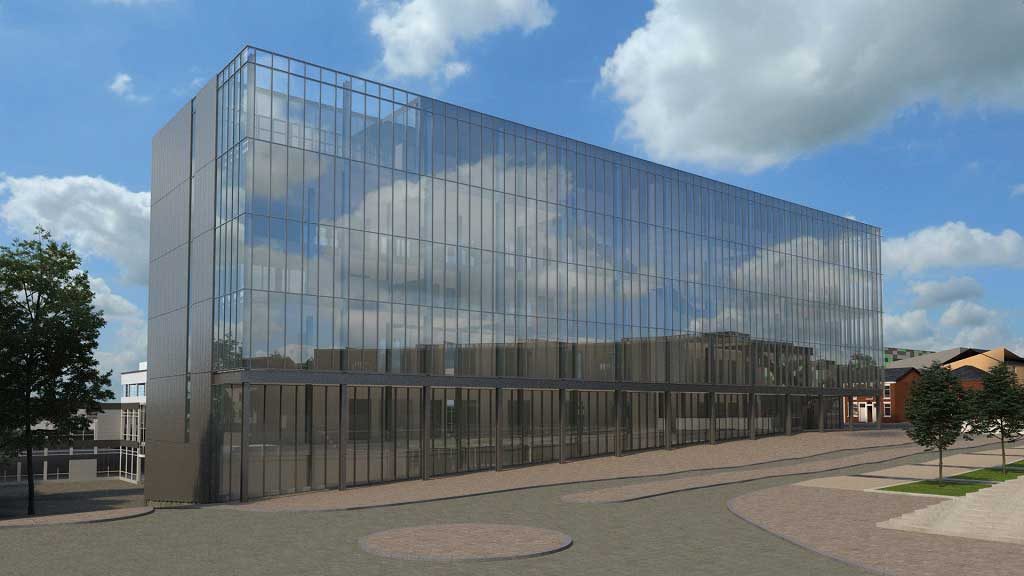 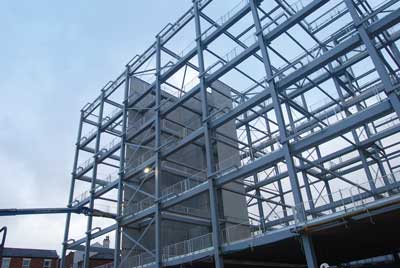 Work on the site, which had previously been used as a car park, started last summer. Prior to the structure’s steel frame being erected, main contractor BAM Construction had to install piled foundations along with a retaining wall along three of the elevations.

Recycled stone was brought in to form a solid base for the piling rig to work from, and a total of 230 bored piles were installed to a depth of 25m.

Preliminary work then included erecting the building’s two precast concrete cores, which are positioned at either end of the structure. Once these were up, the steelwork programme was able to commence, as the cores provide the frame’s overall stability.

The two cores are made up of 12 precast elements each, with some sections weighing up to 30t. A 250t-capacity crawler crane was needed to lift these heavy precast elements into place, and once this work was completed it remained on-site to erect the steel frame.

“Having made solid and dry ground for the site helped both the steel and precast erections,” explains BAM Construction Project Manager Simon Atkinson. “It meant the steelwork had a dry and solid area to be temporarily stored on, while the cranes and MEWPs had good ground to work from.”

The six-storey steel frame is approximately 70m-long x 20m-wide and 30m-high. It has been designed around a regular grid which incorporates two spans, one of 13.5m and another at 6.5m. The longer span accommodates the building’s workshops and teaching spaces, while the shorter span houses circulation routes, a main staircase and some smaller ancillary classrooms.

Within the frame a series of steel box sections supports 450mm-deep precast flooring planks within their depth via a welded plate on the bottom flange. These sections work in conjunction with T-section members spanning in the opposite direction, which also sit within the plank depth to create the flat soffit.

“This framing solution was chosen as it creates a flat soffit from which the services will be suspended,” explains BDP Project Engineer Chris Goodwin.

“The client has an aspiration for a clean soffit as it helps – along with the building’s exposed steelwork – to create an industrial-feel to the structure.”

By having an exposed structural frame behind glazed cladding, the building is promoting itself as engineering educational tool.

The building’s long column-free spaces have provided the university with plenty of flexibility.

In the upper floors, this flexibility provides the ability to move partitions between classrooms to suit future use requirements and also means any services for new equipment will be unrestricted. On the ground floor, it provides open-plan workshop spaces for positioning machinery.

Stability is provided by the precast cores and precast planks acting as a floor diaphragm. As part of the floor, a lightweight T-section allowed for a flat soffit, but during construction, temporary bracing was required before the planks were installed.

The steel bracing, erected by the steelwork contractor Elland Steel Structures, allowed the entirety of the steelwork to be erected at once, removing the requirement of waiting for the planks to achieve diaphragm action and so shortened the construction programme.

Columns were brought to site in 15m-long sections, meaning the structure’s 30m-high frame has one splice just above third floor. The internal, and heaviest, columns are 305 UC sections.

According to Elland’s Site Manager Curtis Lewis, the steel erection programme progressed from one end of the building to the other, with each bay built up to the structure’s full height.

The heaviest steel member was only 6t, however the large 250t-capacity crawler crane had to be utilised. With only one location available for any crane on the site, and very little room for it to manoeuvre, the crane had to be able to lift some columns and beams over the entire frame.

“The capacity and reach was also needed for the precast plank installation which we also undertook,” explains Mr Lewis. “We installed the flooring once the steelwork was complete and so the planks had to be lifted up over the frame and then down through the roof which was left off until the flooring was complete.”