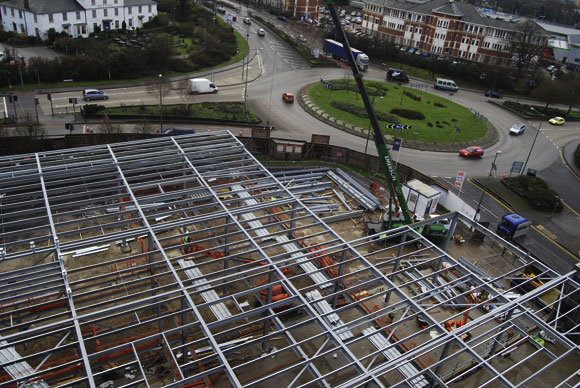 A prominent site in the Kent county town of Maidstone is being transformed into an innovative library and history centre with the aid of a steel frame. NSC reports.

Steelwork has been completed for one of the most innovative library and history centres in the UK. Under construction in the Kent county town of Maidstone, the new facility is being purpose built to protect and house archive material, and to provide a 21st century library in the heart of Kent.

Known as the Kent History and Library Centre, it will house around 14km of historic local material, some of which   dates back to 699 AD. The county has a wealth of documents, photographs, images, maps and records, but to make sure they survive for future generations they need to be kept in carefully controlled conditions. The project will also house a community history area, archive search room, digital studio and a large space for displays and events.

As part of the overall scheme, two eight-storey residential blocks have been constructed on behalf of housing and care provider, Housing 21 and West Kent Housing Association.

These two structurally independent buildings are located towards the back of the site overlooking the library. 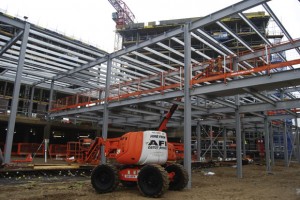 Work started during March 2010, with main contractor Warings excavating an area for the partially subterranean archive facility and then piling the entire site. During the initial stages of the programme some archaeological digging was undertaken on what is a very historical site.

Until recently the site was owned by the Ministry of Defence and it was once occupied by the barracks of a cavalry unit dating back to the 1700s. Although the Army is still based nearby in the town, the project’s site has been earmarked for development for sometime.

For insulation reasons and to keep the archive facility humidity free, this part of the building is basically a large partially submerged concrete box. The archive facility along with the two concrete framed residential blocks, were the first parts of the job to be built.

The concrete parts of the project were undertaken first to give as long as possible to let them dry-out. The front portion of the project – where the library sits – was initially used as a storage area for reinforcement.

That is one of the reasons why steel was chosen for the library. It suited the programme and once the concreting was completed and the area was no longer needed for storage, the steel frame was quick to erect.

As well as the speed of construction, Graham Bedford, Reuby and Stagg Director and Project Engineer, says: “Although the internal spans aren’t that long, up to 10m maximum, with these lengths, steel is the material of choice for economy and programme.”

Erected by ACL Structures, the steel frame consists of a triangular wedge at the front of the site, measuring 35m along its two main elevations, west and south. The third elevation adjoins the concrete archive facility which sits between the library and residential blocks. This archive box also sits partially below the library as a basement level. 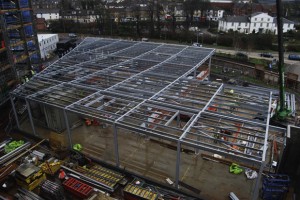 “The steel frame consists of a braced beam and column box,” adds Mr Bedford. “However some stability is derived from the archive facility’s concrete wall which the steelwork is tied into along the back elevation.”

Essentially an 8m-high single storey structure, the library building also contains a T-shaped mezzanine level which has been erected along with the main frame. Constructed around a varying grid pattern, ACL Structures used a three man gang of erectors, plus one mobile crane operator to complete its programme.

The steelwork was delivered to site in 20t loads that had been detailed into erectable quantities. Each phase was then erected almost immediately from the trucks, making use of one mobile crane and three cherrypickers.

“As the concreting works had been completed before we started on site, we had a clear area in which to work and lay-down our steelwork,” says Colin Grant ACL Structures’ Contracts Manager. “This allowed us to work unhindered and complete the steel erection and metal decking on schedule.”

The columns vary in member size from 203 sections to slightly larger 254 sections, all of which were brought to site in full lengths of up to 8m. Smaller 5m high columns have been erected towards the back of the library as this portion of the structure sits on top of the archive box slab.

Working in this area meant ACL had to be aware of the weight restrictions associated with the area’s slab and so the company had to use a smaller and lighter cherrypicker for this part of the erection process.

The façade of the library will predominantly feature glazing, and one elevation – the west – features a 3.5m cantilever forming an architectural canopy. A row of glulam beams will be added to this façade, but these members, that will sit outside of the glazing line, will be purely architectural as only the steelwork supports the cantilever and the glazing.

The library will eventually be topped with a green sedum roof, helping the project gain its anticipated BREEAM ‘Very Good’ rating.

The Kent History and Library Centre is scheduled to open in early 2012. 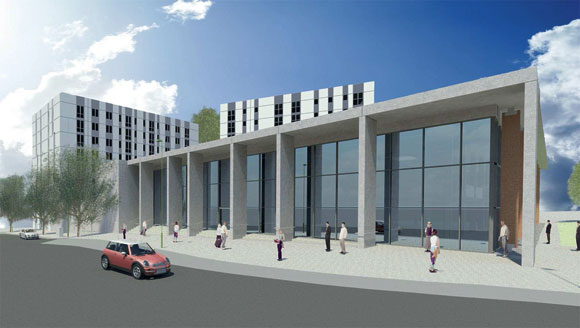