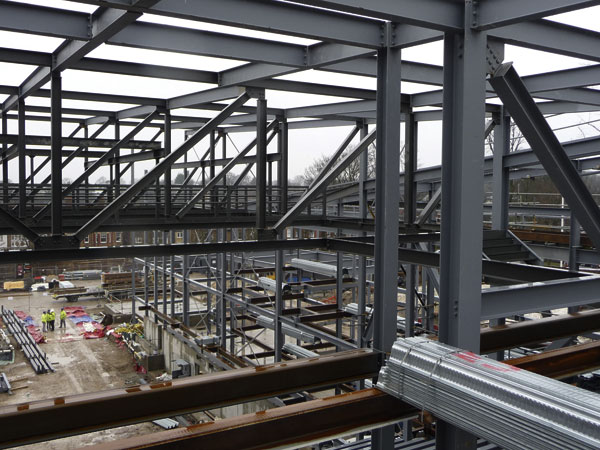 Construction work on Guildford’s new civic hall is on track for completion next year, with the majority of the project’s steelwork now erected.

The 1,700 capacity venue is a replacement for an older premises which stood on the same site and was demolished last year.

Steelwork contractor for the project is D A Green & Sons, and its contract requires the fabrication, supply and erection of approximately 640t of steel.

The project’s largest steelwork elements consist of a series of 22m long trusses which form the auditorium roof. Below this the venue has two levels of seating, a balcony and a ground floor which will include retractable seating.

“We’ve completed the structure’s main frame and metal decking on programme,” said Martin Futter, D A Green & Sons’ Contracts Director. “During August we will return to site for five weeks to erect the technical level, which is high level steelwork inside the auditorium for audio, lighting and stage systems.”

The new civic hall will host a mixed programme of rock concerts, classical music and theatre. It has been designed by architects Austin Smith Lord and the main contractor is Willmott Dixon.