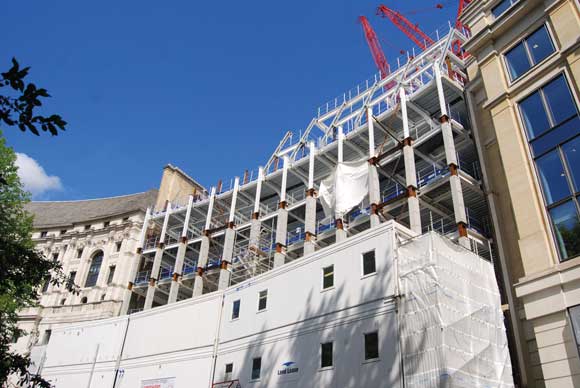 The building maximises the available space

A new commercial development on Finsbury Circus in the City of London has thrown-up a number of unique challenges, reports Martin Cooper.

Number 8 Finsbury Circus is on a plot previously occupied by River Plate House, which was demolished in 2013 to make way for this scheme. Built in the 1980s, the old building was deemed to be inefficient by today’s standards. With a large central atrium and off-centre core, little thought seems to have been given to maximising floor plates.

This is not the case with the new scheme, as it will offer 14,800m² of offices and 880m² of retail space. The development also accommodates two main entrances, one on Finsbury Circus and the other on South Place, which will be set within a retained 1920s façade.

With the exception of the retained façade, the creation of a new building was seen as the best way to give the client the modern office building required.

“After an in-depth appraisal of the site, it was decided that a completely new build as opposed to a renovation was the best way forward. This has allowed us to design a light-filled modern office that is sympathetic to its neighbouring buildings on the Circus,” explains Wilkinson Eyre Project Architect Sam Wright.

A steel framing solution with a centrally positioned core was then deemed to be the best way of achieving this design. A lightwell that adjoins one of the three party walls allows light to penetrate the structure’s upper floors where the building is at its deepest.

A nine-storey high metal artwork by renowned design studio Carpenter/Lowings will be hung in the lightwell when the project is nearing completion. The artwork will act as a reflector and help spread light into the floors below. 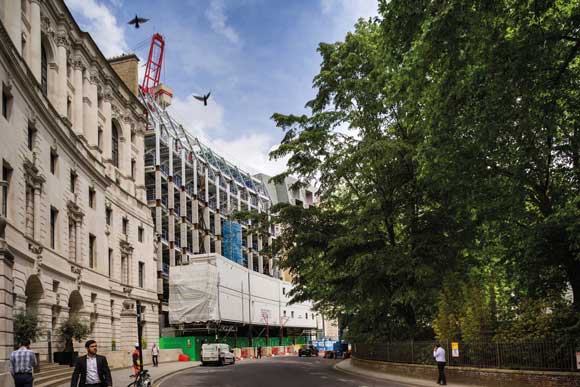 A modern structure has been seamlessly set into Finsbury Circus

“The design choice has also made the construction programme much quicker as steel erection and basement works have been able to progress simultaneously.”

Minimising the amount of time a project team spends on site is important and so are logistics. Any construction project in the City of London has to negotiate a raft of logistical challenges, ranging from traffic and access issues, through to noise and how to minimise it and keep the neighbours happy.

This project is no different as Lend Lease Project Director John Chesters explains: “We have a seven day a week programme, which means there are a number of periods when noise must be kept to a minimum to satisfy the neighbouring buildings that include a prestigious City hotel.”

The challenge of bringing materials to site, never an easy task at the best of times in the City, has been compounded by the fact that the Crossrail project team has occupied the centre of Finsbury Circus.

As they are excavating a major tunnel portal and have temporary offices in the Circus, Crossrail has precedence when it comes to traffic and this has meant that the majority of steel deliveries have had to be made via South Place.

“The delivery zone is opposite the hotel so we have to be as quiet as possible with our steel deliveries which are usually made early in the morning,” says William Hare Project Director Pat Egan.

The only exceptions to this delivery procedure have been the longest beams, which are up to 16.5m long. These sections are too big and too heavy to be unloaded at South Place and consequently special arrangements are made with the Crossrail team to allow them to be unloaded on Finsbury Circus.

“The structure’s longest spans are also along the Finsbury Circus elevation and so it makes logistical sense to deliver these beams in a way that negates lifting them over the entire structure,” adds Mr Egan.

William Hare began erecting steelwork earlier this year, once the centrally positioned and stability giving concrete core had been completed. 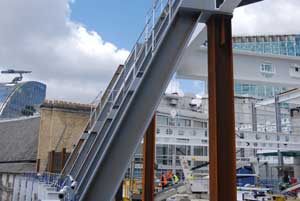 The structural steel frame begins in the two-storey deep basement. This area has been enlarged, as the basement area inherited from the previous building was not deep enough for the new structure that incorporates plant equipment on the lowest level and offices and retail on the lower ground level (basement).

The lower ground and ground floor slabs are constructed from insitu concrete, while from first floor upwards construction is a steel composite design with steel beams supporting a reinforced concrete slab cast on metal decking.

The ground floor concrete slab supports a service yard, and was cast in place early in the programme and this then allowed the team to carry on with the basement works below, while the steel frame was being erected above.

Using a variety of access platforms in conjunction with the site’s tower crane, the steel frame has required more than 2,600 individual crane lifts.

This high number of lifts correlates to the high piece count of steel members, which is necessary because of the shape and complexity of the structure.

To maximise the project footprint the structure is pentagonal-shaped, with an arced frontage along Finsbury Circus in keeping with the surrounding architecture. Because of this shape, the internal spans vary considerably, from 8m right up to 16.5m at the front.

Fabricated cellular beams have been used throughout to integrate the services and to help minimise the structural floor zone which in turn has helped fit-in the required number of floors without exceeding the height restriction.

As well as the complex shape, the steel frame’s design also incorporates three column changes on the first, fifth and eighth floors. On the two upper levels transfer structures have been inserted to accommodate steps in the Finsbury Circus elevation that accommodate outdoor terraces, while on the ground floor, another transfer structure helps make the entrance foyer larger.

Floors seven and eight also feature raking outer columns along their main elevations forming a mansard that helps the building to adhere to the rights-to-light requirements.

Another area of the building that has had to incorporate a column line change is the South Place elevation. On this part of the project, in order to prevent new steel columns clashing with the retained façade’s windows, column positions have been moved accordingly.

Interestingly, Lend Lease has meticulously removed the retained façade, that originally extending along most of the South Place elevation. Each Portland Stone block has been temporarily removed and stored safely offsite.

“It was decided that removing the four-storey high façade and then rebuilding it after the steel frame was complete was a safer and more efficient option than propping it up during the construction programme,” says Mr Chesters.