An exciting new headquarters building is bringing a new style of architecture to one of the UK’s busiest ports, as Margo Cole reports.

The Suffolk port of Felixstowe is a busy place, bustling with ferries, container ships and heavy goods vehicles. Like most ports, however, its buildings tend to be functional rather than decorative, and the only landmarks are the massive cranes and gantries at the quayside.

That situation is set to change later this year with the completion of a new headquarters building for two commercial shipping agents. “The client wants a building that stands out from everything in this area,” explains Peter Brightey, site manager for Jackson Construction, which is building the £6M office development. It is sited at the entrance to the main road into the port, and – it is hoped – will spearhead regeneration and high quality design.

London-based architect Colwyn Foulkes & Partners won a competition run by client – China Shipping (UK) Agency and Johnson Stevens Agencies – with its striking design for an open plan building with a total internal floor area of 3,931m². Among a wealth of innovative architectural features are a facade that features a large area of curtain walling with distinctive timber ‘brise soleil’ solar shading panels and copper cladding. 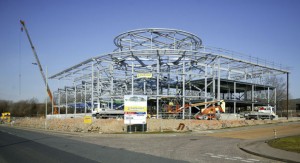 The structure is a steel framed L-shaped building 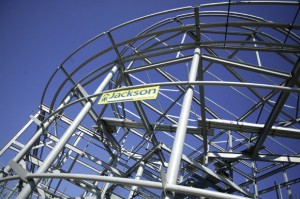 A circular boardroom sits on the roof level 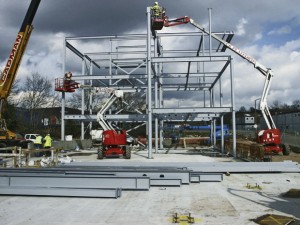 The second floor will feature a balcony 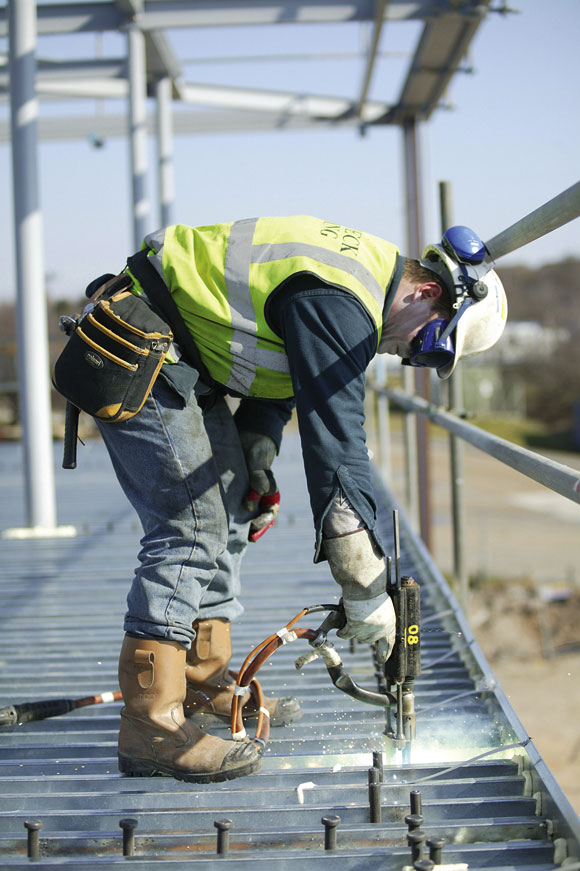 Traditional holding down bolt details have been utilised

The new building is L-shaped in plan, with a full height entrance atrium in the external corner and three floors of offices in the two wings. At roof level there is a plant deck and a circular drum- shaped boardroom.

The building’s structure consists of a steel frame supporting two composite steel and in situ concrete floors, topped with a roof that is made up of 300mm thick precast concrete slabs beneath the plant rooms and a standing seam roof at the front.

The architect’s design includes a curtain walled front facade, feature atrium and open plan offices, so much of the steelwork will be visible in the finished building. As a result many of the columns are circular steel sections, including all the columns on the front elevation and the single row of “spine” columns running the length of each office wing. This layout gives a typical bay size of 9m x 6m.

Structural engineer Price & Myers designed the structure and then passed the frame design onto Jackson Construction’s steelwork subcontractor DA Green. “In some ways it is quite a straightforward frame, but there were some challenges,” says DA Green’s Contracts Manager Ian Burchnall. These include an overhanging roof, a balcony at second floor level, and the curved steel of the boardroom “drum”, which is designed on a different curve from the atrium beneath.

The second floor balcony is created by stepping the wall in by 1500mm, resulting in the columns above – 139.7mm circular hollow sections – springing from the floor beams rather than sitting directly above the columns below. These columns support the roof, which includes a 3m cantilever overhang running the length of the front elevation.

“Only the corners of the roof overhang are propped,” explains Mr Burchnall. “The rest of the roof is cantilever steel. We had a depth limitation on the roof, so we couldn’t use deep hip beams.” The cantilever beams are 7.278m long, 254mm x 146mm universal beams sections, supported mainly by the main spine columns and the rear elevation columns.

Another rooftop challenge was the boardroom, a curved, fully glazed eyrie that provides spectacular views over the docks and the estuary beyond. “We used curved steel for the board room, but it has quite intricate geometry and is made up of a lot of small pieces. The structure is quite complicated, and we had to install radius beams to pick up the loading from the boardroom, because is it is on a different curve from the main frame,” says Mr Burchnall. As a result, the board room columns – extremely slender 114.3 mm circular hollow sections – spring directly from these cross beams.

The “drum” has been designed to give panoramic views, with nothing interrupting the glazing, so there was nowhere to put lateral bracing. Instead, all the bracing for the boardroom is provided through its roof structure, with loads taken right back to the lift and stair cores at the back. These cores – and a fire exit core at the end of each office wing – provide the main permanent bracing opportunities for the entire building, although temporary bracing was installed between the tubular front façade columns during construction.

“There are not many opportunities to get cross-bracing in the building because of all the windows,” explains Mr Burchnall. “Some of the columns are designed to be visible inside the building, so they are tubular. That means we had to fix the temporary bracing to circular tubes, so we devised a clamp system to do that.”

Most of the steel structure sits on the heavily reinforced ground slab, and utilises traditional holding down bolt details. However, the rear elevation steelwork and the structure around the lift cores and stairs sit directly on top of the concrete flood defence wall.

“We couldn’t break through the flood defence wall, so the bottom of the bracing had to sit on top of the wall,” explains Mr Burchnall. “It makes for interesting holding down bolt details – as do the base plates of the stair cores.” One such base plate detail in the stair cores area features a 615mm x 225mm plate with 12 bolt holes. This sits directly on top of the flood defence wall, with the column fixed to one end of the plate. Tolerances on the holding down bolts on the concrete wall are tighter than the more typical details on the floor slab.

The flood defence wall also had an impact on the erection of the frame, as Mr Burchnall explains: “We couldn’t put a crane within the footprint of the building because of the flood defences. It didn’t affect the frame design, but it required the expertise of our site supervisor and erection team, working with Jackson, to ensure access around the building and build sequence were coordinated successfully.”

Steel erection is now finished, and the building is almost weathertight. The timber that will form the striking brise soleil detail will arrive shortly, on time for the building to be completed – on schedule – in November.