Retirement leaves a hole in tubes 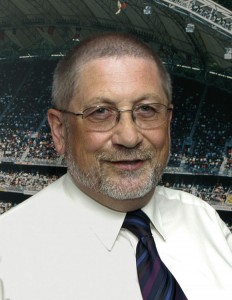 Eddie Hole of Corus Tubes who has been one of the best known faces on the tubular steelwork scene for many years has retired. He tells Nick Barrett how Tubes successfully battled to secure its place in the market.

One of the great structural engineering and architectural success stories of the past 50 years or so has been the widespread adoption of rolled hollow structural sections, or tubes. Tubular steel is a near ubiquitous feature of projects of all sizes today, from high profile stadia like Arsenal FC’s new Emirates Stadium, large transport related developments like T5 to local retail developments. It is hard to think of a notable structure that does not contain some element of tubular steelwork.

One man who has a close up view of the rapid development of much of the past 50 years is Eddie Hole, who has just retired from Corus Tubes after a working lifetime promoting hollow sections. As Manager, Technical Marketing, Eddie has had the closest contact with the market so has strong insights into what it is that designers appreciate most about tubular steelwork. Corus Tubes manufactures a wide range of products from tubes for sprinkler systems to very long span structures  and multi-storey buildings. They all have one thing in common – a hole down the middle; Eddie describes himself as the only hole in the history of tubes that can walk and talk.

Not so long ago the situation was very different. Hollow sections had been used during the heroic age of engineering, when engineers and architects first appreciated the potential structural and aesthetic benefits. But the square and rectangular hollow sections available had to be expensively shop fabricated by welding or jointing together structural plates and sections.

The key breakthrough came in 1959 when Stewarts & Lloyds introduced a range of hot rolled square and rectangular hollow sections (RHS). ‘That was what really freed up architects to express themselves structurally, ‘ says Eddie. ‘There were also developments in jointing technology which together meant that structural engineers and steelwork fabricators could support the new enthusiasm of architects. Tubes have enabled architects to do what they want, rather than just dream about it.’

Eddie was still at school in 1959, and only joined Stewarts & Lloyds in January 1970, at which time there was still a lot of work to be done to promote RHS to a sceptical market. He started his working life however with the London Electricity Board in 1962 as a draughtsman. He then started training as an electrical engineer until 1966 when he became a design engineer with British Insulated Callenders Construction, better remembered perhaps as simply BICC.

Eddie recalls:’I was happy with the LEB but I never felt that I really had the science aptitude that the best electrical engineers had, so I moved into construction and never looked back.’ The decision was a good one as he gained Chartered status of the Institution of Structural Engineers at the age of 25 in 1970, after taking the ‘long route up’ as he calls it of ONC, HNC, endorsements and finally a seven hour I StructE examination paper.‘I passed all the exams and other requirements when I was 23 but I had to wait until my 25th birthday to gain membership under I StructE rules.’ 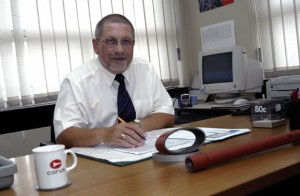 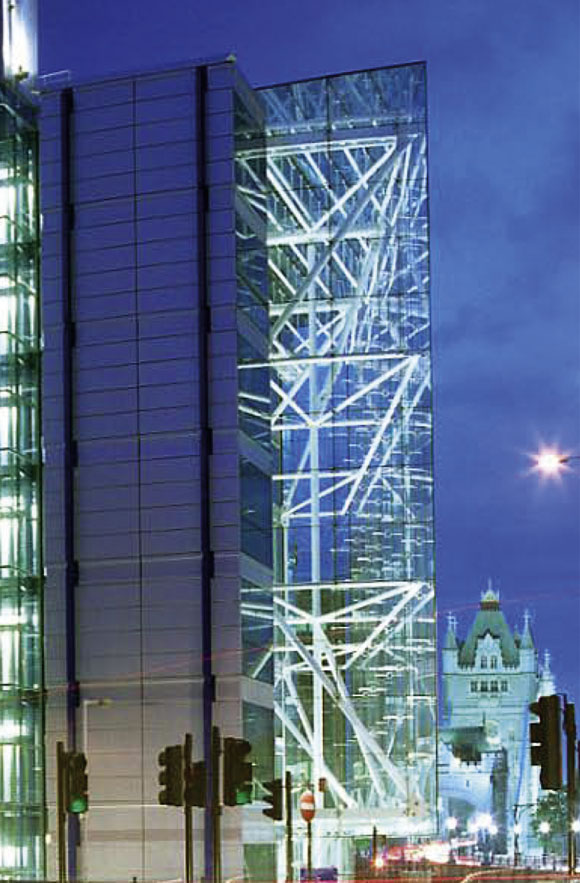 The organisation he works for has changed its name a few times over the years, from Stewarts & Lloyds into British Steel Corporation – Tubes Division, then British Steel Plc Tubes & Pipes and now Corus Tubes. Throughout that time though – 36 years – he has been involved with the Technical Marketing of Structural hollow sections into the areas of construction, highways engineering and general engineering.

The battle to promote tubes to the market was initially hard, but one that stands as an example to any other construction product manufacturer. ‘It was a crusade to get people to use tubes. In the early days we had to tell people that there even was such a thing as a hollow section available. People did not know how to design or detail tube. Fabricators were wary of the amount of welding they thought they would have to do. It can be fabricated just like any other product, but some people took a lot of convincing.’

There was no dramatic breakthrough says Eddie, just a gradual acceptance after a lot of effort over a number of years. ‘People like to see things used and don’t want to be the first to do something new. Construction is a conservative industry. But architects saw the potential first and pushed for it.’ Architects like the clean lines and the aesthetics of circular profiles. ‘It appears as the same dimensions wherever you look at it from,’ says Eddie. ‘With the software design packages available today you can practically build anything you can draw. Architects can still challenge us with their designs, which is a good thing.’

One early marketing effort was the establishment of Tubewrights by Stewarts & Lloyds in 1939 to pioneer the use of hollow sections. The company grew to be a noted steel fabricator and structural engineering contractor, spreading the tubes message worldwide.

‘Tubewrights removed all the myths,’ says Eddie. ‘They showed that tube was as easy to use as anything else.’ Tubewrights was eventually shut down after management decided that the point had been proven. ‘We were in a different era,’ remembers Eddie. ‘Marketing switched to providing technical advice to fabricators and structural engineers. We had our own welders who trained the fabricators welders and we had two design offices. We did all we could to make it as easy as possible for people to use tubes.’

Milestone projects included the National Exhibition Centre at Birmingham which was a proving ground for the Nodus system, a new way of approaching design of two dimensional space structures. Another was the Jumbo jet hangars at Heathrow. The Fort Regent Leisure centre on Jersey, one of the first single layer circular parabolic domes made in hollow sections, was another.

Getting a new mill at Corby in the late 1970’s was a big help. Tubes today supplies about 350,000t a year to the UK construction market. ‘That ranges from non load bearing uses to structural use for the biggest and tallest structures in the country.’

‘I would like to see even more tube used in structures,’ says Eddie. ‘It is still not always used to its best advantage even though it is a fairy mature product in the UK. We have trailblazed the use of tubes in the UK so it might be hard to increase our market here much in percentage terms, but overseas there is still a long way to go. We have shown the world how to do it but we have to keep up the education effort and maintain the technical back up and research and development service.’

Future research areas might include seismic connections, new methods of connection, like using adhesives for example. Corus Tubes’ commitment to R&D and new products development can be seen in the launch last year of the Celsius 355 Ovals range.

Regrets about leaving his working days behind? Some, but not too many. ‘I have loved the job and have been a strong supporter of Tubes for many years. I will miss a lot of the working relationships but it is time to step aside and let some new blood in. What has worked in the past might not work in the future so it is a good idea to have some fresh input, new ideas and enthusiasm.’