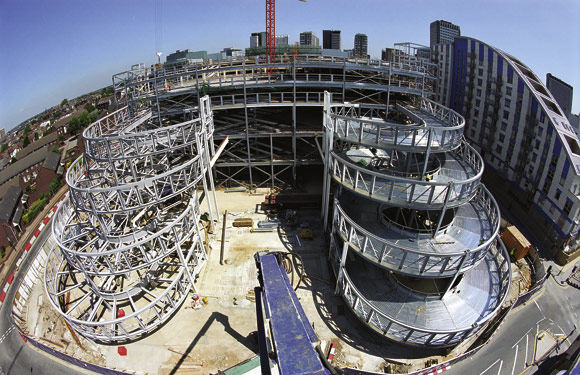 The most challenging aspect of the car park at the new Croydon Centrale shopping centre was the problem of giving cars access on a constricted site. The design solution was an unusual arrangement of spiral ramps. David Fowler reports.

Croydon Centrale is the busy Surrey town’s newest shopping complex, a £100M development by St Martins Property Corporation that was built partly on the site of the former C&A retail unit. But with three levels of parking for 1,100 cars above three levels of malls, and a constricted street layout around the outside of the centre, fitting in the car park access ramps caused headaches for the design team.

The design went through several stages of evolution before the final stepped spiral ramps were chosen, a solution which probably could not have been designed or built without 3D CAD systems.

Architect John Clark Associates initially considered two spiral ramps on the rear elevation of the shopping centre, on an island site separated frm the centre by a road, with a bridge at the top over to the car park at Upper Mall level. Local planners considered that the ramps would overshadow a row of houses behind the centre, and wanted a feature archtietectural solution. 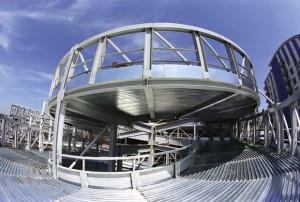 A curved truss runs around the outside of the ramps 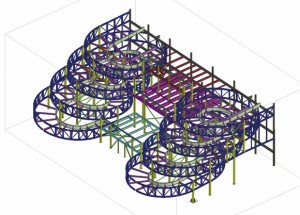 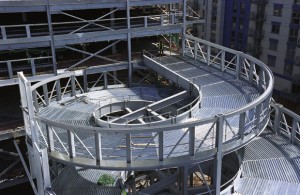 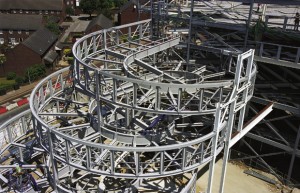 This led to the solution of stepping the ramps back towards the centre and away from the houses as they rise. The stepped geometry is achieved by adding one elongated side to the ramps, which are otherwise circular in plan; there are three and a half revolutions from the base of the ramp to the first car parking level.

This solution was adopted and work progressed on the structural design. Initially the offset between levels was such that vertical supports could not be fitted in because the roadway beneath would have been in the way. Instead, a large and complex sloping cantilevered spine beam in the central void of the ramps was proposed. Secondary beams cantilevering from the spine beam would support the roadway ramps.

Though this arrangement went out to tender with the rest of the steelwork on the project, the cost of the spine beam led to a rethink. “We made it work as a design, but it would have been expensive, and because it was cantilevered it would have needed a huge foundation block,” says Edwin Bergbaum, Senior Associate Director of structural engineer Waterman Partnership.

So the ramp geometry was modified to allow columns to be fitted in on both the inside and outside circumferences, at least at each quadrant point. In the final alignment, the ramps have an outer radius of 10m and an inner one of 5..5m. Steel and concrete were both considered as construction materials, but the complex geometry made steel a hands down winner.

Structurally, a curved perimeter truss on the outside of the spiral spans between columns at quarter points. Around the inner radius a plate girder is used. Radial beams span from inside to outside to support the road deck.

For the roadway precast and insitu concrete were considered before deciding on metal decking acting as permanent formwork to an insitu slab. Because the ramps slope at one in 14, with a cross-fall of 1 in 20, the roadway is significantly warped, which would have made a precast solution too expensive. Metal decking was flexible enough to follow the correct profile naturally once laid on the supporting steelwork, says Bergbaum. The decking is not, however, designed to act compositely with the 200mm concrete slab.

Much consideration was given to the orientation of the metal decking to give the most pleasing appearance when seen from below.

The structure was modelled in three dimensions using the Integer Superstress analysis program, starting with a quadrant on four supports and progressing to the whole structure. Design drawings were produced using CDC’s 3D+.

“I’ve spoken to some of our senior draughtsmen,” says Bergbaum, “and no-one is sure how you’d have drawn it on a board in two dimensions.”

Severfield-Reeve Structures was appointed steelwork contractor for the project as a whole, but subcontracted the ramps to Watson Steel Structures Ltd. After further development of the design and slight modifications, Watson Steel produced its fabrication drawings using Xsteel.

Because the ramp erection was on the critical path at the end of the steelwork contract, the unusual nature of the structure, and the fact that the ramps were needed to provide access for some of the following trades, a trial erection was undertaken at Watson’s works.

Mr Bergbaum says: “We wanted to understand how the structure would deflect while being erected, and to make sure the design was what everyone wanted. It allowed  the cladders to see what they would be cladding, and the client to see the soffit.’ He adds that the trial went very well; on site, erection went “like a dream”.

The car park is now in use, but with cladding to the sides of the spiral now in place, little of the structure is visible to the casual observer. So although drivers could hardly fail to notice the unusual geometry of the ramps, the chances are that few have any inkling of the ingenuity which went into building them. 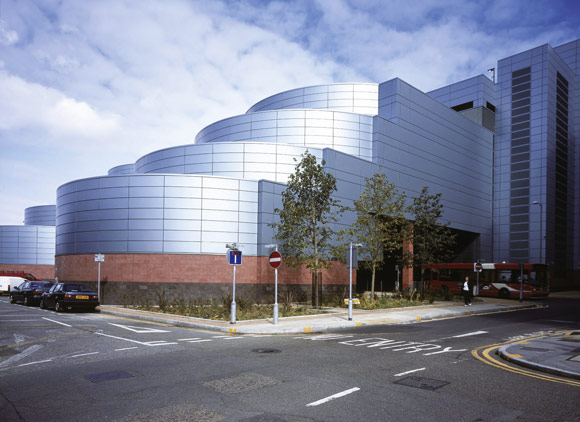 The finished ramps with the cladding in place

The new centre is steel-framed, and on the upper floors universal columns, used as edge beams, are left exposed as an architectural detail. The ends of the transverse floor beams are tapered to create a soffit which curves upwards at each edge.

Columns are arranged on an 8m grid except for the main House of Fraser store, the anchor store for the development in retailing parlance. Here a wider grid was called for. It was achieved by leaving alternate columns out to create an 11.3m grid at 45degrees, though this complicated the steelwork layout where the two grids met.

Because ground level varies considerably around the site, it was more convenient to support part of the upper mall level from above rather than support it from below.

At the main entrance the floors cantilever out to support escalators positioned behind a three-storey high glazed facade.

The centre opened in stages starting in autumn 2004.