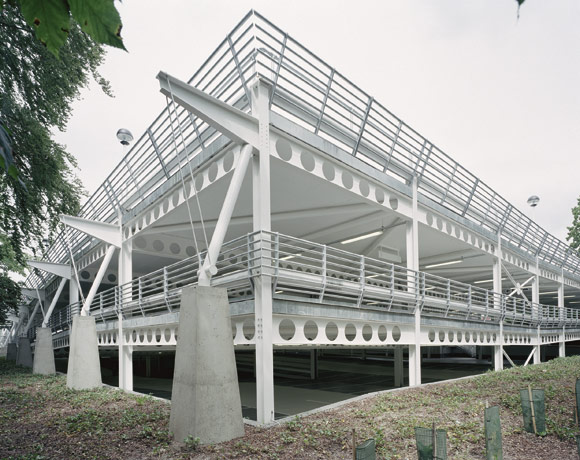 Developers are making statements with their new car parks, and the statement is increasingly ‘do it in steel’. Car park design specialist Hill Cannon predicts that more aesthetically pleasing, easy to use car parks will be made possible by steel.

Once car parks were hidden round the back of a development and forgotten. Recently developers’ attitudes have begun to change; clients no longer go for the cheapest structure possible. It is one of a number of reasons why more car parks are being built in steel nowadays.

Historically, car parks were regarded as low value structures. “It used to be thought, ‘it’s only a car park – it doesn’t matter. Now car parks are considered much more ‘front of house’. People are not prepared to tolerate an unmaintained car park anymore – they look for a safe, secure and easy to use facility. In a shopping centre, for instance, developers are realising that parking forms part of the overall experience,” says Christopher Whapples, Senior Partner of consultant Hill Cannon. 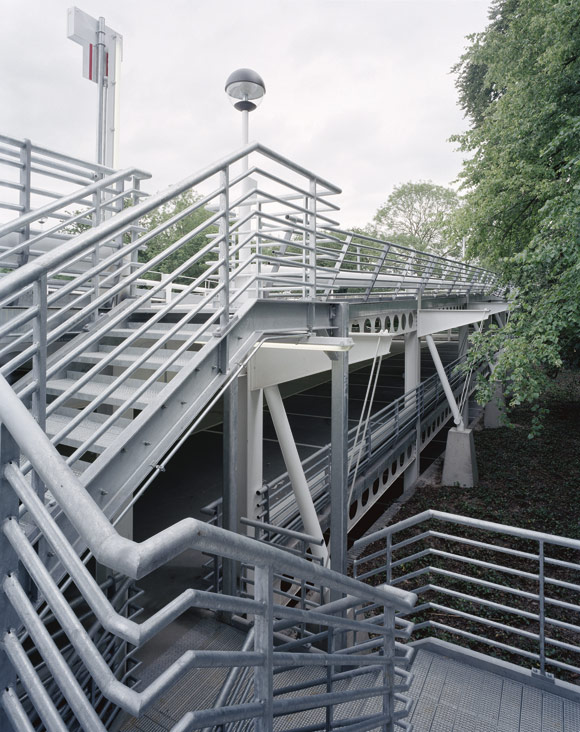 The practice has made car park design in all materials a speciality since 1967, and, though it undertakes other work, car parks form about half the company’s workload. Along the way the firm developed and patented its Vertical Circulation Module (VCM) system which provides a space-efficient ramp layout and minimises the length of steep ramps, improving pedestrian access to the whole deck.

“At one time the majority of car parks were in situ-concrete,” says Mr Whapples. “Then  the market went towards precast because of risks from labour shortages and weather.”

There have been examples of steel car parks since the late 1960s, but until recently fire regulations prevented steel being used for structures over 15m or five storeys. That requirement has been relaxed because of a better understanding of how fires spread in car parks. If a vehicle catches alight, the blaze tends to remain localised rather than spreading to adjacent cars, as had originally been assumed. At the same time, intumescent paint has become more affordable.

A significant landmark was Gateshead’s Metro Centre, which at the time it was built in the mid 1980s was the UK’s biggest shopping mall. Hill Cannon was brought in by steelwork contractor Conder as consultant on the parking structures, which were built in steel because the whole of the rest of the development was steel. But now other trends favour steel.

Mr Whapples adds: “With steel, rather than cladding the structure as is normal with concrete, steel tends to be used architecturally, making a feature of items such as the vehicle impact barriers. You get a more honest building that looks like a steel-framed car park, rather than being hidden behind brickwork.”

Typical of the new philosophy is the parking structure designed by Hill Cannon as part of a joint venture with main contractor Makers and Conder Structuresand built for a pharmaceutical company in Amersham in 2003, for which Conder was again the steelwork contractor. There are three storeys, the bottom one , the lower level being partially below ground and with the decks coated at every level. Nautical-style handrails are used around the deck edges. Columns are on a 7.2m grid with tubular impact barriers spanning between them. The use of cellular beams to support the decks gives the impression of a higher ceiling, creating a much lighter and airier structure. The car park was commended in the 2003 British Parking Awards.

A car park now under construction by Amec at Norwich is replacing a concrete structure. Using the VCM system, a similar number of spaces has been engineered to fit into a smaller area, liberating land for housing. Steelwork contractor was Quantrill Steel.

A future trend will be to create more space on surface car parks by adding extra decks. Again, steel is well-placed to do this quickly and with minimum disruption. Hill Cannon is working on an interlocking precast deck system which would eliminate the need to use wet trades, and speed up construction even more.

Another likely development is to open up column spaces beyond the norm of 7.2m, equivalent to three vehicle widths, as used at Amersham. “With steel you could go to 16m,“ says Mr Wilford. “The ideal would be a column-free space with a column at each corner and a truss spanning between them. Typically, there’s a  tubular impact barrier, a steel tie beam and the handrail. If you designed those elements as a truss you could open up the spans.”

Hill Cannon is not only a car parking specialist but is involved in many other projects, using steel when possible. When car dealer Ringways Ford decided to redevelop its Leeds site it decided that a dramatic structure (left) should be built on the prominent ring road site.

The enthusiasm of client and architect provided an opportunity for Hill Cannon, as structural engineer, to create a striking and innovative design. “We always try to be innovative,” says Hill Cannon partner Mike Wilford. “Good, well thought-out design does not have to cost a fortune.”

The key requirement was for a column-free showroom (pictured left); beyond that, Hill Cannon and architect Archtiectural Design Services were given a relatively open brief.

The solution uses curved space frames (third from left), spanning 12m on to elliptical tubular columns. The longitudinal axis of each column was set parallel to the space frames and curtain walling mullions (right). This has aesthetic advantages, says Senior Engineer Dave Topping. “From inside the building you see the ellipse. Externally you see a very slender section. Because the columns and trusses are parallel with the window mullions, from outside you don’t see the column, giving maximum visibility.”

The corner columns are set back from the facade so that the external full-height glazing can meet at a point.

For connections between the structural members, end plates with visible bolts were avoided – instead connections were concealed where possible. Bracing is concealed within the roof space.

For the smaller commercial vehicle showroom adjoining the main car showroom, a more functional approach was adopted, using standard cellular roof beams, though again the bracing is concealed. Mezzanine offices and a stair core are situated at the back of the building.

Between the two showrooms, facing on to the forecourt, is a GRP canopy supported on three slender, circular columns, one raking. This is where new cars are handed over to customers. The canopy required very tight tolerances in the steelwork and accurate setting out, to allow the GRP to be prefabricated. This was achieved successfully despite the fact that the columns are cantilevering over 11m. “It shows the precision you can achieve with steel,” says Mr Topping.