‘Can of Ham’ tower to start soon 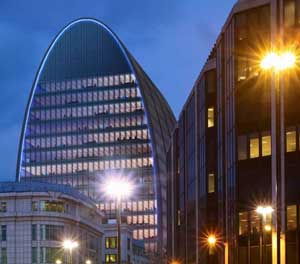 The much delayed City of London office building dubbed the ‘Can of Ham’ is being resurrected and according to sources will start onsite this summer – more than six years after Foggo Associates was given planning permission.

Mace has been appointed to build the steel-framed 90m-tall skyscraper at 60-70 St Mary Axe. The structure will consist of 24 floors of office space with a ground floor retail zone.

The ‘Can of Ham’ so called because of its distinctive curved shape that is said to resemble a tin of meatstuff will be a glazed building designed to be extremely energy efficient.

Vertical shading fins to the curved façades and glazed double wall cladding to the end elevations will reduce solar heat gains to the offices.

Other low energy measures, such as borehole thermal energy storage, will result in a structure with very low carbon emissions.