50 Years Ago: Steelwork for 150-ft bridge is erected in one weekend 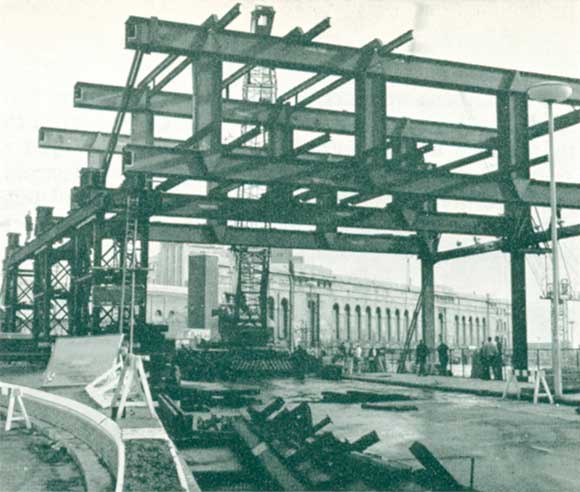 The first three half-girders in position

From Building with Steel May 1962

The bridge will form a link between two sections of the £5 million Birmingham Bull Ring project – the largest air-conditioned multi-level shopping centre in Europe, due for completion by late 1963.

Erection was carried out by teams of steelwork erectors working in relays to a carefully timed hour-by-hour construction schedule. Work began at 8pm on Saturday 7 October. Working through the night, the steel erectors had the first main girder in position by 11pm and five other girders were erected in position by 6am on Monday 9 October – before the traffic began to flow again in the busy street. 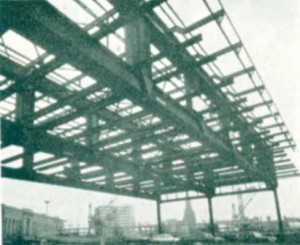 This photo and below: Two views of the full span of the bridge

The main bridge beams are formed by three Vierendeel steel girders, 150 ft long, 17 ft 9 in high and 3ft wide, each weighing over 100 tons. The girders were delivered in halves and hoisted into parallel positions, three above each carriageway of the road. They are supported at either end by steel stanchions founded on reinforced concrete, each pair of half girders meeting at the centre line of the bridge on temporary trestles and supporting structures which were later removed to give the 150-ft clear span.

The inner ring road links the sites of the planned department store block adjoining the New Street Station and the main part of the multi-level shopping centre. The new bridge will eventually be build into the new buildings on either side of the inner ring road and will accommodate a covered shopping mall joining the two parts of the scheme. A similar steel frame for a second bridge in the Bull Ring project was built in April over the southern carriageway of the Ring Road at the Bull Ring end of the old Market Hall site.

The bridge was designed by the chief civil engineer’s department of John Laing and Son Limited, in conjunction with Septimus Willis and Associates, Consulting Engineers.