Designers using the old Yellow Book guidelines may have been led to be more conservative than needed. SCI’s Manager for Fire Engineering, Gerald Newman, describes efforts to develop better methods for predicting the required thickness of an intumescent coating for cellular beams.

Beams with web openings, including traditional castellated beams, cellular beams with circular openings, and beams with multiple openings of varying size and shape have traditionally been fire protected using the guidance given in the “Yellow Book”, Fire protection for structural steel in buildings(1). This gives an empirical rule for calculating the passive fire protection thickness to be applied to castellated and cellular beams, in which the thickness required for the solid parent beam is increased by 20% in recognition of the fact that beams with multiple, closely spaced holes have been found to heat up at a slightly faster rate than solid beams. The limited tests from which this conclusion was drawn were carried out on loaded castellated beams protected with board and spray-applied fire protection materials.

The Yellow Book states that the rule applies to passive fire protection materials and that no general guidance is available for active (intumescent) materials. However, because no other guidance was available, the rule was widely applied to perforated or cellular beams protected using intumescent coatings.

During 2001 and 2002, the Steel Construction Institute (SCI) was involved in the development a fire engineering solution for a beam with web openings protected with an intumescent coating. It became apparent during the testing which accompanied this development that the Yellow Book guidance for beams with web openings was probably unconservative in a great many cases. It was observed that a narrow web post-heated up at a faster rate than a solid area of web and the beam could fail prematurely because of web post instability. The increase in temperature was inversely proportional to the width of the web posts, i.e. narrow web posts suffered the greatest rise in temperature.

In 2003, further tests on cellular beams protected with intumescent coatings were performed. These showed the same trend previously observed. However, in a test on an unprotected cellular beam, no increase in web post temperature was observed. This test indicated that the phenomenon was related to the properties of the intumescent coating. Careful observation is difficult in a fire resistance test because of the high temperatures within the furnace but it is likely that the increase in temperature was occurring because the coating was being either eroded from the edge of an opening or was shrinking away from the edges.

Nevertheless, the SCI recognised that this was not the end of the matter. The guidance in the Advisory Desk Note had been developed mainly on the basis of fire testing using a single material and there was some concern that it was product specific. As a consequence of this, The Association for Specialist Fire Protection (ASFP), the representative body for fire protection manufacturers and applicators, set up a group to develop a general fire test protocol for cellular beams protected with intumescent coatings. The working group incorporated members from the ASFP, SCI, Corus, Warrington Fire Research Centre, BRE and two leading intumescent coating manufacturers. A protocol has now been produced  and to date two companies have had products tested to this and assessed; others are expected to follow. 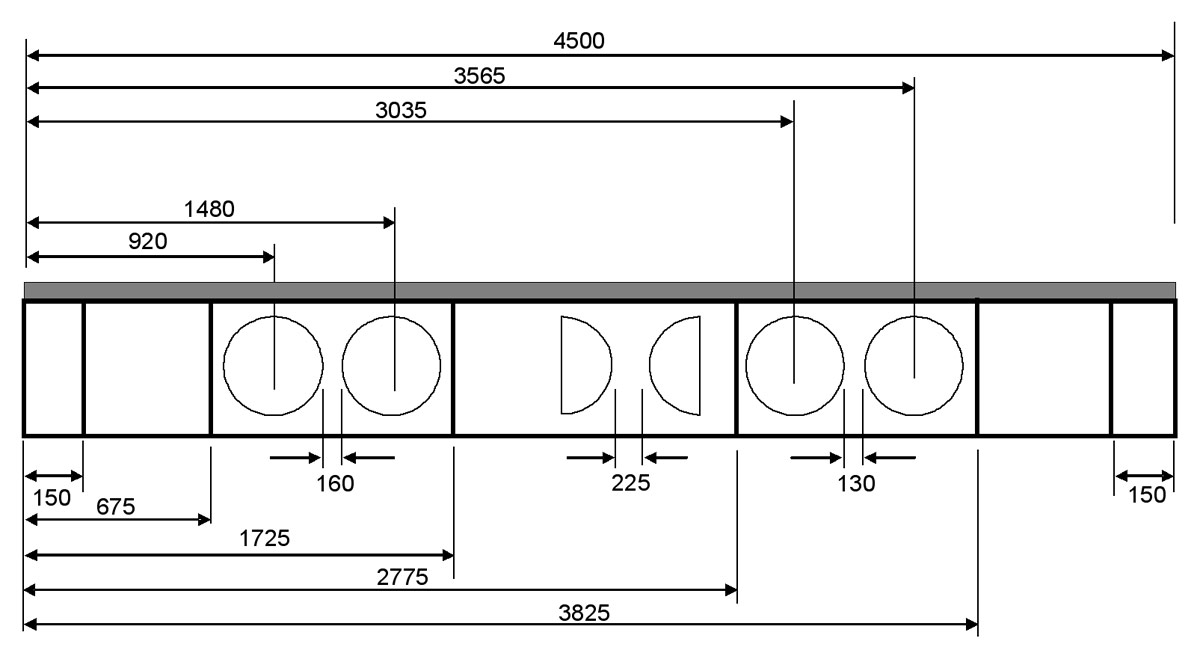 Figure 1: Schematic of the loaded beam

The new test protocol includes a fire test on a loaded beam spanning 4.2m and a number of short unloaded specimens to gather thermal data on other web post geometries. All the test beams have a number of openings and a variety of web post widths. The loaded beam geometry is shown in Figure 1. 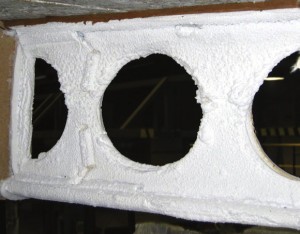 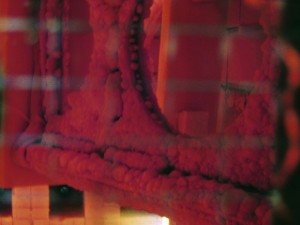 The assessment of the thermal performance of each product is carried out by the test laboratory (Warrington or BRE). SCI then carries out a structural assessment and produces design tables. These tables are similar to the generic tables in AD269 and RT983 but are specific to a particular product.

Early indications are that some of the generic information published by SCI in RT983 may be conservative. It is clear that web posts appear not to get quite as hot as SCI originally predicted.

However, some of these gains are lost because the thickness of intumescent needed to maintain these higher beam temperatures may be greater than the generic values used by SCI. In any case, it is clear that different intumescent coatings behave slightly differently.

During the next few months one can expect to see assessments using the ASFP/SCI protocol produced for many products. On occasions, specifiers may find that some suppliers of intumescent coatings are not using the new protocol, but instead are relying on the old Yellow Book 20% rule.

Although for some intumescent coatings, this may be appropriate, specifiers should be aware that the use of this rule, without supporting evidence, is not supported by SCI, ASFP or permitted by BS5950-8(3).