An introduction to site connections 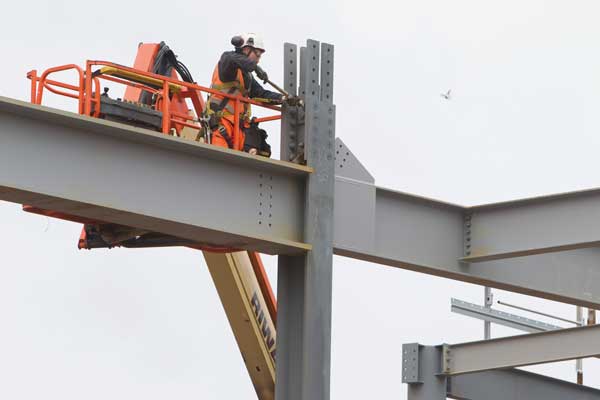 The fabrication and erection of steel structures involves the joining together of various steel members and the two principal methods used are welding and bolting. Welding is normally used in the factory but site connections should generally be bolted, as it is faster, less susceptible to poor weather conditions, and has less onerous access and inspection requirements than site welding.

For structures that are bolted together there are two types of system which are generally used – ‘non-preloadable assemblies’ and ‘preloadable’ assemblies.

Non-preloadable assemblies are perfectly satisfactory for the majority of orthodox connections, as the small amount of slip associated with clearance holes has no practical consequences for the structure. There are circumstances where the use of preloadable assemblies should be considered including: where slip must be avoided, fatigue, vibration and load reversal.

Bolting regulation and standards
Both systems are covered by a series of European standards. The biggest change from the old British Standards is that the European system applies to bolting assemblies (bolts, nuts and washers) rather than the individual components that make up a fastener. 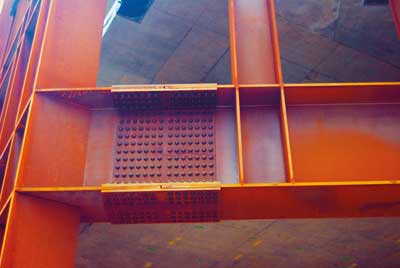 BS EN 15048 is not a complete product standard. It complements standards such as the BS EN ISO series of standards for fasteners by providing the testing and Factory Product Control (FPC) requirements necessary for the manufacture of bolting assemblies to be CE Marked.

The BS EN 14399 series of standards covers the two types of preloadable assemblies used in Europe – the HR and HV systems. For the HR system the nut thickness is 90% of the bolt diameter which effectively makes system HR assemblies dimensionally identical to the old BS 4395 fasteners.

Current practice
Structural bolting practice (for buildings) in the UK is based predominantly on property class 4.6 and 8.8 non-preloaded bolts to BS EN 15048, generally used in 2mm clearance holes. The recommended option of M20 8.8 fully threaded bolts is readily available. Property class 4.6 bolts are generally used only for fixing lighter components such as purlins or sheeting rails, when 12mm or 16mm bolts may be adopted.

There may be situations, for example a column splice subjected to large load reversals in a braced bay, where the designer considers that joint slip is unacceptable. In these cases property Class 8.8 preloaded bolts to BS EN 14399 should be used. Preloaded bolts are also predominantly used on bridgeworks. Generally, only system HR bolts are used in the UK, as recommended in the National Structural Steelwork Specification.

Design considerations
Bolts are discussed in the SCI publication Design for Manufacture Guidelines (P150), from which the following points are taken:

Although there are potential minor extra manufacturing costs due to an increase in the average bolt length and a need for more threading, significant overall savings are possible when standard, fully threaded bolts are used: