All change at St Pancras

The new extension was designed to be subservi- ent and complementary to the original structure.

The £800M redevelopment of St Pancras Station not only involved the construction of a new extension, but also the restoration of the famous Barlow shed’s wrought ironwork, which has been in place since the structure opened in 1868.

The completed construction work at London’s St Pancras Station has seen an architectural restoration and expansion of a unique London landmark. As of last year, Eurostar trains, bound for Paris and Brussels, as well as Midland domestic services, now arrive and depart from the fully reglazed, repainted and extended Barlow train shed. 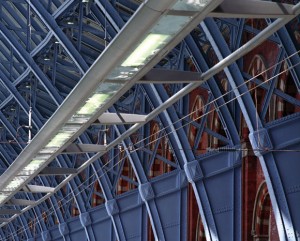 The majority of the Barlow shed’s ironwork was in good condition and just needed repainting.

Located behind the impressive Gothic station frontage, which formerly housed the Midland Hotel, the Barlow train shed is a spectacular feat of Victorian engineering and even held the world record for the largest enclosed space for many years during the nineteenth century.

The engineer behind this architectural masterpiece was the Midland Railway Company’s Engineer in Chief William Barlow. He oversaw the construction of the train shed which features a 210m-long and 30.4m high roof with a span of more than 74m. The arch was fabricated and erected in 1868 by Butterley Engineering. Another interesting Victorian record is the fact that the clear span wasn’t surpassed for another 30 years, making it the world’s widest for most of the era.

Structurally the shed is a tied arch, with a row of 46 huge iron girders (ribs) running the width of the station. The arch is not a smooth curve as it rises to a point. Aesthetically pleasing to look at, this feature does reduce the outward thrust of the arch.

All of this adds up to a tough structure, which was hit several times by bombs during both World Wars. The story goes that the railway authorities simply patched the shed up each time and services carried on pretty much as normal.

Any old iron
The massive restoration of the shed entailed clean- ing and repairing the arch’s wrought ironwork above a huge arched scaffold and platform. As well as re- glazing the structure, the paint work has been taken back to its intended pale sky blue. In keeping with modern sustainable and environmental procedures, the building has been restored by recycling the brick work from the original structure or getting clay from the nineteenth century source in the Midlands to make new replica bricks.

The roof has been totally restored to its pre- World War II condition with ridge and furrow glazing (14,080 glass panels in total) over the crown and 300,000 handcrafted Welsh slates over the remainder. The glazing was an enormous undertaking and covers an area of 10,000m2, which is almost equal to two full-size football pitches. 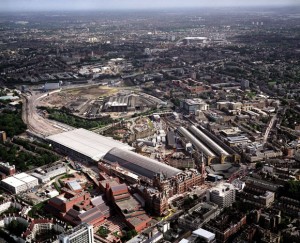 The St Pancras redevelopment is one
of the initial phases of a much larger regeneration programme.

Ben Ruse, Head of Media for St Pancras Inter- national, says there were two areas of the arch, in particular, which needed a lot of repair work. This involved new steel being welded into areas were the wrought-ironwork had corroded badly.

“The north gable, as it is exposed, had suffered from quite a lot of corrosion, but as the arch was re- painted no-one can now see the welds between new steel and old iron.”

The other area which required some time-con- suming repair work was below ground on the ‘iron boots’ which support the 46 ribs, which form the arch. These large chunks of iron had been repaired many times over the years and even had concrete inserted in places where corrosion had set in.

“All concrete was scraped out and we again re- paired the ironwork with new steel, before painting,” adds Mr Ruse.

Under the giant shed, the platform structure has been substantially altered. The Victorian platforms and track were originally supported by 800 wrought- iron columns and a grillage of wrought-iron beams. Eurostar trains now enter at the same level, but on a new heavily reinforced concrete trackbed.

Numerous escalator and light wells have been cut out of the wrought-iron structure to connect the two new levels and whereas the grillage of beams has become redundant, most of the original columns were in good condition and remain to support the new trackbed, albeit with bearings added to their tops to take into account movement from above and the extra weight of modern day rolling stock.

Below the tracks, in what was originally an under- croft for beer storage and more recently a network of small businesses, is now the arrivals hall with ticket and passport control. 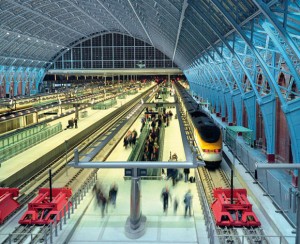 Mr Ruse says the wrought ironwork below ground was in a remarkably good condition after nearly 150 years. “The columns are pristine, but nobody knows how they were made, though it is known that rope, tree trunks and horse urine were involved. We don’t know what the urine did, but the theory was it made them harder and long-lasting.”

Although the theory lacks any scientific proof, the fact that the columns are still in use certainly gives some credence to this, archaic and equine, Victorian procedure.

Victorian heritage
One thought as to why there was such a huge out- lay on the vast train shed was that it would allow internal flexibility, although, in fact, the position of the tracks and platforms remained unchanged until it closed in the 1990s. But now Barlow’s concept has been fully justified, as the single span has allowed the internal space to be rearranged and the iron- columned basement – designed on a module of Burton beer barrels – partly hollowed out for Eurostar facilities, while a new flat-roofed shed extension has been tactfully added on.

Watson Steel Structures erected the new extension and the options for this were either to extend the station roof matching the geometry of the Barlow arch, or to go for something that does not chal- lenge the old structure.

As no original detailed plans remain of the Bar- low shed, it was decided to build an extension that was considerably wider that the existing station, but subservient to the older structure.