Posted on May 1, 2012 by NSC in Projects and Features, This month's featured stories 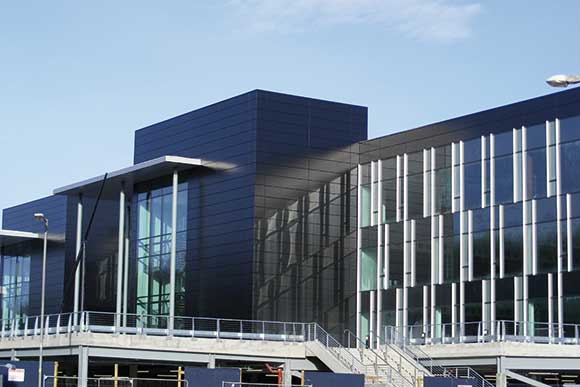 Sustainable buildings completed with sustainable construction methods are now the norm for many sectors. Energy efficient carbon neutral buildings are the way forward in an environmentally aware society and one commercial development in Scotland has led the way in this respect.

The business park is 13 miles south east of Glasgow on the A725 and is already well established, accommodating over 60 companies employing in excess of 6,300 staff which is set to rise to over 9,000 in the near future.

Close to the M77 and M8 motorways, the park also benefits from excellent public transport links, all of which have contributed towards EcoCampus’ sustainability.

The project has already achieved a BREEAM ‘Excellent’ rating, also helped by the fact that the development will benefit from its own dedicated windfarm, providing all of its electricity needs. The developer, HFD Group, says that the EcoCampus is the first Grade A carbon neutral speculative office development in the UK. 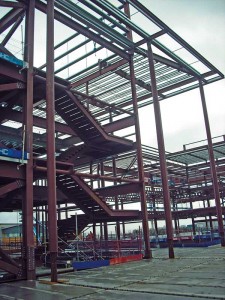 Structural steelwork has been used as the framing material for each of the three blocks, with steel’s recyclability further contributing to the projects sustainability credentials. The steelwork frame begins at basement level, forming a two level subterranean car park which covers the entire site’s footprint. Above this there is a podium level, on top of which sit the three office buildings.

For the basement car park and podium deck the steelwork is supporting precast planks on an 8.1m × 8.1m grid pattern. Above in the office areas, the grid increases to a 16.2m × 8.1m grid pattern, still giving the buildings the desired open plan spaces. For the office accommodation the steelwork construction method changes slightly as the floor slabs are constructed with metal decking.

“Steel was the obvious choice for the project’s framing material as it gave us the required spans and layout,” comments Colin Morrison, URS Associate.

Known as Carrick House (C), Dunlee House (D) and Edzell House (E), the offices are of similar design offering 6,935m², 5,995m² and 7,908m² of floorspace respectively. Each structure has two steel braced cores, giving the structures their overall stability. Glazing features dominantly along all of the project’s elevations, so bracing could not be located and installed in these areas, consequently it has been secreted in some internal areas around the cores.

A lack of internal bracing in some areas meant temporary bracing had to be installed in many zones during the erection programme. This was only removed once the concrete decks were completed, thus providing the required diaphragm action and structural stability. 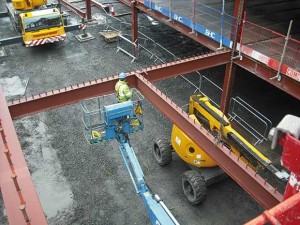 BHC used a dedicated erection gang for each building 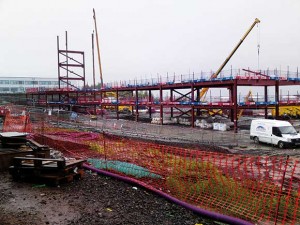 Steelwork contractor BHC also installed the project’s stairs and metal decking within its overall erection package. Using one mobile crane and one dedicated squad of erectors for each office block, the company erected the entire 2,500t of steel before the end of last year.

“Once the car park and podium was completed, the erection programme for each block was slightly staggered with C starting a few weeks before D which started before E,” explains Stephen Kelly, BHC Project Designer.

Towards the end of the steel erection programme BHC had an extra (fourth) squad on-site to erect the final elements of the car park undercroft steelwork.

Once each of the three office blocks was fully erected, BHC still had to install some more steelwork in two streets that divide the buildings.

“The street steelwork consists of canopies which we left to last to allow us better access between the blocks during the main erection programme,” says Mr Kelly.

Another element of the steelwork which was erected towards the end of the programme were a series of 15m high CHS columns which support the main entrance canopies for each block. These feature members will complement the main access points to the building’s and their aesthetic appeal has been enhanced with pin connections at the top and bottom.

Construction work on the EcoCampus was completed in February.

The Grade A offices’ specification 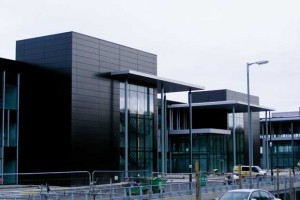