A bridge to the future

Providing Elgin with an iconic steel structure, the new Pansport Bridge is also part of an important flood alleviation scheme.

The replacement Pansport Bridge in Elgin forms an important part of Scotland’s largest ever flood alleviation scheme which is also Moray’s biggest ever construction project.

Straddling the River Lossie, Elgin is one of Scotland’s oldest towns and no stranger to flooding. Elgin’s river defences have been catastrophically breached four times in the last 17 years and, in order to prevent this happening again, new embankments and river walls are being constructed.

The £86M scheme has been funded by Moray Council and the Scottish Government, and is part of a larger £150M investment in flood alleviation works across the area. 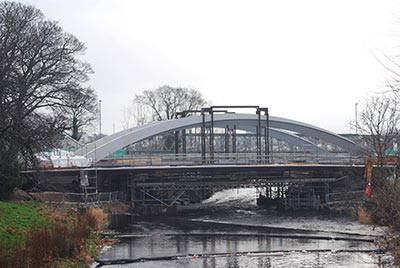 Steelwork is nearing completion in readiness for the summer opening 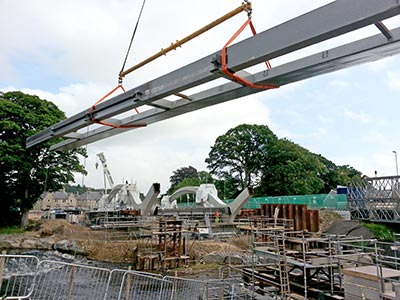 A walkway module is lifted into position

Main contractor Morrison Construction started on-site in April 2011 and is scheduled to complete the project in June 2015. One of the initial tasks was the demolition of the old Pansport Bridge and the installation of a temporary crossing that will remain in place until the new bridge is opened to traffic this summer.

“The new bridge is longer than the old one,” explains Allan Russell, Construction Manager for Morrison Construction. “As well as the river, it also has to span an adjacent relief channel that we’ve excavated to help with the flood alleviation.”

Cleveland Bridge began erecting the 75m long bridge last August, once the piling programme had been completed and the central pier and abutments installed.

The bridge is a two-span double arch structure with a suspended deck. The arches are constructed from fabricated plate trapezoidal boxes that provide support for the deck via 16 x 55mm diameter cable hangers. The main carriageway is located between the arches, with segregated pedestrian walkways outside of them.

Erection, which was reliant on a series of temporary trestles placed in the river and channel, began with the arches. Each of the double span arches was divided into five sections for installation.

“The 25t central nodes which connect the two spans of each arch to the central pier were the first pieces to be installed,” says Dominic Charlton, Cleveland Bridge Project Manager.

The remaining four sections for each arch were then installed, with each section connected via a Cleveland Bridge designed landing bracket positioned inside of the box girder.

“Once each section of an arch was positioned on a bracket, only a minimal amount of welding was needed while the crane held it in place,” says Mr Charlton. “This meant the erection was quicker and we needed less temporary works.”

Preassembled cassettes, consisting of two crossbeams, connecting secondary beams and bracing were then lifted into place to form the bridge deck.

A slab was then cast on top of the steelwork and once this was completed the permanent cable hangers could be fully loaded to support the bridge deck allowing the trestles to be removed.

Cantilever sections are connected to the deck to provide support for the segregated pedestrian walkways.

To minimise the number of crane lifts, the walkways were fabricated and transported to site in modules measuring 4.8m wide with lengths varying from 15m to 21m.

“In order to lift the walkways, the heaviest of which was 52t, we used the largest cranes we could safely position on-site,” sums up Mr Charlton.