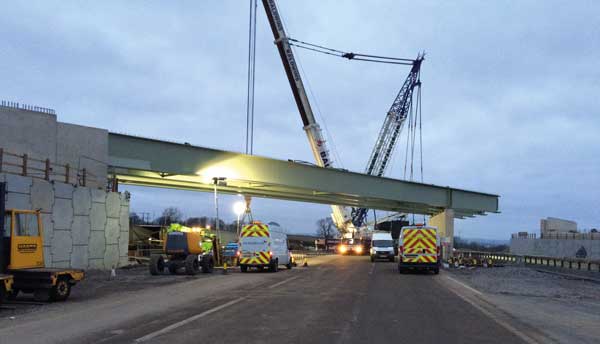 Now under a new management team, Cleveland Bridge UK has reported profits of £2.5M for the financial year ending 31 December 2015.

The company said this is the first profit the Darlington-based steelwork firm has returned in four years, reflecting the success of the current management team in turning the business around over the past 12 months.

Turnover at Cleveland Bridge UK, which is owned by Al Rushaid Petroleum Investment Company, increased in 2015 by 53 per cent on the previous year to £51.5M.

Cleveland Bridge UK has secured a number of UK and international projects for 2016 and 2017, which it said will support further turnover growth for 2016.

These projects include an extension to the M74 motorway in Scotland, the redevelopment of London Bridge Station and the A6 Manchester Airport Relief Road.

The company is part of the significant Forth Replacement Crossing, Scotland’s largest infrastructure project for many years, with the fabrication of the bridge’s North and South approach roads.

Currently the company is involved in the widening of the A1 in North Yorkshire with the fabrication of steel girders for the construction of bridges across the main carriageway (pictured).

Cleveland Bridge UK Managing Director Chris Droogan said: “The efforts of the new management team, together with the commitment of our workforce and the support of our owners, have enabled the business to return to profit.

“Cleveland Bridge UK has been a cornerstone of the British steel industry for more than 150 years and we are building on that legacy and global reputation by implementing innovative practices and production methods that will deliver further growth in UK and international markets.”