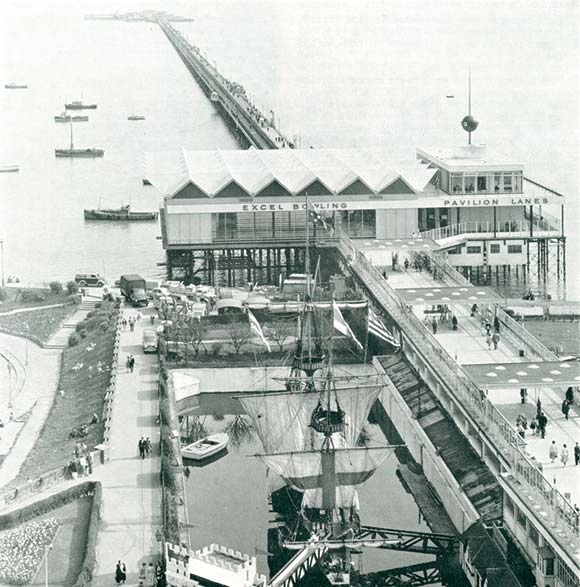 Occupying a unique position over the sea, the Excel Pavilion Lanes Bowling centre at Southend-on-Sea has a frame of structural steelwork with box section metal columns taken onto a continuous steel ground beam running round the perimeter of the site below deck level, this arrangement providing an equal distribution of point loads from the structure onto the pier columns. For the roof, 8 ft. deep compound beams of structural steelwork span the entire width of the playing area avoiding the use of internal columns between lanes. Architects: Silverton & Welton, Southend-on-Sea

‘ . . . a steel frame was chosen (because) it was the most economical method of spanning such a large area without any intermediate columns and only by using steel could the Centrle have been erected and clad in such a short time.’ (Extract from letter received from a prominent firm of architects).

From Building with Steel,
February 1963

So rapid has been the growth of popularity of ten pin bowling that all over the country promoters have gone into action. Eager to enjoy revenue from their new ventures these promoters have demanded completion with the shortest possible delay. To meet this demand the obvious choice has been structural steelwork. 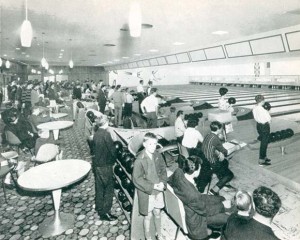 Typical scene in a Top Rank bowling centre viewed from the control desk. Elaborate electronic equipment to ensure smooth efficient operation, plus excellent standards of catering and comfort have helped to make bowling popular with people of all ages.

Bowling centres have been erected as straightforward new buildings, in combination with new cinemas, as additions to existing cinemas and as conversions of obsolete cinemas. For all four types, structural steelwork has been used in the majority of cases. Typical examples are to be found at Hanley, Litherland (Liverpool), Bexleyheath and West Bromwich.

Hanley is a combined cinema and bowling centre using some 400 tons of steelwork. The main auditorium is 56 ft. high by 103 ft. clear span and has a steel framed raking floor to form the cinema floor. The basement is completely given over to bowling with 24 lanes from the back to the front retaining wall. The area to the side of the main auditorium and over part of the bowling area is a car park. The front block consists of a three-story office building to one side with a combined entrance to the cinema and bowling centre to the other. Erection took ten weeks for the main structure with about two weeks for various small extras and revisions.

Litherland is a conversion of a cinema carried out by putting in an intermediate floor. The cinema was not long enough for the lanes so that the existing gable had to be removed and the building extended by 40 ft. The bowling centre has twenty-two lanes.

The stanchions on the ground floor were placed approximately 12 ft. from each side wall and the floor above was carried on cantilever beams to avoid interference with the existing side wall foundations and to reduce floor beam sizes. Erection was completed in two weeks.

Bexleyheath is a new bowling centre of twenty-four lanes adjoining and connected to an existing cinema. At ground floor level is a car park and the first and second floors are fitted for bowling. The building is 165 ft. long by 82 ft. wide, the floor being of two equal spans with a centre line of columns and the roof being a pitched clear span. Both gable ends are hipped. Weight of steel is approximately 180 tons and erection took five weeks. 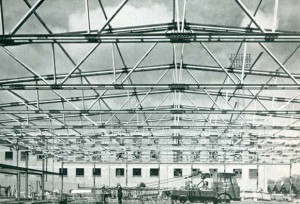 West Bromwich. The structure, a straightforward new bowling centre, was erected in three weeks. The roof was quickly added so that work on the interior could be carried out under cover with total avoidance of delays of any kind and was required to give a clear unobstructed spans of 116 ft. This was achieved by the use of large span steel trusses of unusual design, with site connections carried out by means of high-strength friction-grip bolts.

The two-storey front portion of the building contains entrance halls, bar and restaurants and the mechanical equipment rooms. Here the use of Universal Beam and Column sections enabled the framework casing to be much simplified. 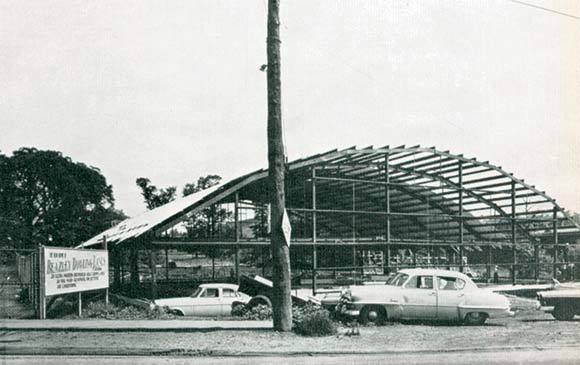 Seen in the course of construction in the City of Dartmouth, Nova Scotia, is a bowling centre of structural steelwork exported from Britain. The building is 114 ft. in span by 11 ft. high to eaves and 117 ft. long.