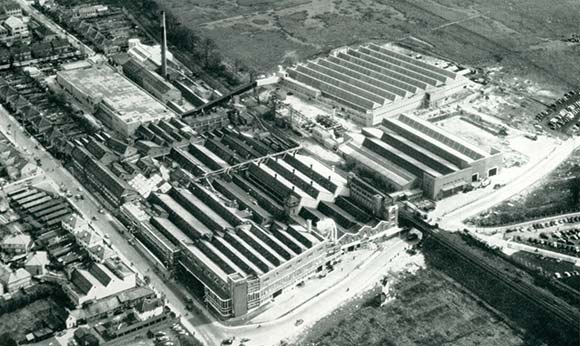 The reconstructed and extended Watford works of Sun Printers Limited have attracted visitors from the printing industries of the United States, the Soviet Union, Germany, Japan, Switzerland and indeed many other countries throughout the world.

The first stage in the programme involved raising the existing roofs and consulting basements under 14,500 sq. ft. of the existing factory to accommodate large new printing presses. The existing presses had to be kept in operation in half the area throughout the work. 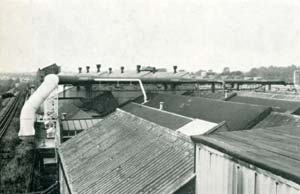 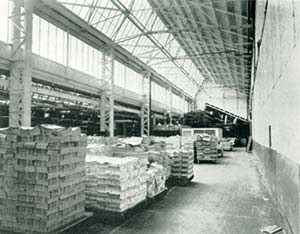 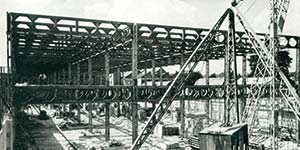 Basement excavation work was carried out without interruption to normal factory production. 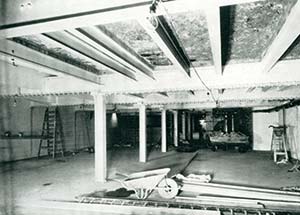 The Vierendeel girder was adopted as the base of structural design in the process printing block since the basic requirement of the building was for wide column spacing, no beams and room for and ductwork.

The new high roof was supported in 27 twin lattice stanchions extending from basement to 28 ft. 6 in. above the main factory floor level. The stanchions were constructed so as to allow temporary free passage of the existing gutters which remained in position to serve the old roof until the new roof was completed and watertight.

The building work progressed in six distinct operations. Where existing printing presses had to be kept in operation they were protected by dustproof and watertight screens; the old roof was left in position during building operations and the new roofs rolled over the top.

On completion of the new roofs the presses were then  shut down and covered over for a few days while the old roofs were dismantled. The whole operation was carried out in approximately 15 months.

While this work of raising the roofs was going on, a steel lattice frame had to be erected over them to carry the 150-ft.-long 7-ft.-diameter solvent collection ductwork. This ductwork had to be carried across the railway line to a new absorber plant erected on the other side.

During the period of this development various basement excavation works were carried out. These sometimes involved underpinning live printing machinery, but in the main this work was done by screening off the existing factory at ground floor level and excavating from ground level down to new basement level. Temporary arrangements were made to underpin the existing roof stanchions as the work proceeded and these were picked up on the new ground floor steelwork during the course of erection.

The next stage of development was to construct a large process printing block of some  75,000 sq. ft. designed ultimately to have 4 storeys, although only two were constructed at this stage. The design of this building, carried out in conjunction with the London firm of consulting engineers Walter C. Andrews & Partners, was unusual in that the Vierendeel girder, very seldom used in this country, was adopted as the basis of the structural design. This building is an excellent example of the economical use of structural steelwork in conjunction with reinforced concrete.

This combination was adopted to meet the basic requirements of the building which demanded a wide column spacing and clear headroom with no beams, as well as accommodation for a multiplicity of services and drainage pipework and full ventilation ductwork, without the dust traps these services usually involve.

For these reasons a steel Vierendeel girder design 4 ft. 6 in. deep was used on a column grid of 30 ft. by 27 ft.  with girders spaced at 9-ft. centres. Columns had steel angle cores to facilitate erection of the main structure and were finally enclosed with reinforced concrete.

The top and bottom booms of the girder were used to support preformed reinforced concrete floor sections with cast in-situ areas. This afforded homogeneity of construction and created a box formation to give a completely flat ceiling with void space to accommodate all service pipework, ductwork etc.

Running concurrently with the above work was the extension of the paper warehouse department which had previously been constructed in reinforced concrete. Owing to the restricted time element it was decided to construct this extension of some 12,000 sq. ft. using a steel portal truss type design of 45 ft. span supporting a 1½ ton overhead travelling crane. The hole of this work was carried out in 4½ months.

The overall development work was concluded  with a single-storey factory on adjacent land on the south side of the railway. This building provided some 100,000 sq. ft. for general printing purposes. Considerable thought was given to the roof design, the requirement being unimpaired northlight with accommodation for ventilation ductwork.

To meet these requirements an unusual type of northlight truss was designed to span 32 ft., the south slope of which formed a truss supported on the top and bottom boom of a lattice girder spanning 48 ft. The south slope was undersheeted with a Melamine-faced plasterboard to give a smooth soffit and provide a void space for services.

Connecting this last development with the main building on the north side of the railway and enclosed conveyor structure some 320 ft. long was erected which also carries service piping from the main boiler house. Here the most interesting construction was the section of approximately 90 ft. spanning the railway land, a 50 ft. section of which had to be constructed and clad on the ground alongside the track and hoisted into position during a Sunday when the railway line could be closed.