Keeping within a height restriction 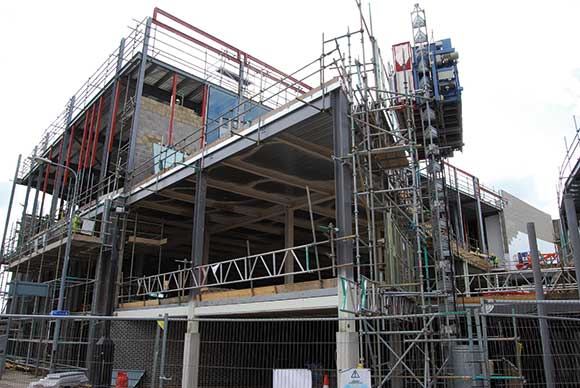 The main entrance will also link directly into the existing Swan shopping centre.

The new steel framed Swan Leisure Centre will form an integral element of Eastleigh’s town centre regeneration programme. NSC reports from a project not only constrained by a tight site but also an airport’s flight path.

The Hampshire town of Eastleigh was once one of the UK’s main railway towns, servicing and manufacturing rolling stock for the Southern Railways. Unfortunately this industry has taken a backward step in recent times and these towns have had to diversify and attract alternative industries to their locations.

Eastleigh is however fortunate that it is on Southampton’s doorstep and consequently benefits from this city’s industries and commerce. Southampton Airport is also only a couple of miles from Eastleigh town centre, providing job opportunities as well as a unique conundrum to contractors. 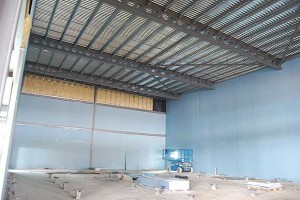 The flight path in and out of the airport is directly above Eastleigh, so the town is completely low rise as all buildings are restricted to no more than four storeys high.

This restriction is playing a major role in the ongoing town centre regeneration programme which has as its centrepiece a new Swan Centre leisure scheme. The project falls just inside this envelope height restriction and its top (fourth) floor is actually the maximum permitted height.

The project consists of the new extension to an existing shopping centre including a ground floor car park, a bowling alley and restaurants on the first floor, a second floor with more restaurant or retail units, and a nine screen cinema complex on the third floor. The project’s roof, or fourth, level will house plant and projector areas for the cinema.

Although the project will have a mall which links directly into the adjacent shopping centre, the development is structurally independent with only minimal tie-ins between the two.

The height restrictions also apply to tower cranes, as they are usually viewed as permanent structures. This impacted on the project and led to a change in design from concrete to steel.

“Originally the design was for concrete structure up to level 3 with steel framing for the cinema floor only,” says Chris Ames, Project Manager for main contractor Warings. It was decided that there would not be enough craneage capacity allowed on site to feed the required concrete and the design was changed to a complete steel-framed structure.

“Using steel formed the basis for our tender,” adds Mr Ames. “We need fewer cranes for steel and the one tower crane we do have has a temporary height waiver.”

Once the design was confirmed, Warings started work on site during July 2007. The first task was
to bridge and cover up a large service yard which serves the adjacent shopping centre. 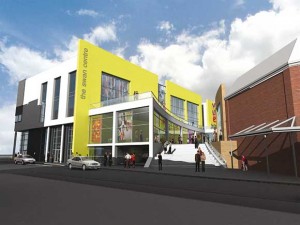 The majority of the project’s footprint was originally a car park, but the service yard in one corner had to remain open throughout the construction programme.

“We basically had to put a lid over the yard and then build the rest of the steel frame off of this,” explains Mr Ames. “This allowed trucks to use the service yard continually while the project was live.”

Steelwork contractor Frank H Dale initially erected a frame over the yard in September and then returned in November to erect the majority of the steelwork. While the frame over the yard was being erected the contractor tarmaced the remainder of the site, forming the car park floor and creating a base from which cherrypickers could work off for steel erection.

“There are some long 14m spans over the yard,” comments Mr Ames. “Trucks need to be able to turn around and so no internal columns were allowed.”

The overall design may have changed from concrete to steel but the site still remained tight and hemmed in on three sides by roads and the fourth elevation by the existing shopping centre. The site’s location didn’t impinge on the steel erection at the beginning as their was plenty of room for materials storage. As the job progressed, however, space began to decline and Warings obtained permission from the Borough Council to temporarily close one side road for the duration of the construction work.

Robert Pragnell, Project Partner for structural engineer Gyoury Self, says one of the challenges was actually fitting all of the required levels within the permitted height envelope. “We used the Corus Slimdek system for the first floor slab above the car park and this saved at least 400mm.”

Except for the area around the service yard the ground floor level of the project follows a grid pattern of 8m x 10m. This then changes to a 8m x 16m grid for the bowling alley level and increases further in the cinema floor to encompass spans of up to 18m. 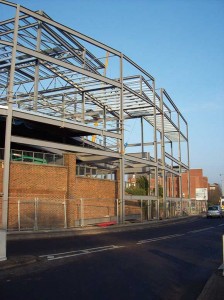 Space is at a premium on a site surrounded by roads and existing buildings.

To accommodate the required column free areas, Gyoury Self designed, and Frank H Dale erected, long span Westok beams throughout the upper levels of the project. To accommodate the high loadings from the large grid patterns some larger than usual columns were installed.

Because of the differing grid patterns and the long spans there was an issue of where the structure’s stability bracing could be located. “Cross bracing is located around the perimeter and we have a movement joint down the middle of the project,” explains Mr Pragnell. “This effectively makes two independent structures.”

Another design issue was connected to acoustics and how to stop noise penetrating the Centre as well as permeating between the different cinema screens and exiting the building.

To aid acoustics and dampen sound the cinema raking seating areas are independent from the main frame, with no steel to steel connections. Each partition and external wall has 500mm acoustic insulation, while a ‘floating slab’ was designed for the cinema level’s floor.

The Swan Centre is scheduled to open by the end of the year.