Taken from Build with Steel 1969 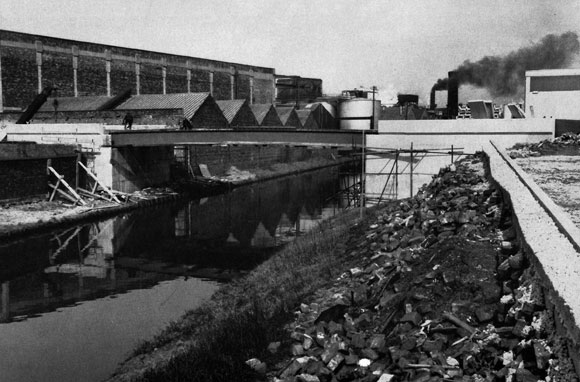 Erection of bridge after erection steelwork

The only railway site available with suitable connections in the area was at Trafford Park adjacent to a motive power depot which was to be closed. Existing road access to the site, however, was very poor and it could not be improved because of the position of Manchester United F.C. Ground and adjoining premises. The solution was to construct a completely new access to the site from Westinghouse Road on the other side of the Bridewater Canal. This scheme entailed the building of a bridge over the canal and the demolition of some premises of the Springfield Warehouse Company through which the northern approach to the bridge would pass.

The design of the bridge presented no great difficulties; the span, 61ft between bearings, is moderate and the skew, 17°30’, not large. A simply-supported welded steel plate girder bridge on piled concrete abutments was therefore decided upon. The question of maintenance naturally had to be considered and, in view of the limited headroom of little more than 12ft above water level, it was felt by the Chief Civil Engineer, London Midland Region, British Railways Board, that here was an excellent opportunity to gain experience of using a corrosion resistant, or weathering, steel. Such steels had been successfully welded for a number of bridgeworks in North America but there was no knowledge of their behaviour in this country and, although it was intended to use Cor-ten B steel produced under licence in Great Britain to the specification of the United States Steel Corporation it was considered desirable to call for welding tests before making a firm decision to order it. Consequently, the BCSA arrange for comprehensive tests to be carried out by the Welding Institute (formerly the BWRA). The results of these tests having proved satisfactory, British Rail decided to have the bridge at Trafford Park fabricated in Cor-ten B steel and the necessary materials were ordered. 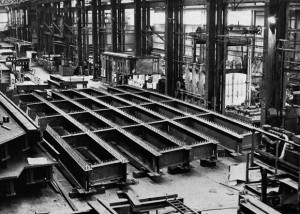 The bridge consists of seven welded plate girders, 63ft long at 5ft centres, with 24in × 9in welded I-section diaphragms of ½in plate flush with the top flanges. Each girder, 2ft 8in deep, is fabricated from a web plate 29¾in deep and ½ in thick, a top flange plate 12in × ¾in and a bottom flange comprising a plate 11in × ¾in welded under another 12in × ¾in plate. The total weight of Cor-ten B steel is 33 tons.

Stud shear connectors welded to the top flanges of both girders and diaphragms ensure composite action with the 8in thick concrete deck slab which is surmounted by a bituminous waterproofing membrane protected by a layer of quarry tiles and an asphalt wearing surface laid with a camber of 3in to both sides of the 24ft wide carriageway. An initial camber built into the plate girders provides for longitudinal falls from the centre of the bridge. The girders were welded up complete with diaphragm brackets, stiffeners and shear connectors in the shops, where a complete trial assembly of the steelwork was made before delivering the components to the site. All welds are ¼in fillets and all site connections are made with 7/8in diameter high tensile bolts in 15/16in diameter holes. The bolts and washers are zinc plated and the nuts are cadmium plated. Site erection was carried out with the aid of a mobile crane.

The design of the bridge was carried out by the Chief Civil Engineer, London Midland Region, British Railways Board, whose permission to publish this article is gratefully acknowledged.