Posted on September 1, 2004 by NSC in Commendation, SSDA Awards

The Phoenix Initiative is Coventry City Council’s most extensive city centre regeneration project to date. The £20M scheme, jointly funded by the Millennium Commission and Coventry City Council, has created an attractive journey from the Cathedral Quarter down the Museum of British Road Transport, tracing the city’s thousand year history along the way.

The City Council, with its architects, has drawn up designs for the city that have created new spaces that are both imaginative and functional. Priory Place, set to give Coventry something to rival Birmingham’s Brindley Place with café bars and new city centre housing, and Millennium Place, a fantastic new open plaza capable of hosting all kinds of outdoor entertainment, are the two civic spaces.

The Millennium Place incorporates two structural steelwork features, designed by architects MacCormac Jamieson Prichard with engineers whitbybird that are unique. The Place is overlooked by the twin arch structure of the Whittle Arch, and the spectacular glass bridge that spirals out of Millennium Place and provides an impressive new view of the city.

Whittle Arch
The twin arches each span 60m. They lean toward each other, and mutually support each other through a single connection point at the crown. The clear height to the crown is approximately 15m. The arches are fabricated from standard CHS’s spanning between the regular plate diaphragms. One family of tubes travels directly between the diaphragms to carry the axial thrusts and bending moments, another forms a series of spirals between the diaphragms and these carry the shear forces and torsions that exist under the different loadcases. The structure is clad with stainless steel sheet, perforated so that the sinuous organic nature of the structure remains visible. The diaphragms are in fact annular, again to enhance light flow through the structure and to enable it to be lit at night.

The arch follows the tradition of Frank Whittle by pushing the use of technology. The arch geometry was initially set up in the 3D computer drafting package X-Steel. It was then directly transferred into the finite element package LUSAS. The deflections were calculated and these were directly transferred back into the X-steel package so the pre-set, or pre-cambered, form of the structure was directly available to the steelwork contractor. 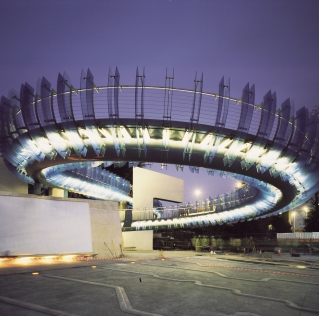 The Glass Bridge and Ramp
The bridge snakes out of the Millennium Place through a 360 degree spiral ramp and takes pedestrians 3m over a medieval city wall and the restored Lady Herbert Garden before making a gentle landing in the garden of International Friendship.

The bridge and ramp take their name from the glass fins which envelope the parapets but the structure is very much in steel. The main spine of the ramp and bridge is a large diameter tube that was pre-bent to the various radii needed to form the profile of the bridge. The main engineering feature of the structure is the very large unsupported spiral that forms the ramp. This spiral would be very prone to excitation by vandals and as a result within the tube are three tuned mass dampers, sized to deal with the first principal mode of vibration. Again the finite element package LUSAS was used to analyse the structure and its modes of vibration.

This exciting project shows high quality steelwork as sculpture and structure on a civic scale.

The arch is formed of a pair of aerofoil section tubular lattices with perforated stainless steel sheathing, which are internally lit to provide a glittering shape in the night sky, while the bridge, with its unsupported spiral lower ramp formed of a tubular spine and coloured glass fins, is a fine example of a complex torsion structure which makes a strong visual statement.